I'm not the best housekeeper or the tidiest person. I've got papers everywhere, dishes in the sink, clothes on the floor, and an unmade bed. I have a very long-haired cat who leaves fur everywhere. I joke to men that "fighting entropy is a losing battle," but I'm starting to wonder whether my messy place is keeping me single. Obviously, if somebody's coming over, I'll make an attempt to clean up. But it occurred to me that maybe men see my place and think either I'm lax in my own personal hygiene (I'm not) or I'd be a bad girlfriend/wife. 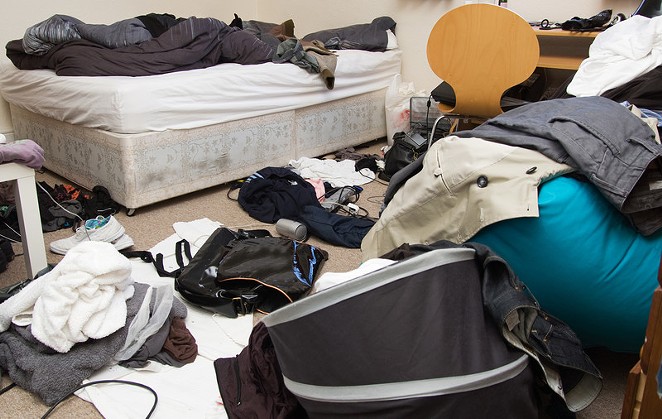 When a guy you're dating wants to buy you something, it shouldn't be a vacuum.

That said, there's being dirty (that is, unclean) and there's being untidy, and they're two different things. In research looking at relationship deal breakers by evolutionary psychologist Peter K. Jonason and his colleagues, 63 percent of men named a "disheveled or unclean appearance" as the single biggest turnoff in a potential partner. However, it's important to note that this measure was about personal hygiene, and you apparently don't have mossy teeth or BO that sets off CDC scanners.

As for your apartment, the real problem comes if the place crosses over from cluttered to disgusting. To understand why, consider the apparent function of getting grossed out. Evolutionary psychologist Joshua Tybur explains that disgust seems to have evolved to help us avoid pathogens— and the providers of their ground and air transportation, like boogers, vomit, dead bodies, and co-workers who like to celebrate "take your flu to work!" day. In light of this, priority areas to address would be the bathroom (especially the throne) and the kitchen. Also important would be policing the cat hair and rounding up any encrusted plates or week-old chow mein containers still loitering on surfaces.

Regarding whether you should also be spending more time tidying up—that is, organizing mere clutter—living life can be seen as a series of decisions you need to make about trade-offs. Economists explain this in terms of "opportunity costs" — the benefits you have to sacrifice when you choose one option (one way to spend your time, energy, or money) over another.

For you, for example, time you spend tidying up is time you aren't spending going out and meeting men (or just lying on the couch smoking a doob and watching the Apple TV screen-saver images floating by). Now, maybe TV 'n' toke time sounds frivolous. However, time spent relaxing isn't unimportant. If you work like a beaten dog, your body and mind are likely to take note and hammer you into taking a pause—through illness or depression.

To decide the level of cleaning and tidying you need to do, ask yourself how much of a luxury and how much of a necessity a boyfriend is to you. Depending on your answer—because even just clutter could put some guys off—you might decide that it's worth it to you to begin a daily cleaning routine, simply by picking up or wiping up 10 things every morning before you start your workday.

This advice is inspired by psychologist Karl Weick's insight into the motivational power of "small wins." Consider that being faced with massive, seemingly insurmountable problems— like "end world hunger," "get the Israelis to hug it out with the Palestinians," and, in your case, "keep the apartment spotless"—breeds dread in us ("aversive feelings," in psychologist-speak) and drains our motivation.

However, you could probably be kind of "yeah, okay" about doing 10 small tasks. (Some of these might be as minor as "pick up the sock that's spent the week vacationing on the living room floor.") Recasting the need to clean as a small set of daily tasks would yank away its power for dread production. In fact, chances are, through the "small win" of completing your daily 10, you'd end up feeling you accomplished something—which other research finds seems to have motivating effects throughout the day.

Finally, there is another factor to consider: truth in cleanliness. If you're likely to fall back into your old ways (at least somewhat), your home should not be so spotless and organized that you appeal to the wrong guy—the sort who measures so his decorative geode is in its rightful position on the coffee table. Should you attract a guy like that, it'd be best to confess to your sloberella-hood and give him time to see (and decide whether he can stomach) the real you. However, with guys with more moderate standards, by doing your daily 10, you should hit the mark—giving them the impression that you're holding off on sex because you're done with hookups, not because you probably haven't washed your sheets since mid-2016.