McDormand and Zhao take us to "Nomadland"

"Nomadland" is the antithesis of movies like "Green Book" and "Crash," which seem offended by the very idea of subtlety and instead use the brick of manufactured prestige to bash the head open of anyone looking for serious and meaningful ideas built around nuanced filmmaking. 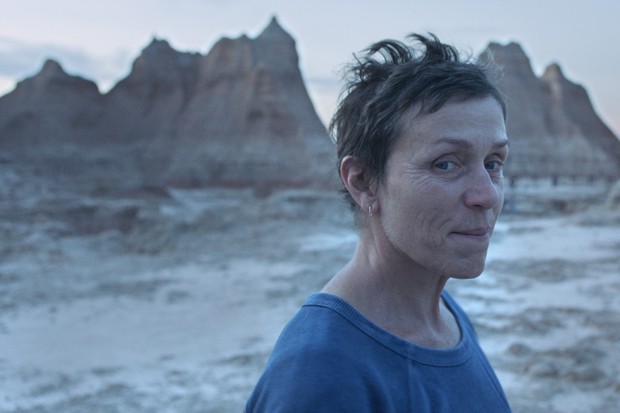 "Nomadland" follows the finest actress of my lifetime, Frances McDormand, as Fern, a woman who lost everything during the recession, including her town, her husband and any sense of purpose she once had. Now she lives in a van, driving around the country working at any temporary job she can find that keeps her feeling free, helpful and needed by others.

That's it. That's the movie: 100 minutes of Fern working in an Amazon boxing factory, selling rocks out in the badlands and meeting other nomads who tell her their stories. Zhao brilliantly fills the film out with mostly non-actors, real-life nomads that lend the film an authenticity that we haven't seen since the last time neorealist cinema died the death of a thousand cuts. In a way, Zhao completely has her cake and eats it too: "Nomadland" is almost a documentary when it focuses on the nomads telling about the economic disparity that led them to the life, but it's also centered around a movie-star performance from McDormand, who carries the movie effortlessly and with quiet and understated grace.

"Nomadland" has so much on its mind, yet it never feels preachy or false. This is a film about the American ideal of freedom and how that feels different to every living soul. This is a look at the American Dream for those who don't sleep much anymore. It's also a tender and achingly honest poem about community and connection, a deep dive into the frayed edges of society and a modern-day "Grapes of Wrath" where the Great Depression isn't just economic, but spiritual and psychological as well.

This is a film about the American ideal of freedom and how that feels different to every living soul. This is a look at the American Dream for those who don’t sleep much anymore. It’s also a tender and achingly honest poem about community and connection, a deep dive into the frayed edges of society and a modern day “Grapes of Wrath” where the Great Depression isn’t just economic, but spiritual and psychological as well. tweet this

When I was watching "Nomadland," I was surprised by its unassuming nature. Zhao (who not only writes, directs, edits and produces, but is working on a Marvel movie next!) has made something so unsentimental that it's hard to know whether she expects her audience to pity or envy Fern. We see and understand her restless spirit, but she has many other options available to her. She doesn't have to travel in the van; she chooses to. She's a nomadic shark, terrified that the moment she quits moving, she'll die.

Earlier I called "Nomadland" a poem and that's really just the best way I can describe it. It's a film that almost borders on experimental with its impressionistic brush strokes painting America as a brutal wilderness of wide-open spaces while also acknowledging the intimate humanity we find from strangers. As I watched the movie I felt like it was a searing examination of the things life takes from us while we're living, but once it ended I realized that it just as desperately wants to remind us what we give each other before we go.