The Mean Streets of Winter

Heavy snow years can cause headaches for commuters, pedestrians and the City

The end of winter came in like a lion, covering Bend with record snowfall in February. Even though the snow's largely stopped falling and the temperatures are rising, plenty of reminders from the storm remain on roadways and sidewalks. That's left many wondering about the protocols—if any—city officials follow for snow removal. 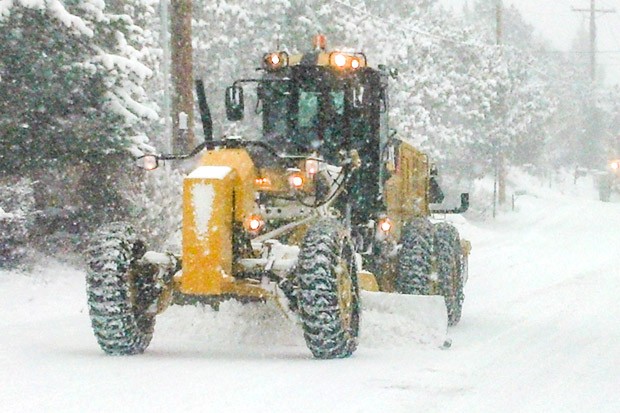 Some might wonder, Why don't they plow my street? Others wonder, Why hasn't a business cleared their sidewalk of snow so I can walk or get my wheelchair onto it? While not always apparent—and in the case of sidewalks, not always enforced—the City does have policies and codes around both.

The cost of this year's contracted snow removal was about $316,000, according to David Abbas, City of Bend streets and operations director. The City budgets $250,000 for contractors, but last year's mild winter left some money in the bank.

"We are OK on the budget so far, as we had some saving from last year, which helped," Abbas said. "We operate on a two-year biennial budget."

The City says its first priority for winter maintenance is clearing major collectors and arterials, like Greenwood Avenue and Third Street. Second-most important are collector streets that provide access to priority one streets. Residential streets are the lowest priority.

"When we call the contractors in for help, they focus on the Priority Three/local streets," Abbas said. "Depending on the storm, we can be plowing the same streets multiple times. It is not a 'plow once and be done' if it is still snowing.

"Once the snow storm resides, we then work on the other areas in town as needed and resources allow if the priority streets are in OK condition, such as bridges, roundabout pedestrian access, snow clean up, slush management, drainage, etcetera."

Abbas said the City Council has discussed using salt on the roads in the past, but there hasn't been a hard push for using it in Bend, or in Oregon for that matter.

"ODOT (Oregon Department of Transportation) has been doing some studies on the use of salt and using it in limited cases," Abbas said. "The driving force for using any salt would be safety driven in certain circumstances or conditions."

Bend City Code requires sidewalks to be cleared of snow no later than the first six hours of daylight after snow has fallen or accumulated in commercial areas, and one day in all other areas.

"It is the adjacent property owner's responsibility to clear their sidewalks," Abbas said.

According to the U.S. Department of Justice, to comply with Americans With Disabilities Act, "towns must maintain in operable working condition those features that are necessary to provide access to services, programs, and activities—including elevators and lifts, curb ramps at intersections, accessible parking spaces, ramps to building or facility entrances, door hardware, and accessible toilet facilities." This includes snow removal, as well as debris removal.

"When weather conditions such as snow and ice limit or prevent access to services, programs, and activities, a town that houses programs in an accessible facility will have to maintain access to ensure that those programs are accessible. Maintenance of accessible features would include the removal of snow from accessible parking spaces, parking space access aisles, the accessible route to the accessible entrance, and accessible entrances. Although temporary interruptions in services due to bad weather are expected, alternate services should be provided if snow and ice cannot be cleared in a timely manner," stated the DOJ.

It is possible for the City to fine people for not clearing sidewalks, but Abbas said he was unaware of any fines being issued this winter.

A State of Emergency

On Feb. 28, Gov. Kate Brown declared a State of Emergency in Deschutes and nine other counties in Oregon, due to the severe winter conditions that caused power outages and damaged roadways. As part of the declaration, ODOT was enabled to activate the Federal Highway Administration Emergency Relief Program to help repair transportation systems.

According to ODOT's Peter Murphy, ODOT can't perform maintenance for Bend like helping to plow the streets, but "in the event there's structural damage, the city can apply via our local agency liaison and ODOT could help."

Water supplies back above normal

Even though the heavy snow was a pain to navigate the streets and caused schools to close, there's a bright spot on the horizon.

Even with the snowpack being above normal, the NRCS said water supply is something to still keep an eye on, as over 60 percent of the state remains in moderate to severe drought.

"If the next few months stay cool and stormy, streams will experience normal season flow and drought will continue to decrease," the NRCS stated in a release. "If there are sustained warm periods and long stretches of dry weather, the water supply forecasts will likely decrease."