There is no larger owl on the European continent than the Eurasian Eagle-owl, Bubo bubo. You have to travel several thousand miles to see one in the wild. In appearance, it looks like our native Great Horned Owl on steroids.

But now, you can drive to Sunriver Nature Center and ask to see its new ambassador: a young, just-about-to-fly, Eurasian eagle-owl. 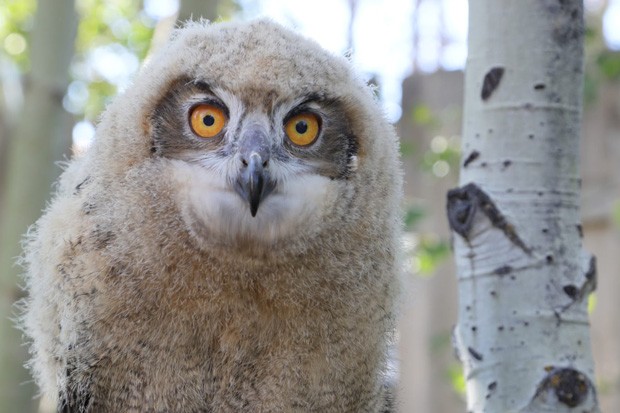 In all the owls I've enjoyed out in the wild, I've never had the pleasure of meeting the Eurasian eagle-owl. I've never been to Europe, so that leaves me with the largest owl on my Bird Life List being our native Great Horned Owl.

But I got know what the eagle-owl was all about back in the early '50s, not too long after I arrived in Oregon from Connecticut, riding my faithful 1947 Harley '74. However, in order to talk about that first eagle-owl experience, I have to begin at the beginning, so please stay with me...

One spring day in '52, after moving in with Dean and Lilly Hollinshead on their Timberlane Ranch in the old Jones House on George A. Jones Road in Bend, Ed Park walked into my life, with whom I enjoyed doing things in Nature, right up until he went out among the stars.

Park was a good pal of the Shumways, sheep ranchers out in the Alfalfa neck-of-the-woods. That connection led him to discovering a Great Horned Owl nesting in the debris of an old hawk's nest, located in the top of a juniper that had toppled over.

Park, a writer for huntin' and fishin' magazines, loved to share things he found while searching for nature subjects. Upon our arrival at the ranch, he explained that all I had to do was climb up the roots of the juniper, get my camera ready and just walk up to the owl's nest.

The moment I appeared on the trunk, momma owl lifted off her eggs and began hooting at me. Then she went to hissing and barking, glaring as she stood taller and taller on the nest until she looked like she was on tip-toes.

I was shooting pictures all the way to the nest and was about 6 feet from the blaring bird, trying to focus on her beautiful, angry eyes, when suddenly something struck the right side of my head. It felt like a rock armed with teeth. The pain was excruciating on the side of my head as I was falling sideways into the dead limbs of the juniper.

The ends of stout limbs tore into my clothing, ripping holes in the cloth and my skin beneath. By the time I felt the hard surface of the rocky soil on my poor back I was in bad shape.

My arms hurt, my head hurt, there was blood — my blood — all over my face and in my eyes, and I was having trouble focusing. At that moment, Park appeared, breaking off limbs and getting close enough to help me to my feet.

As we stood there looking at each other, he started to grin, and then broke out in a joyous guffawing, muttering between breaths, "They did the same thing to me..."

The eagle-owl is known as the largest owl in the world, with a wingspan of up to 6 feet and weighing 9 to 10 pounds—the size and weight of our native Golden Eagle. tweet this

When we went back looking for my camera, we finally found it about 20 feet from where I had come to stop, busted wide open with the roll of film lying beside it, and Ed said, "Damn, Jim, I forgot to pay her for the pictures I took, and I guess they're both still mad at me..."

On our way to the doctor in Bend he told me what happened as I got to that point of no return on the tree. He said the show the female put on was to keep me focused on her, and when I reached the point of no return, it was the signal for the male —hiding close by — to attack.

As a result, part of my right ear had to be sewed back on.

Now — at last — we come to the eagle-owl. While I was healing, and Park began to look for other owls to photograph, a birder and his wife from Great Britain came into our lives; one Alan Baldridge and dear wife, Sheila. They wanted to place the Great Horned Owl of North America on their Bird Life List.

That would have been all well and good, except for the continual tales Alan dumped on us of his experiences with the fabulous, nothing-in-the-world-like-it, amazing giant of Europe, the Eurasian Eagle-owl. He went on continually from one story to the next regarding that best owl of the birding world, albeit its incredible ability for gobbling up everything from black bears to crocodiles.

As Park and I sat listening to story after story, it finally got to be too much. Park said, "Let's show him the Shumway nest," and grinned.

As we drove to the site, Ed and I told Alan glorious tales of the talents and abilities of our native master of destruction and death, the Great Horned Owl.

Park and I watched Alan climb up on the juniper trunk and slowly walk toward the nest, camera to the ready. The female was already on her feet, swaying side-to-side, hooting, barking and hissing. We knew what was coming, but poor Alan didn't. Then it happened.

Like a feathered rocket, the male left his hidden perch in a small juniper nearby, and with unerring aim, slammed into the right side of the poor guy's head, just like he did mine.

"Kerblam!" and away went Alan, toppling into about the same bunch of limbs I did.

As Park and I stood there laughing our silly heads off, Sheila, protective of her dear husband, shouted, "You bloody Yanks are a couple of savages! That's me old man you almost killed!"

To make up for that indignity, I took Alan and Sheila to Fort Rock and got them to camp overnight at the edge of a beautiful Greater sage-grouse lek so they could put that beautiful bird on their Life Lists.

The Eagle-owl is known as the largest owl in the world, with a wingspan of up to 6 feet and weighing 9 to 10 pounds—the size and weight of our native Golden Eagle.

"We are excited for the many new opportunities that the Eagle-owl will create for students, families, and our visitors to connect with nature in an up-close and personal way," said Abby Rowland, executive director. "As the COVID-19 pandemic continues to present challenges for our organization, the Eagle-owl is a welcome addition to our collection and reaffirms our mission to inspire others to understand and cherish the natural world."