Automation is ahead for the cannabis industry

Prior to the pandemic, I was able to make a trip to Las Vegas for the annual Marijuana Business Conference. Insofar as the event is the largest of its kind in the world—with more than 27,000 attendees from more than 60 countries—I wasn't able to capture the full scope of my experience in a column's length. There were more than 1,000 exhibitors, meaning more than 1,000 booths, some larger than my apartment. I checked out a ton of products and services and saw products that ranged from basic ("it's a bag for weed") to highly specialized ("it's a cannabis-based blockchain").

But I saw one item that was as impressive as it was potentially chilling for a workforce that often gets overlooked, but can make or break the flower that we all enjoy: trimmers. 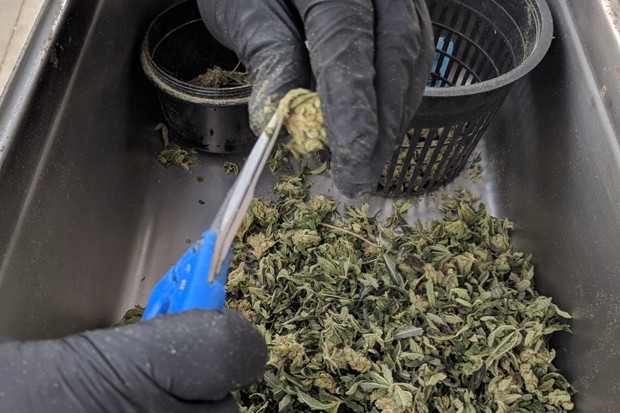 Thanks to trimmers, the weed that you buy at a dispensary can put its best face forward with confidence and appeal, like any of us do after a great haircut. Taking a branch and transforming it into a pile of High Times-centerfold-ready buds is an art form, which is why a talented Edward or Eunice Scissorhands can take home $20+ an hour (plus the coveted scissor resin that builds up on their scissors' blades). Trimming can be hard on the back, hands and wrists, and it's long hours of repetitive work. Some trimmers charge by the pound, others by the hour, but like anyone, they charge.

Something that doesn't charge (unless it just needs a charge) is a machine. There already exist trimming machines in the industry that can reduce or eliminate the need for hand-processing by weak, unreliable meatbag humans. The problem is that machine-trimmed flower often looks like a blind man on meth used a weed whacker to shear a flock of sheep. Only worse, because I don't smoke sheep. (Anymore.)

Massachusetts-based Bloom has assembled a team of geniuses in the not-at-all-frightening fields of military robotics, automation and product development. For our sake, we should hope they are using their combined powers for good, because this could pretty easily be turned into the first cannabis-related episode of "Black Mirror." But it's impressive and worth considering when the financial health of a licensed grower could turn on having an option to cut down on or even replace its workforce of human trimmers.

Bloom has been working on a beta version of a precise automated trimmer. Really precise, as in 97%. I'm happy to hit that rate of success when performing the act of walking, and Bloom's machine is pretty remarkable in not only accuracy, but how it got there.

ZD Net nicely captures the detail when it reports, "The robotic harvester uses machine vision and path planning algorithms to isolate clusters of flowers. The system incorporates a back-lit time of flight camera, which measures depth, as well as a machine vision camera. [CEO Jon Gowa says], 'We use a conventional neural network and a supervised machine learning set.'" OK, I don't really know what that all means, exactly, but it looked cool AF in their demo at MJBizCon. Screw you, Tony Stark.

As The Verge explains, "The company had employees hand-color over 6,000 images of marijuana—leaves one color, the flowers another—so they could feed the photos to teach the algorithm which one is which. Eventually, the robot will be able to trim three times faster than someone doing the job by hand. At least, that's the hope."

Pro: Growers get to reclaim some of the finest scissor hash ever, and they won't have to share. Trimming can be a boring pain after a few hours. I don't have a jet pack, but shouldn't I have a robot that trims my weed?

Con: Could result in hard-working, skilled trimmers losing their jobs. Oh, and this machine is going to be placed onto wheels, and someone might be able to hand-color 6,000 images of your head into its military robotics designed AI learning system so that the machine will find you and restrain you in its vibranium claws while it gives you a "haircut."