The Next Gig Thing | The Source Weekly - Bend, Oregon

The Next Gig Thing

The ways in which people spend their money has changed drastically over the past decade. Mobile phones have become instantaneous portals to whatever services we need, whatever products we want, whatever food we crave. Uber, Lyft, UberEats, AirBnB, DoorDash... anything we desire is (literally) at our fingertips.

Those who cater to those needs are members of a unique workforce. Rather than work traditional jobs for company owners or corporations, they work on a gig-to-gig basis, usually directly for the consumer. According to the Bureau of Labor Statistics, roughly 11% of American workers were working the gig economy full-time in 2017. The number of those working part-time is far greater (55 million people altogether). More than 36% of American workers are part of the gig economy. That number is projected to jump to 43% by this year.

What is the gig economy? Josh Lehner, an economist with the Oregon Office of Economic Analysis, explained the difference between freelance work and this recent economic shift. "I really think we need to work on defining gig economy," he wrote in an email to the Source. "To some people it means anyone with a 1099. But contractors, consultants and freelance designers have been around for a long time. Remote work is growing over time, but remote work isn't the gig economy."

According to the National Association of Counties, there are two main types of gig employees—those who provide labor, and those who provide goods. Labor providers are generally lower income. A report by CNBC states that rideshare and delivery drivers typically make between $12 and $15 per hour, after costs. Goods providers are generally higher income, usually at least college educated. Offered goods might include clothing, arts and crafts (think Etsy), or household supplies. Usually, both labor-providers and goods-providers have other jobs or full-time careers, and "gig" to supplement their income.

“Working for Uber and Lyft is like being at a dead-end job where there’s no room for growth.” —Zachary Avis tweet this

"When it comes to the self-employed, average incomes tend to be lower than average wages for workers in traditional jobs. There are a lot of people who do a little side work—I teach a class every couple of years—so when you average out all the people with a little bit of extra income with the smaller section of full-time workers, the average is lower than straight wages for traditional jobs," Lehner wrote.

Zachary Avis, a Bend local who's been driving Uber and Lyft part-time for over a year, notes that while the extra income is helpful, earnings are inconsistent. "Pay is dependent on several variables," he said. "How many drivers are on the road and the number of potential clients. If there are too many drivers for the number of customers in the region, it waters down the amount of money you can make. If you want to make decent money, you have to stay out later than the other drivers."

Avis also works at Costco, and with a looming pay increase, he's excited to fully transition out of the gig economy. "Costco has several high-scale pay increases for me down the road, plus ample benefits," he explained. "Working for Uber and Lyft is like being at a dead-end job where there's no room for growth." 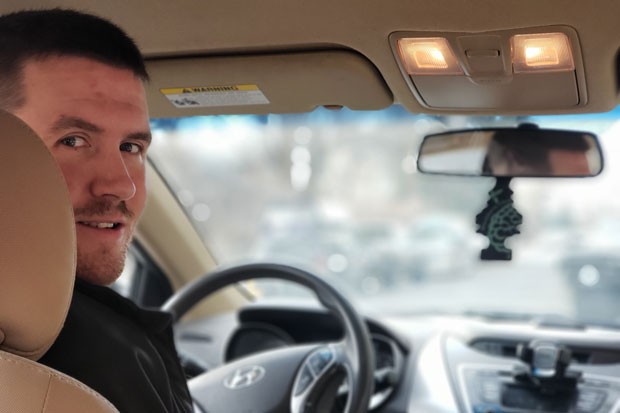 Tom Thurman, a local who drove for Uber full-time for five months in 2017, explained why he got out of the gig business almost as soon as he entered it. "I was making about $500 a week, but I was driving between six and seven hours every day," he said. "You can make more depending on how much time you put in, but you're still making just about minimum wage." Now, Thurman works as a server at McKay Cottage.

"I make way more money now," he said. "It's more reliable, less 'feast or famine.'" He also mentioned that driving full-time became very tedious very quickly. "I didn't enjoy sitting in a car for such long periods of time. I got burnt out on the same conversations, the small talk. 'Where are you from? What brought you to Bend?'" Cleaning puke out of the back of his Camry on St. Patrick's Day was also not ideal, he said.

Despite the fluctuations in pay, the gig economy does allow for more flexibility. People can decide their own hours and take on as many "jobs" as they feel comfortable with. However, lack of benefits combined with an inconsistent income leave many "gigsters" in the lurch.

For now, it looks like gigging will be mainly utilized as a way for lower and middle-class Oregonians to support their existing incomes. The State of Oregon Employment Department reported that for the past two decades, Oregon workers were more likely to hold two or more jobs than their national counterparts. "In 2018, 110,000 Oregonians held more than one job in addition to their primary job and were considered to be multiple jobholders," ODE reported. "The multiple-jobholding rate—the proportion of multiple jobholders among all employed workers 16 years and older—was 5.5 percent, which was above the U.S. rate of 5.0 percent."

Lehner suggested that while the economy will grow along with the population, a major shift won't come anytime soon. "I don't envision that these on-demand jobs will encompass a huge portion of the labor market. The flexibility is beneficial for some people; they can supplement their incomes when they need to. However, most people prefer steady paychecks. Yet if more and more people end up actually doing these types of jobs full-time, that means more competition for traditional employers to find workers. This would cause employers to raise wages further to attract and retain employees, and make traditional work more appealing."