Dogs have been taking a bite out of crime (sorry, couldn't resist) for over 120 years. First used in Belgium around 1899, dogs have assisted law enforcement in activities such as apprehension, tracking, drug detection, evidence collection, search-and-rescue, poachin, and even arson, to name a few. Highly trained teams of dogs and their handlers work together, communicating though verbal and nonverbal alerts. 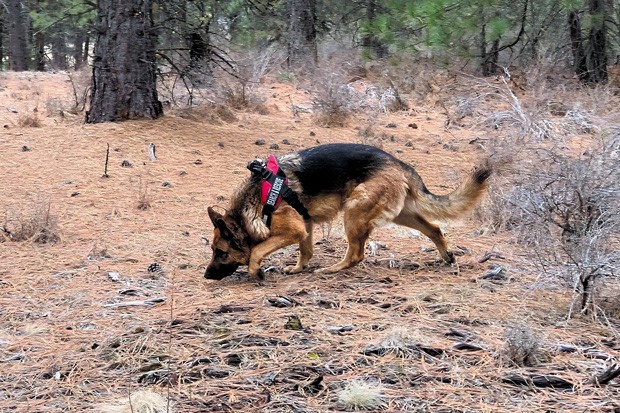 "We need to be able to read each other, and most importantly, we need to trust each other," said Jenny Reindel, team coordinator for the Deschutes County Search and Rescue K-9 team and owner of SAR dog, Hunter. "You will hear handlers everywhere saying, 'Trust your dog''."

Here are three of the working K-9s patrolling the streets and wildlands of Central Oregon.

A few years ago, Oregon Wildlife Foundation Executive Director Tim Greseth was approached by ODFW and was asked if the Foundation would be interested in supporting a wildlife canine. "This hadn't been done in Oregon yet, but was a proven tool in other states," said Greseth.

Eventually, OWF raised and granted OSP F&W over $26,000 to buy, train and provide support for Buck. "The reason the board and directors were so invested in the K9 program, is the need to address more aggressively wildlife crimes in the state of Oregon," added Greseth. 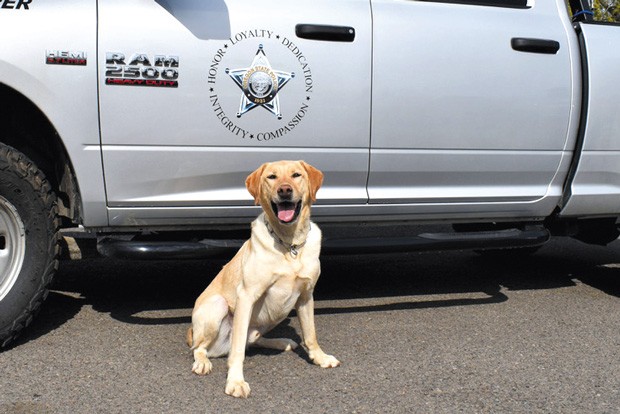 OSP hopes to add two more dogs to the program in the future so there's one K-9 assigned to each region.

Three-year-old Labrador retriever Buck is the first and only Oregon State Patrol Fish & Wildlife Conservation K-9. Buck and his handler, Senior Trooper Josh Wolcott, are based in Springfield, but get deployed around the state, where Buck is trained to detect scents of various wildlife species, humans and firearms. "A dog is such a great asset to our program as we don't have many troopers to cover a lot of miles in the state," said Wolcott. "Buck's nose is instrumental in helping find people or tracking a human scent connected to a wildlife crime," said Wolcott. In addition to his great nose, Buck's temperament makes him an ideal ambassador to educate children and adults about poaching. "I think the record is 16 kindergarteners stuck to him," added Wolcott.

Ladybug is a seven-year-old Belgian Malinois narcotics K9 with the Bend PD. She was reassigned to Patrol Officer Robert Pennock, who took possession of her in December of 2018. "I'm a dog fan in general, and I got to work with her previous handler on my team—so that gave me a little more experience and exposure to the process and the way the dog works," said Pennock. Typically, a handler works with the dog throughout the canine's career.

Ladybug is certified in Oregon, Washington, and California—which reflects her narcotic-detection reliability. "She is specific on three odors: methamphetamines, cocaine and heroin," added Pennock. Though Ladybug's job is to sniff out drugs, she and many of the other city and county K-9s serve dual roles as bridges between law enforcement and the public. "That connection to the community is important to the K-9 program, especially here in Bend, which is a very canine-friendly city," added Pennock.

DCSO SAR K9 Hunter is a five-year-old German shepherd nationally certified in both land HRD (human remains detection) and live-area search. "While he is a happy, affectionate dog at home, Hunter is all work when on a mission," said Reindel. Hunter is able to do scent-specific work, such as locating a person through a scent article in an area where other people are present.

A deployed SAR K9 team will also have two "flankers," in addition to the dog and handler. "Flankers are field support members who train with the K9 team regularly, are specially trained to help with navigation, communication and safety, so that the handler can focus primarily on watching, and caring for the dog," explained Reindel.

Former team coordinator Carol Sanner had developed a decision matrix for SAR mission management to refer to when determining which missions lent themselves for dogs to be deployed. "Each mission is unique," said Sanner. "There's no cookbook method."

A significant amount of time, energy, and funding is invested in the K-9 and SAR dog teams (donations are greatly appreciated!). Handlers and dogs continually train to maintain skills and certifications. A well-trained dog's ability to quickly locate evidence or lost people by scent is significant in terms of personnel hours or immediacy. "It's pretty awesome to watch these dogs and see nature defeat technology," said Officer Pennock.

I can see the mini series now: The Nose Knows.