A tale of the great horned owl, part 1

Well, it's that time of year (again). If you're fortunate enough to have a home close to the same habitat great horned owls need to make a living, you're also hearing them now as they cuddle up and sing love songs to each other. The owls usually begin their courtship in November, about a football field apart, the male beginning his love song with a soft but meaningful deep, searching, four-part hoot-hoot-ta-hoot-ahhhh, roughly translated as, "Here I am you lucky sweeties." That can go on way into the end of December and into February.

If there's a female within hearing distance — and he knows there is, since he'd never waste his time — she'll return his, "Hey, honey, let's get together," with a high pitched, hoot-hoot-ha, which can be loosely translated to, "You betcha sweetie pie." The courtship is underway. 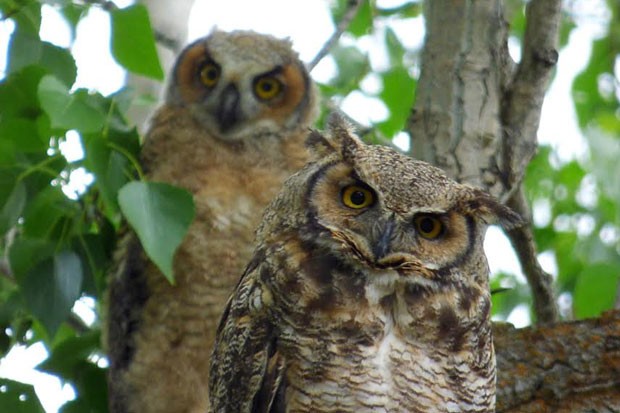 My wife Sue and I, camped out on a late winter eagle survey, recently had the pleasure of listening to this lovely love song duet for an entire evening. Each time we'd wake up, the two love birds would have moved closer and closer. Then, as the sun began to break up the darkness in the east, the two were perched right next to each other, hooting harmoniously and probably grinning at each other.

Yeah, I'm romanticizing their calls a little, but when they're right overhead and it's a cold night and you're cuddled up with your wife in a nice warm sleeping bag, well, what do ya' expect?

Why these owls put such significance on this season of the year to mate up and begin making their choice for a location to nest is completely out of my bailiwick. All I know is not one of our native owls go to the trouble — that most birds do — to create a substrate we call a "nest."

All the small owls—including the Western screech, flammulated, Northern pygmy and Northern saw-whet—take woodpecker cavities and/or man-made nesting boxes to nest in. They don't carry sticks, grasses or any nest-making materials with which to help make these cavities into a nest; they depend on what the woodpeckers and other cavity-nesters (and users) have left behind.

By the same token, all the larger owls, including the great horned, great gray, long-eared, short-eared, spotted (and now barred) owls use other bird nests or none at all. For example, short-eared and burrowing owls are ground nesters. The short-eared is on the surface, but the burrowing uses old underground animal dens, like that of the American badger. 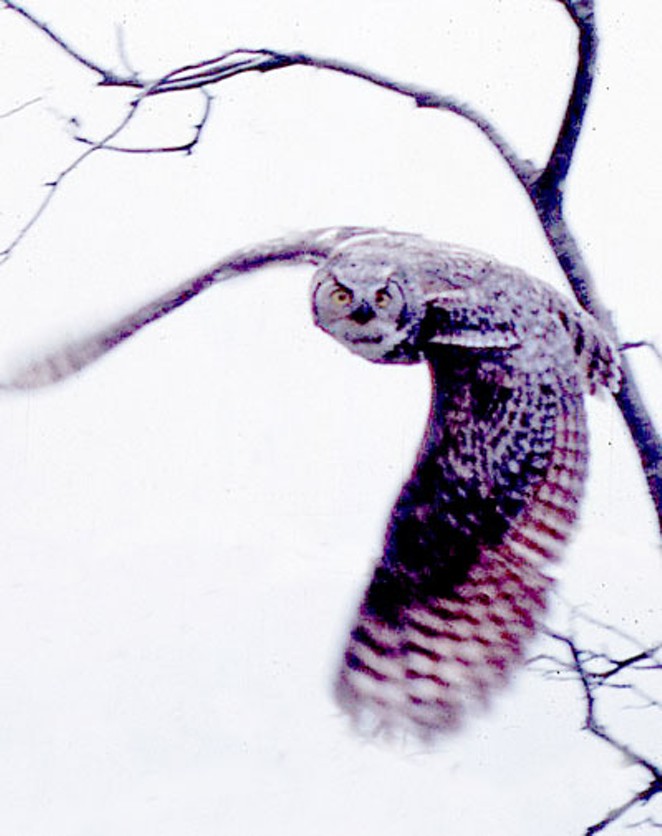 Their young grow so fast they usually become too big to all stay in the nest for long, so they either fall —or are pushed — out. However, they have enlarged feet and leg muscles which provide them the equipment to climb the "jackstraw" understory where they spend the rest of their early weeks being fed by parents as they grow flight feathers.

The great horned owl uses (as in, sometimes "steals") nests from bigger raptors, such as soaring hawks and eagles. Stealing a nest from a golden eagle usually doesn't work, however. The owls get started nesting very early in spring, which in some areas is mid-winter. The eagles don't begin nesting until late February, which is bad news for the owls! While checking eagle nests in March, my wife, Sue and I have found adult and juvenile owl feathers and bones in eagle pellets, meaning that nest-stealing didn't end so well.

Stay tuned for part two of this story next week!