The Old Man and The Crater

Diving deep into the history of Crater Lake, Oregon's only national park

"A lake is a landscape's most beautiful and expressive feature. It is earth's eye; looking into which the beholder measures the depth of his own nature." 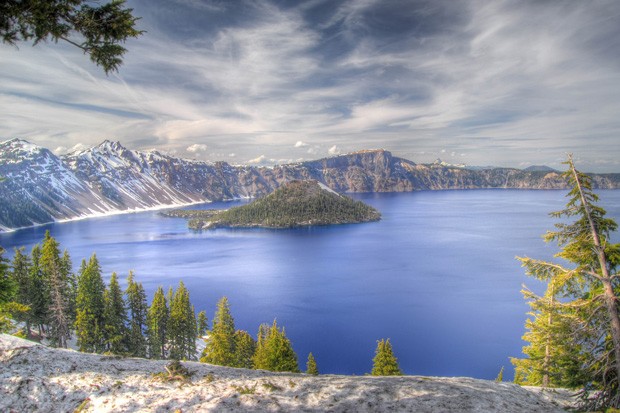 Soaring cliffs of snow-capped lava rock, emerald and golden green flora, juxtaposed against richly colored aquamarine water and expansive sky. Standing still, some 8,000 feet high, the deepest lake in the United States plummets beneath, carved out in the belly of a volcano—all 5 miles of it— its essence neatly captured in the near-perfect reflection mirrored back. A deeply spiritual site for the local Klamath tribes, it is awe-inspiring, breathtaking—and worthy of all the superfluous adjectives hikers, scientists and others bestow upon it.

And it also happens to be the only national park in Oregon.

"The summer is filled with sound," says Michael Gordon, a world-renowned New York composer who spent the better part of a year creating an orchestral piece inspired by Giiwas, the indigenous name for the lake. Gordon assembled more than 40 orchestral members and Klamath tribe vocalists and drummers to record a piece celebrating the National Park Service's centennial in the park.

"You hear birds chirping, you hear trees falling and snow melting, thunder and rain." But as he points out, "You can't understand this place until you come back in the winter," noting that for nearly nine months out of the year, Crater Lake is buried underneath deep snow.

Its average snowfall is 43 feet per year, among the snowiest places in the U.S., according to the U.S. Department of the Interior. It also happens to have one of the shortest tourist seasons—where the site is fully open—of any national park.

"It's only like this, two months out of the year. Then it starts snowing...In the winter it's so quiet, I could hear the snow land on my cheek," said Gordon.

Filling a nearly 2,148-foot-deep caldera, Crater Lake lies in the depths of a dormant volcano known as Mount Mazama, once over 12,000 feet high. A cataclysmic eruption around 7,700 years ago blew the top off, spilling 30-mile-high columns of pumice and ash. Tons of molten rock spilling over caused the summit area to collapse, forming a volcanic depression—an effective catch basin for subsequent snow melts and rainfall.

Second in depth in North America only to Great Slave Lake in Canada, Crater Lake's deepest point is 1,949 feet. Its unique, picturesque water clarity and blue hues come from an absence of silt. No river inlets or outlets means no sediment or mineral deposits are carried into the lake. The collected water is replaced on average every 250 years. Native people have known of its beauty for thousands of years, referring to it as highly sacred, only to be used by medicine men and shamans. Non-natives began to know of it around 1853, first calling it Deep Blue Lake. 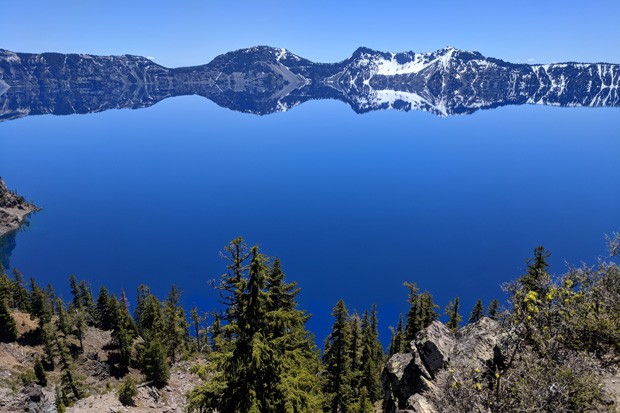 Clarence Dutton, who painstakingly recorded the lake's staggering depth for the U.S Geological Survey in 1886, by rowing a boat for over a month, noted, "As the visitor reaches the brink of the cliff, he suddenly sees below him an expanse of ultramarine blue of richness and intensity which he has probably never seen before, and will not likely to see again."

Legend has it that when the first photographs of the lake emerged, film developers apologized to park visitors, noting they "must have oversaturated" the blue color in their prints.

"...It's like a two-dimensional landscape painting from the romantic Western era rather than actual three-dimensional scene you're looking at unfolding in front of you," says Craig W. Ackerman, Crater Lake's superintendent. Steward of the park for over 10 years, Ackerman adds, "When you see it in the summer, and the conditions are perfect, the water looks like it's been painted inside the caldera, but you're actually looking at the real thing."

He even has a term for when visitors first see it.

"We call it the 'sucking air' experience. When people crest the rim for the very first time, you hear them catch their breath because it's almost surreal," he says.

"Crater Lake must be seen to be appreciated properly. Photographs simply cannot depict the majesty of the lake in its setting, the depth of the blue."

"When you get to peer over the rim and see that water for the first time, it's pretty show-stoppy," says Jillian Webster, recalling her first glimpse of Crater Lake while she was hiking the entire 2,650-mile Pacific Crest Trail in 2015. Though the PCT runs 33 miles through the national park, it doesn't officially run through the caldera. Many hikers choose to do an alternative trail, designed in 1995, looping onto the rim for 6 miles. 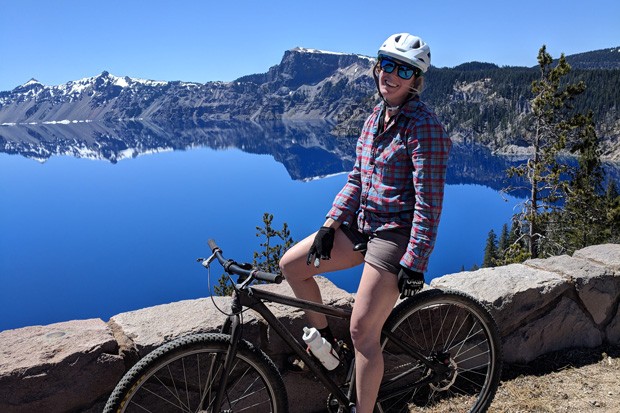 "The trail before there is dry and honestly not that memorable," says Webster, "Until you get to the rim... A blue to make all other blues jealous. There's a big dry stretch just after you go to the visitor center, so (our) packs were heavy with water, anticipating the 26 or so miles of dry trail ahead," she recalls. "There were loads of people compared to other parts of the trail in the area, which as a thru-hiker can be a little annoying. Sharing trails is not our forte."

Annual visitor numbers have surged more than 23% since 2015. Over 720,659 visitors visited the park in 2018—though in recent years, tourists have been trending toward more off-season visits. Roughly 74,000 people visited in the winter, compared to 110,606 between May and October. Overall, the park has seen a three-year decline in summer visitors.

Wildfire accounts for at least part of the shift.

Three wildfires have burned in remote areas of the park in the last two years. Nearby fires have also affected visibility in the region. In 2017, for example, hazardous drifting smoke caused the closure of more than a dozen trails.

"There was a lot of smoke in the area from other fires, and that was certainly impacting the park, but it was also impacting the region," says Marscha McCabe, park spokesperson. "I think people kind of had the word that this part of the country was on fire, so maybe decided to go somewhere else."

Indigenous people have always regarded Giiwas as an important and sacred area, used for vision quests and rites of passage for the Klamath tribes for thousands of years. Early written histories, recorded by the National Park Service, state that when early European settlers approached local tribes about the lake, "No one would acknowledge such a lake existed ...We learned from a medicine man that this place was looked upon as sacred, and death came to any Indian who gazed upon the lake."

We’re told by our elders that it’s not a place to go and mess around. It’s a place to come for ceremony, or power, or if you need something.” – Taylor Tupper tweet this

"My father always told me that Giiwas—which means spiritual place—is Crater Lake," says Taylor Tupper, of Chiloquin, Oregon. Tupper is a member of the Steiger Butte Singers—a family drum and singing group with a special connection to the lake. "I go up there to gather healing and prayer.

"Because Crater Lake is in our aboriginal territories...We don't go up there very often because it is a spiritual place. We're told by our elders that it's not a place to go and mess around. It's a place to come for ceremony, or power, or if you need something."

In drought years, for example, pilgrimages were made to Crater Lake and other places known for "powerful spirits in order to fill small skin sacks with water that was then poured ceremoniously over the marshes in hopes of restoring them to life."

Though science is often pegged against the supernatural, Crater Lake's resident aquatic biologist, Mark Buktenica—who's researched the depths of its water for over 30 years and helped guide a Deep Rover research expedition—still has many unanswered questions. One of them involves a 30-foot waterlogged hemlock tree that has been mysteriously bopping around the lake for more than 100 years—vertically.

With the right wind configurations, the tree travels several miles around the lake daily. It's almost completely submerged, except for 4 feet of it. The NPS commissioned a study in the 1930s to track its patterns, noting that in one particular day, the "Old Man," as it's called, traveled more than 60 miles in one day.

When the Deep Rover expedition was underway, Buktenica notes that the Old Man was tied to the shore so as not to interfere with the scientists' work. When it started snowing in August, he says, "Our senior scientists went out quietly one evening and released him from his bondage...The weather cleared up right after."

He laughs, "I think, maybe some questions should remain unanswered. That maybe it's part of the human condition to believe in a little bit of mystery and the interconnectedness of all things."

As told by Taylor Tupper

"Monadalkni, the evil Spirit Chief of the Below World, observed a maiden of remarkable beauty named Loha, the daughter of a Klamath chief. Monadalkni dispatched his most trusted emissary, Skooks, to propose marriage on his behalf. Loha backed away in fear and cried out, "No! I will not leave my family, not to live in a mountain!

"Monadalkni shook like thunder and stormed off in a violent rage, throwing lightning bolts as he went, causing the mountain to explode with such great force, the top blew off. The mountain shook and the earth trembled until finally, K Muka Match—the Creator—forced Monadalkni back underground and collapsed the volcanic debris on the entrance to the underworld, creating a giant crater where the mountaintop used to be.

"As the rains came to fill the empty crater with water, the sacred lake became known as Gii-was, a holy place to the Natives, who kept the area a secret to outsiders for thousands of years." 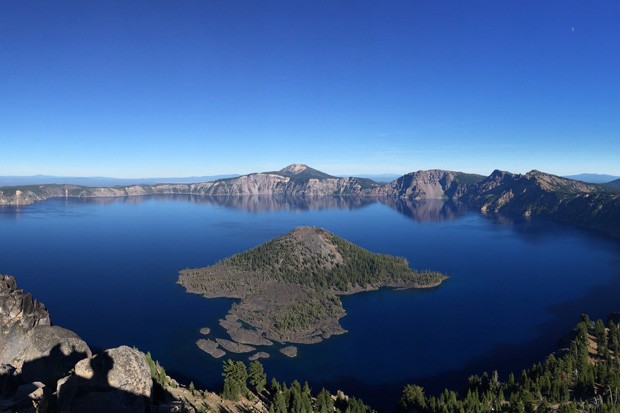