The Only Bungeo-ppang in Oregon | Chow | Bend | The Source Weekly - Bend, Oregon

The Only Bungeo-ppang in Oregon

A visit to Seoul, South Korea, inspired Yoonmee Chang Walsh and her husband Brandon Walsh to completely change the menu at EMW Fusion. Gone are the pandos, the Korean-style pancake sandwiches.

"We were stuck with Pando," said Chang Walsh. "We are creative people and we wanted to move onto something else. We were trying to find a way to update the menu." 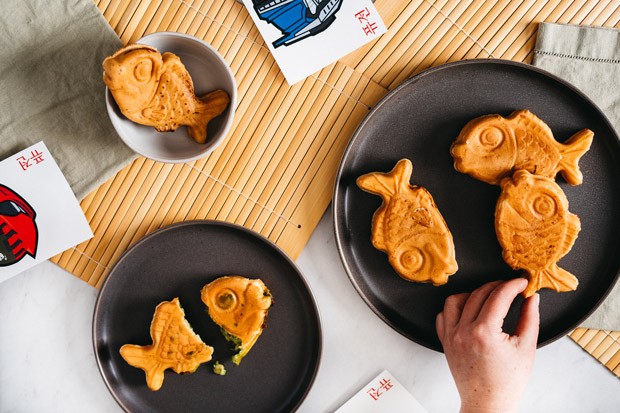 Both come from creative backgrounds. Brandon Walsh is a graphic designer; Chang Walsh an apparel designer. The couple met in Seattle when they both worked for Unionbay Kids. When Brandon Walsh got a job at Nike, they moved to Portland and Chang Walsh worked for Columbia Sportswear. The couple hosted barbecue parties mixing Korean and Western flavors. Chang Walsh said, "It just grew and grew." Some people even scheduled their vacations around it. "We got tired and quit our jobs, moved to Bend and bought a food truck," said Chang Walsh.

From pandos to fish pockets

"OMG, I need to get this machine to Bend," said Chang Walsh while visiting her mom in Seoul. A subway station had a fully automated dessert machine making small fish waffles filled with custard cream at the twist of a button. Those waffles are the fish-shaped bungeo-ppang—a popular street food in Korea.


The name translates to "carp bread," derived from the Japanese taiyaki, a fish-shaped dessert made with pancake or waffle batter. Taiyaki literally means baked sea bream, the fish the shape is named after. The book, "Bungeoppang Has a Family Tree," details how Korean bungeo-ppang started as a mix of Western waffles and Eastern dumplings, and how the Japanese taiyaki was an adaptation of Western waffles introduced in Japan in the 18th century. In both countries, red bean paste, made from sweetened azuki beans, is the most common filling.

Chang Walsh found the Korean company that makes the automated bungeo-ppang machines and ordered one last year. The machine arrived in November. The company sent someone to help set it up and train the couple how to use it. The company rep also introduced them to a waffle iron machine that makes larger bungeo-ppang.

"Brandon was really interested in it," said Chang Walsh. "We weren't sure if we wanted to do it on-truck. We did a tasting with friends and it went really, really well." With that, the couple converted their food truck and bought more waffle iron machines.

In February, the couple launched a new bungeo-ppang menu at the EMW Fusion food truck at The Podski on Arizona Avenue. The couple named their bungeo-ppang "fish pocket sandwiches," but also refer to them as fish puffs or fish-wiches. The batter they use is not very sweet. It's a Korean mix, with tapioca flour, so the fillings can go either savory or sweet. In true East-meets-West fashion, fillings range from Korean bibimbap to American favorites including macaroni and cheese and pepperoni pizza. I tried a macaroni and cheese-filled fish puff, expecting a heavy treat because of the carb-on-carb action, but it was remarkably light. Comparing between pancakes and waffles, the fish pockets are closer to a waffle texture, but not as crispy.

The fish pockets have the fun vibe of carnival food; happy food you can walk around and eat. The menu is divided into savory, vegetarian savory or sweet. Each fish-wich is $4.

You'll have to wait a little longer to see the automated custard-filled bungeo-ppang machine, as it's getting painted now. Chang Walsh said they'll cart the machine on a horse trailer to events. She's excited to have people, "see, hear and smell it. That's what I saw at the subway station in Seoul. It's more interactive that just the food. It's fun!" The little custard-filled fish puffs will come with chocolate or fruit dipping sauces.

Bungeo-ppang has gained popularity in Los Angeles, San Francisco and New York, but right now, EMW Fusion is the only place in Oregon serving it.