The Pathogen Of Least Resistance 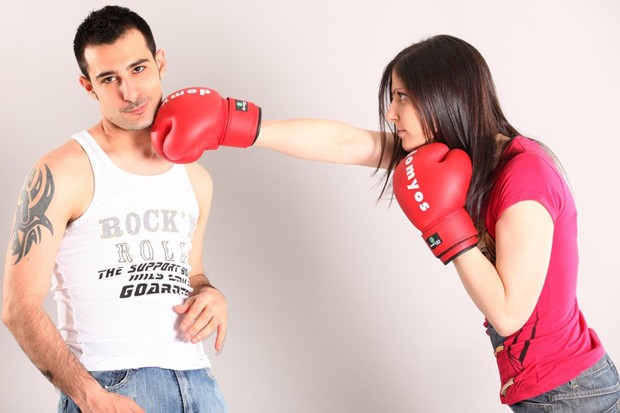 I live with my girlfriend, who's really picky about how clean and tidy the house has to be. God forbid I put a bowl on the dish rack that isn't perfectly immaculate or leave tiny bits of hair in the sink after I shave. She gets totally grossed out by small things that I don't think are a big deal. If this stuff is ridiculous, should I really have to abide by her rules? And is this a woman thing? Other girlfriends of mine have been like this, too.

It's nice when your girlfriend always has your back—but not because she's constantly two steps behind you with the wet mop.

Sexual disgust leads a person to feel creeped out about having sex with evolutionarily disadvantageous partners (too old, too closely related, or sporting a big pustule that screams STD.) Moral disgust leads us to be all "Oh, yuck!" about people who violate moral standards. And finally, there's the pathogen disgust your girlfriend's expressing, which protects us from bacteria, viruses, parasites, and toxins by making us beat a retreat from sick people, dead bodies, spoiled food, and bodily fluids like mucus, spit, and poo.

Evolutionary psychologist Laith Al-Shawaf and his colleagues call women's greater disgust sensitivity "puzzling in light of their well-documented immunological superiority." Though we think of women as more physically fragile than men, they actually have "stronger immune responses," which offer them "better protection than men from a variety of diseases" and "more vigorous defenses against bacteria, viruses, and... parasites."

However, Al-Shawaf and his colleagues have some evolutionarily driven hypotheses—informed guesses—for why women are more easily grossed out: (a) Women's bodies are basically the factories where both parents' genes get passed on to the next generation. (b) Mothers are also more likely to transmit infections to children. (c) Women have likewise had a greater role in "keeping children away from pathogens and teaching them effective disease-avoidance principles." (d) Ancestral women had a greater role in food cleaning and prep.

The researchers had a couple of hypotheses about men, too—why men evolved to have lower levels of disgust: (a) It serves men to "to convey immune strength" to attract babes and to "facilitate short-term mating." (Men's lowered standards for hygiene, etc., mean a larger pool of potential sex partners! This can be taken too far, as in, on a seriously yuckeroo note, let's just say it's typically men, not women, who engage in necrophilia...which is to say, who look at a corpse and see a potential hookup.) (b) As the hunters and warriors of the species, men need lower levels of disgust "related to blood, injury, and death" lest they be all "Shoot it with an arrow? But it'll bleed, and I pass out at the sight of blood!"

As interesting as all of this speculation is, for purposes of relationship harmony, the reason your girlfriend is more easily disgusted doesn't actually matter. Likewise, whether what she wants you to do seems rational isn't relevant, either—tempting as it might be to adjudicate this on scientific grounds, a la "Is a little encrusted whatever really going to kill us?"

Understanding this is important. A lot of unnecessary relationship conflict comes out of people thinking they need to stand up against beliefs by their partner that they find kind of Cuckoo for Cocoa Puffs. Often—assuming a partner's beliefs are merely annoying, not endangering—a wiser approach is acting on the principle that the facts matter vastly less than the feelings behind them.

In your situation, for example, what counts is that you're kind and respectful—meaning that you do your best to remember to clean up, especially in the bathroom and kitchen (major gross-out arenas)—simply because it's important to your girlfriend. And when you forget — which you're sure to do—apologize, making sure to validate her feelings: "I know this matters to you...I'll try to do better..." Hearing that you get where she's coming from tells her something—that she doesn't need to keep fighting to make you understand.

There's that saying, "Would you rather be right or be happy?" The truth is, you can be both—silently laughing to yourself about the absurd contradictions of humanity: Just because we ladies go "Uh-huh...whatever..." about the gazillions of microscopic germs reportedly living on our smartphones doesn't mean we can be all "No probski!" about the retirement community for bacteria that we picture on that food-globbed soup bowl you set on the dish rack.