The Peaceful Protests of Central Oregon ▶ (with video)

Organizers of the weekend's local demonstrations look to what's next

Saturday's Black Lives Matter peaceful protest in downtown Bend was organized in less than 24 hours. On Sunday, two more followed in Redmond and Prineville. On Tuesday, another protest started near Bend City Hall before moving from the Deschutes County Courthouse to Bond Street and back to City Hall.

The death of George Floyd—who died after a now-former Minneapolis police officer kneeled on his neck for nearly 9 minutes—has been a tipping point in the U.S., causing many to rally, and some to lash out violently across the U.S. over the past week.

In Portland, people broke into the Portland Justice Center and lit fires Friday night, among other damage. In Minneapolis, people lit the police station where the four officers involved in detaining Floyd worked.

In Central Oregon, the response was significant—but not as violent. Hundreds of people gathered near Greenwood Ave. and Wall Street Saturday morning, eventually doing an impromptu march from Wall to Bend's busy 3rd Street. Aquarius, age 21, said her desire to stage a peaceful protest went from idea to fruition in just one day, with the help of many others. She was thrilled with the turnout, but when people began to get rowdy and move from the sidewalk to the street, she said she was happy to see that request heeded. 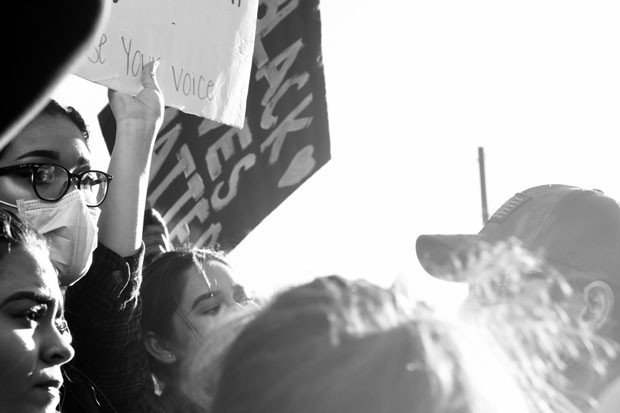 "I blown away that I could get such big of a crowd to listen to me. I never thought that my voice could bleed over hundreds of people," Aquarius, a former Bend Senior High School student and a graduate of the local Job Corps program, told the Source. "We're not going to make any headway with these riots. I understand that we're angry. I'm angry. I feel it. But I'm infusing my anger with love—the only way to counter hate is with love."

While the Bend protest was mostly peaceful, a few counter-protesters circled downtown in large trucks, blowing exhaust fumes on the crowd.

In Prineville, police say about 150 people gathered Sunday. There, counter-protesters were even bolder—blowing exhaust and also accosting organizers Amber VanDenack and Josie (who declined to provide her last name for fear of retaliation). Counter-protesters can be heard on a video, provided to the Source by VanDenack, saying "go back to Portland," and "this is our town" as the protest wrapped up. (See the video in the online version of this story.) Both VanDenack and Josie, who is a person of color, live in Prineville.

"We just wanted to say that we stand with Black Lives Matter, and that this can't keep going on—especially in Prineville," VanDenack said.

VIDEO: The altercation after the Prineville protest:


Both Aquarius, who launched the first Bend protest, and VanDenack in Prineville say they hope to hold a monthly protest in their respective cities. They both also hope to develop relationships with local police departments to keep conversations going around police brutality, training of officers and other areas of concern. As for other ideas, they both said they're working within their circles—now widened significantly—to come up with other ideas.

"We are begging people to understand that things are wrong," Aquarius said. "And my generation... we are the change. So many youth are behind me and I need them to understand how powerful our voice is."