When I married my wife, I married her friends, too. In an instant, I became their mover, their lifter, and their Starbucks butler. 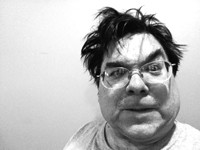 Shortly after my son was born, my wife's friend asked if WE would watch her children and her house while she and her husband jetted to the Caribbean to create another baby because the two in her house were lonely. So WE moved into her manse for a week with the plan that WE would wrangle her preschoolers while WE went through her medicine cabinet, her closet and her wine rack.

This house would make Martha Stewart roll her eyes. It was opulent. It was luxurious. It was ridiculous. Of course, I wasn't worried about being left in her house with her two children AND mine because my wife would be with me because WE were watching the house and . . . wife? Wiiiife? Hello?

Yeah, it was just me.

I spent a week in mortal terror as the children slung frosted Cheerios in every direction and peed in their sheets. But I handled it. I locked them in the basement.

My wife's friend's basement was wall to wall oh my god and blanketed hip deep with hand crafted Swedish gender-neutral toys. I drug in a crate of juice boxes and Cheezits and we watched cartoons and stayed away from the good china and all was well. Until I sat down on the sumptuous, well-tailored snow-white couch and there, where my shoulder sunk deep into the alabaster upholstery, was a hideous scrawling splatter of black ink.

"WHO MADE THIS MARK ON THE COUCH!?"

This is rhetorical question, natch. No kid in his right mind is going to answer me, much less admit that —

The little prince. The lord of the manse. My wife's friend's son, barely three and a half. I glare all the way through the back of his thin skull but he just beams up at me like ruining a $4,000 couch is no big deal.

High over our heads my wife's friend was arcing through the sky on her way back home to count her silverware and garden gnomes. Her limo was due at sunrise. I called my wife.

We were up all night. We went to Walgreens twice. At three in the morning, the spot faded to a dark gray. Around 5, it vanished. I fluffed the pillows and prayed.

The limo screeches to a stop at sunrise. My wife's friend prances into the house and we're all enjoying a glass of [unpronounceable snobbish something something] when my wife's friend flits away down into the basement. Her feet had barely graced the Berber when she squeals.

Well that's it. We're buying a couch. The friend comes up, staring at us with a look very similar to what I imagine she would level at a guy who'd just pooped in her wine cellar. We're reaching for our checkbook when she says, "Oh my God, how did you get rid of that old stain?"

I level my best Bruce Willis at her kid and seethe: "You said you did it."