The Politics of Climate Change

In Oregon, legislators have struggled to pass consequential laws to lower emissions. The recent Republican walkouts exacerbated that.

As Oregon and California set new wildfire destruction records this past week (3.1 million acres burned in California and 1 million in Oregon), climate change experts argue this is just the beginning.


“Climate change dries out the grassland and will continue to make summers longer and hotter, with longer fire seasons,” explained Brad Chalfant, founding director of the Deschutes Land Trust, which has been trying to buy the Skyline Forest to create more of a wildland-urban interface zone between Bend and the wider forest.


“The reduced snowpack in the Cascades means there’s less water available in the summer for soil and vegetation. Whether fires ignite while people are out recreating or from people who live near a WUI, or from natural causes like lightning, Oregon is likely to see a lot more fire in the future.”


Erica Fleishman, the director of the Oregon Climate Change Research Institute, explained that as the climate changes, drought comes more often and stays longer, creating fire-prone conditions. Also, mountainous regions like Central Oregon have been invaded by cheatgrass, a nonnative species that is highly flammable. 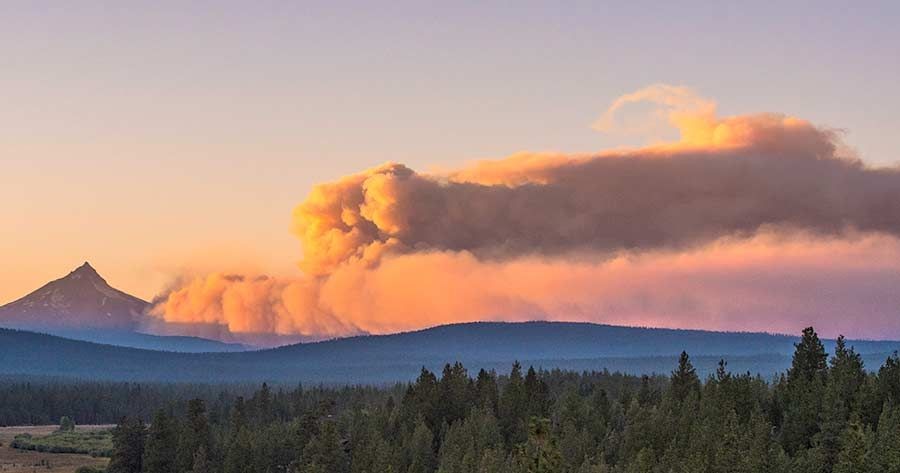 “The total annual precipitation in Oregon is not projected to change appreciably,” Fleishman said. “However, storms may become less frequent and more intense (which increases the risk of landslides in burned areas).”


Will the apocalyptic photos and reports from this past week finally be enough to convince the most ardent climate deniers that global warming is real? Even here in Oregon, the eighth-most liberal state in the union, legislators have struggled to pass consequential laws that would lower greenhouse gas emissions.


Democratic legislators have been working for the past 10 years to pass a cap and trade bill to limit carbon emissions in the state. This February, during the legislature’s “short session,” the latest version of the bill was introduced. It would require big polluters to pay for credits for each ton of greenhouse gas emissions they produce over a cap set by the state. The state would then use the money from the credits to invest in “de-carbonized” transportation, such as electric public transit buses and charging stations for electric cars. The goal was to lower emissions levels to 80% below 1990 by 2050.


Unfortunately, the bill was sabotaged by both House and Senate Republicans who walked off the job in protest (with the exception of Central Oregon Sen. Tim Knopp and Bend Rep. Cheri Helt). This is the fifth time a group Republicans have fled the capitol since May 2019 to obstruct bills that would easily pass under the current Democratic supermajority. The glitch is Oregon state law requires a certain number of members of both houses present to pass bills, so if Republicans leave, the legislature can’t do anything.


SB 1536, a wildfire mitigation bill, was also casualty of the walkouts this winter. It was crafted from the conclusions of the Governor’s Council on Wildfire Response, which met for a year to work on it, and included Bend Mayor Sally Russell.


The bill would have would have cleared trees and reduced fuel load on 300,000 of acres of Oregon a year. This strategy is similar to the work of the Deschutes Collaborative Forest Project, a federally funded organization which has been working to thin and clear the forests around Bend since 2009 to reduce the risk of wildfire in the area.


The "short session’s” wildfire bill would have required utilities to create their own mitigation plans: Downed powerlines were responsible for many of the recent fires near the McKenzie River and farther north in the Detroit area. It would have also funded programs to help communities prepare and survive coming fires. The Council estimated these projects would cost about $200 million a year for the next 20 years. Republicans expressed concern over the ambitions and cost, but the bill made it out of committee and likely would have passed in both houses if Republicans were present for the vote.


“Obviously it’s very disappointing that the session wound down without that going through,” Matt Donegan told Oregon Public Broadcasting after the session was cut short by the walkouts in March. He chaired the Council and works in the sustainable forestry industry.


“I think the nightmare scenario is going to be if we have a horrible fire season,” he said. “If the recommendations we made could have been helpful in preventing some kind of tragedy—and because of the walkout the recommendations weren’t followed. I don’t think anyone wants to see that.”


With the 1 million acres burned in Oregon, and most of the fires less than 5% (or less) contained as of press time, it appears that Donegan’s “nightmare scenario” has played out.