The Quick and the Dead | Film | Bend | The Source Weekly - Bend, Oregon

The Quick and the Dead

"Windows" is an old-fashioned pot boiler 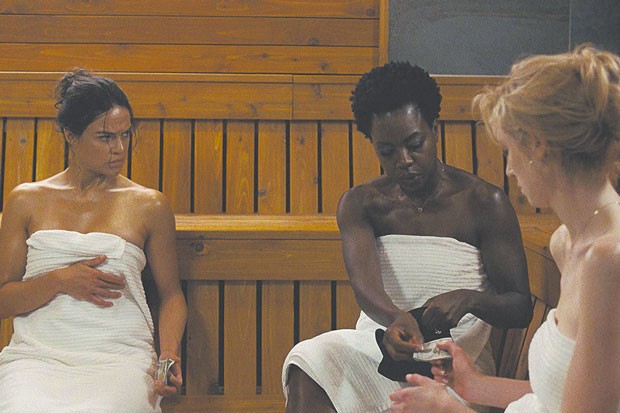 "Widows" is a film about reflections—not just about how we're seen by those around us, but how women are viewed by men, how women view themselves and the way we look at our husbands and wives, desperate to know that what we're seeing is the truth.

British director Steve McQueen finds dozens of ways to shoot the actors reflected in windshields, windows and mirrors, leaving the audience always searching for the right angle to see beyond the surface of these complicated women.

Liam Neeson plays Harry Rawlings, a master thief killed alongside three of his accomplices during a robbery, burned alive along with $2 million in cash. The money belongs to crime kingpin Jamal Manning (Brian Tyree Henry), who needs the money to finance his run for alderman against Jack Mulligan (Colin Farrell), son of incumbent political shark Tom Mulligan (Robert Duvall).

Jamal wants his money back and the only one he thinks can repay him is Harry's wife, Veronica (the always astonishing Viola Davis). Veronica finds plans for Harry's next heist and teams up with two other widows to do one last score so they don't end up with Jamal's psychotic brother Jatemme (Daniel Kaluuya) brutally murdering them.

Watching Chicago politics collide with gun fights and breathless heists gives "Widows" a beautiful tone throughout its running time. Every single character (especially the central quartet of Davis, Elizabeth Debicki, Michelle Rodriguez and Cynthia Erivo) are given ample opportunities to breathe and live. When the bullets start flying, we're invested in the good guys and the bad guys and the women who make them strong.

Written by "Gone Girl" scribe Gillian Flynn as well as McQueen, the script for "Widows" has a couple twists too many, giving the film a much pulpier vibe than McQueen and cinematographer Sean Bobbitt seem like they were going for. The film is fun and breezy in moments, but the story is taken very seriously by the actors, and sometimes it becomes a little "Alfred Hitchcock Presents" with all its twisty/turny shenanigans.

Still, imperfect as it may be, "Widows" is a damn-near classic with unlimited replay value. There's something new to look for in every frame, whether it's Davis letting loose some vulnerability through her strength or "Get Out's" Daniel Kaluuya scaring someone half to death with a look in his eyes.

"Widows" lives and dies by its reflections—the most important being the way women are reflected in the eyes of bad men. Either as property, pleasure or escape, the men are only capable of seeing what the women wish to reflect back at them. These women have spent their entire lives being undervalued and, especially, underestimated. Once the mirrors are shattered, all that's left is the truth.