The Rise and Fall of the 22-ounce Bottle | Beer & Drink | Bend | The Source Weekly - Bend, Oregon

The Rise and Fall of the 22-ounce Bottle

Spend enough time browsing the beer aisle at the grocery store and it's hard not to notice the shrinking selection of the once-ubiquitous 22-ounce bottle. Called interchangeably a "bomber," "twenty-two" or "deuce," the 22-ounce bottle format helped fuel the expansion of small local brewpubs into statewide and regional breweries. After years of growth in popularity and shelf space, the format appears to be in decline, its demise hastened by the explosive growth of cans.

No one seems to know why 22 ounce became a standard size. My research into the origins of the size found very little besides vague references to the format pre-dating prohibition. 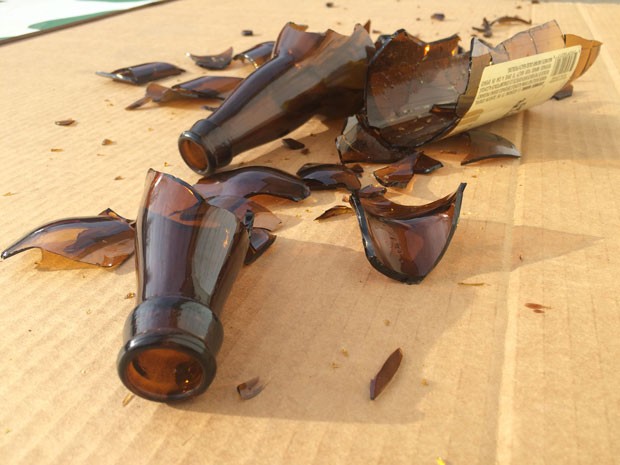 There is no metric equivalent to the bomber. It's an awkward 1.27 pints. Not enough to share, but, with some big beers, too much to tackle alone.  How is it then that the bomber gained such a prominent place in the beer world?

Contrary to common belief, 22-ounce bottles did not always connote specialty or small-batch craft beers, but maintained a status akin to the 40 ouncer. Nearly every party of my early college years was filled with cases of $1 out-the-door "deuces" of Natty Ice or Miller High Life. It wasn't until after the first microbrew bubble burst in the late '90s that breweries began to rethink their branding and packaging as a means to stand out.

Newport's Rogue Ales rode a wide variety of painted bombers to national and international prominence. Bomber bottles and a unique teal color scheme helped grow Ninkasi into one of the state's largest independent brewers. Deschutes launched The Abyss in wax-dipped 22-ounce bottles in 2006, and the format's evolution from low brow to high end was complete.

In 2008, Portland-based Green Bottling's mobile bottling service helped make 22-ounce bottles the standard package for small breweries. Mobile bottling allowed brewpubs without the capital or the space for a packaging line of their own to provide packaged beer to a growing number of retailers with a newfound appetite for craft beer. By 2013, grocery store shelves swelled with bombers from seemingly every brewery in the state. The brewery boom was built in no small part on the backs of $4, 22-ounce bottles of IPA. Then all of a sudden, things shifted.

Budget-conscious beer drinkers began to recognize that 22-ounce bottles may provide a nice profit margin for the brewery, but at a higher cost per ounce to the customer. Brewers continued to expand and shift excess capacity toward six packs at the request of distributors and retailers. Ultimately, the biggest shift was the emergence of a compact canning line that was able to be loaded on a truck. Once only an option for the largest of breweries, compact, small-scale canning lines like the Colorado-built Wild Goose opened up the world of cans to small breweries and started the death spiral for the once-stately 22.

Today a handful of breweries still package 22-ounce bottles, but most have shifted to single-serving 500-ml bottles or the increasingly more common 16- or 12-ounce cans. From mass-produced malt liquor to barrel-aged stouts, the bomber bottle has held it all at one time or another. It's possible the bomber may rise again, but the evidence suggests that the format may be destined for the recycling bin of history, once and for all.