An experience of a lifetime! 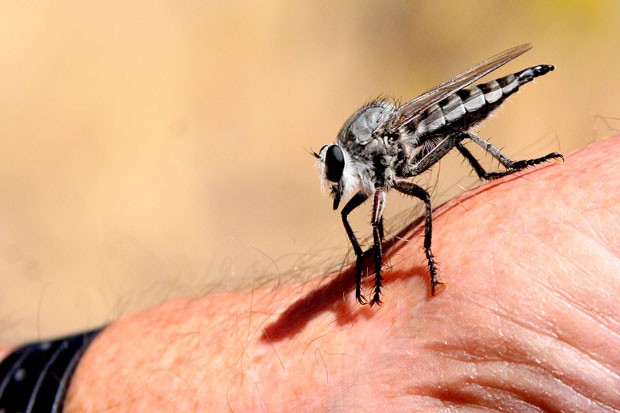 Please forgive me for being redundant, but the magnificent specimen pictured here came right to me and landed on my hand! It just wanted someone to tell its story, and because I love to do it, so here it is...

Last Thursday, as I was leaving Tumalo, I approached the junction of Gerking Market Road and noticed a van and a trailer-full of domestic stuff stopped alongside the road. The trailer was jacked up and a wheel was missing. Two kids and a young couple waited there. Being the father I am, I had to stop to see if they needed help. Turned out a wheel and tire were on the way, and they were about to get on the road to their impending marriage down on the Oregon coast.

Just as I was about to get going, that magnificent robber fly came zipping by, liking the looks of my knuckle and landing thereon. Robber flies are deadly hunters who often perch on a stick, watching for a fat, juicy insect to fly by. Then—with the speed of an F-16 Viper Jet—they swoop down upon the victim, grasp it in its six legs, punch their razor-sharp sucking proboscis into the hapless victim and suck it dry.

So, I suppose my knuckle was a good a perch as any, and I'm sure the robber fly had no idea of how I was going to react to its choice of perches. "Wow! Look at that!" I exclaimed. I had to. This was the largest robber fly and most perfect one I had ever seen.

I was between the two adults, with one of the kids looking the fly right in the face. Those are Golden Moments for me; I can't help myself, I have to share my love and excitement for something as grand a that robber fly was. While mom was getting her phone in focus, I offered the young man in front of me the fly to perch on his finger.


They're also known as assassin flies, because of the fearful way they capture and suck insects dry—and I can testify from personal experiences, they can suck the life out of praying mantids, grasshoppers, beetles and even dragonflies. tweet this

Sure, he was apprehensive, and kept mumbling, "Get it off of me, get it off of me..." but I didn't let him have his way. I just kept telling him about that grand insect, and convinced him that he was having a Special Experience in Life. Really, with all my years of chasing kids at the Oregon Museum of Science and Industry and the science camps, I had never had a Close Encounter of Any Kind like that. Never!

Soon, mom, dad and kids were into robber flies and I was happy as a pig-in-a-poke. But then, not to overdo it, I placed the fly back on my fist, waved good luck to the family, and wandered back to my 4-Runner where my son, Reuben and his son, Truman were waiting.

Yep, you guessed it, Tru was all hot-to-trot when I placed the insect on his hand. When I gave Reuben my camera and asked him to shoot the photo above, he took to it like the pro he is. And now you can enjoy the specimen as much as we did.

My first look at a robber fly was the one I captured in a juice bottle in the mid-'50s, when I was blasting welded tuff overburden off pumice deposits west of Bend for Bill Miller's Central Oregon Pumice outfit.

Right after work I went directly to the library and asked Ivy Grover, the librarian at that time, if she would help me look up the life history of robber flies. In those days one had to go through many, many books until one had enough data to know up from down. Today, all one has to do is Google what you want to know.

Robber flies are a family Asilidae, and in the biological Order, Diptera, the "true flies." ALL true flies have only one set of wings. They're also known as assassin flies, because of the fearful way they capture and suck insects dry—and I can testify from personal experiences, they can suck the life out of praying mantids, grasshoppers, beetles and even dragonflies. There are over 7,000 known species of robber flies.

Growing from egg to adult, robber flies go through what is known as complete metamophorsis, that is, from egg to larva to pupa to adult. I had to look hard to find larvae, but finally did in the ash soil west of Bend.

While old Darrel Stephenson, the head powder monkey, and I were drilling all those 4-inch holes, loading fertilizer in order to blow up and break up that tough welded tuff covering Bill's pumice, we also stopped frequently to look for birds, ants, beetles, reptiles, lizards, salamanders and other moving things we didn't want to blast to Kingdom Come.

(There's a Great Horned Owl nesting very close to William E. Miller Elementary School, adjacent to the old pumice pits, whose great, grandparents I first met in 1954 when I chased them out of the area we were going to blast.)

Anyway, it was during those days that Darrel and I enjoyed our first robber fly larvae feeding on the tiny, just hatched June bug larvae.

Watch for 'em, good people. If you have one land on your hand like I did, perhaps that will be a good omen. I thought it was my reward for stopping to see if the family needed any help.