An obscure piece of Bend culture, explained (kind of)

I'd seen it around town on numerous locations, but I'd never had the guts to hop onboard. Could I hop onboard? WTF was this giant painted contraption, rolling through the streets of downtown Bend, blaring electronica and captained by a mysterious man in a sequined cap?

The Rock Box, of course. Think "The Magic School Bus," but for tipsy adults, and instead of Ms. Frizzle you've got... well, Lance. 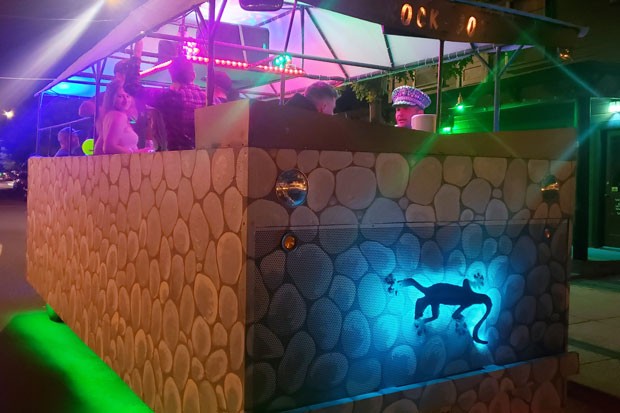 What I worried would happen: When I finally tracked down the man behind the madness and coordinated a spot to board, I wasn't sure what to expect. Would I be tossed around for an hour with a group of drunk 20-somethings? Would I be yelled at by irritated pedestrians? "Turn the music down, ya goons!" Would I instantaneously regret this somewhat impulsive life choice?

What actually happened: I had the time of my life. In a time plagued by division and uncertainty, it was great to forget about the seriousness of everything for a couple of hours and ride around with a happy (and slightly buzzed) group of strangers. For just a while, everyone smiled from ear to ear, fun was the priority and the gravity of our current circumstances seemed to be entirely lifted. The good side of humanity—love and unity—bubbled to the surface. It felt important.

Lance Davis, longtime Bendite and the Rock Box creator, explained the events that led to his repurposing a 1977 Dodge Titan motorhome into what is possibly the most obscure—and delightful—piece of Bend culture.

“This is the first year that I won’t be going to any festivals at all, and honestly, it’s been an emotional rollercoaster. I’ve been bummed about it for sure. But this is totally filling that void for me. It feels like a festival on wheels.” —Jacob Illk tweet this

"I don't drink, and I'm not too crazy about the bar scene," Davis told the Source. "I don't need the drama, you know. The fighting. We only have good times on the bus. It's all about the joy that it brings to other people."

Davis explained how nine years ago, he and three of his buddies headed to Burning Man. "That's really when it all started," he said. "We built something similar to the Rock Box out of a motorhome, and I took it to Burning Man and back for three years in a row. It changed my life. The experience, the people, the fun."

One of the Rock Box passengers, Jacob Illk (also known as "Jacob the Juggler") confirmed that for him, this was the case. "I worked for Dump City Dumplings at festivals for the past five years," he said from beneath his giant, furry wolf hat. "I worked at the county fair for 10 years. This is the first year that I won't be going to any festivals at all, and honestly, it's been an emotional rollercoaster. I've been bummed about it for sure. But this is totally filling that void for me. It feels like a festival on wheels." 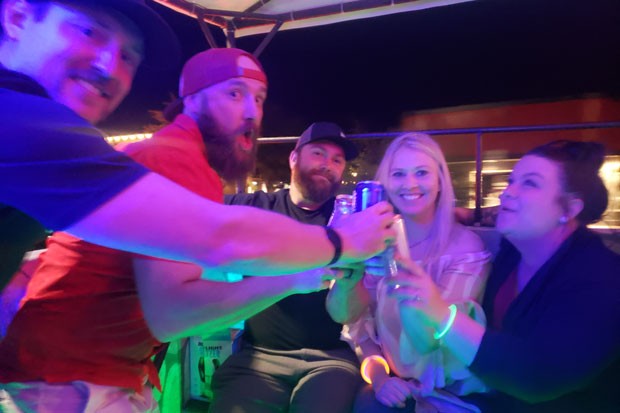 Because the Box is a repurposed RV, drinking onboard is actually legal (hello, loophole). Davis rolls around town stopping by 7-Eleven every once in a while so passengers can replenish supplies. Some stay onboard the entire night; some utilize the Box as a bar-hopping tool. Davis carts around everyone from repeat riders to confused tourists. While he's used to the looks of bewilderment he gets from the droves of downtown bar goers, he's confident that anyone who hops onboard will not regret it.

"Of course, there are the haters," he said. "I had this one guy who was complaining about the loud music, then he took a ride and completely changed his tune. The goal is for people to have fun and stay safe. I used to only want a certain type of person onboard, but I missed out on a lot of colorful characters because of that. I've met some awesome people. I let anyone onboard as long as they're respectful and not contributing to any kind of delinquency."

The Rock Box will be around all summer long, picking up river floaters and providing free ice cream and popsicles to excited kids. "I have kids get on and their eyes light up and they tell me they want to build their own someday. That's so awesome, man. I'm really looking forward to summer. I want to have a good summer, move on from all of this BS. I only have good stuff in my life. I can't bitch about nothin', and if I do it's my own damn fault."