"The Scene is what You Make It" | Sound Stories & Interviews | Bend | The Source Weekly - Bend, Oregon

"The Scene is what You Make It"

One of the main players behind the High Desert Underground Music Fest is the Roof Rabbits' Johnny Bourbon. You can catch this trio of rockers performing on night two of the festival, for what is sure to be a high-octane affair. 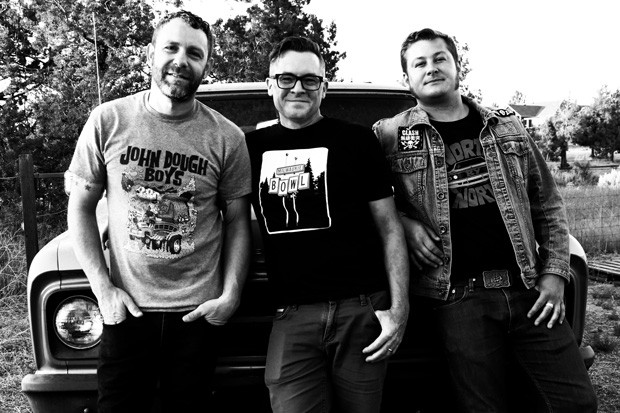 I chatted with Bourbon, guitarist and vocalist, about the band's beginnings and the current state of the scene.

Johnny Bourbon: Sam Fisher and Sean Garvin played in a band called Tuck and Roll for around 10 years. I met them years back and we played some shows together when I was doing Harley Bourbon. Sam eventually joined HB when TnR was more or less defunct. Then we started working on Roof Rabbits with Sean as a side project in early 2016. I had basically written the "Creature Comforts" album and the material didn't fit with HB.

At first, we thought we might just do it just to record the album, but it ended up working too well and so we stuck with it. Meanwhile HB split as our upright player moved to New York to work for the National Hockey League. So, continuing with the Rabbits just felt right. It felt refreshing and fun and we all needed that. We played our first show as a group on Halloween night 2016. We we're at the M&J Tavern dressed up like Spinal Tap and hadn't picked a name yet. Sam was wearing the tightest pants, so we jokingly referred to the band as Sam's Bulge that night.

SW: You may have been asked this before, but is there a story behind the band's name?

JB: The name was more or less random at first. We threw around a few names after Halloween knowing we couldn't continue under our comedic moniker. The Roof Rabbits was one of the only names that was instantly agreed upon. At that moment we didn't have an inkling to the definition, which only confirmed it to be our destiny when we learned what it meant.

During World War I in Europe there were extreme food shortages and it was commonplace for a butcher or restaurant to sell you cat meat and tell you it was rabbit... Cat meat being passed off as rabbit became known as Roof Rabbit, and I've been told that if you order a rabbit dish in some parts of Italy, they still serve it with the foot on so you can be sure it's actually rabbit.

SW: You guys put out your debut album toward the end of December. What was it like to see all the positive feedback from within the community and even from those outside of it?

JB: This album was very personal—I was working through a lot of things about myself, my habits, unhealthy relationship patterns and behaviors, so it was really gratifying to see other people resonate with those words and feelings. There was definitely a cathartic feeling to completing the album, then getting it out there and off of my chest.

SW: Roof Rabbits gets to perform at the first-ever High Desert Underground Music Fest. What does it mean for you all to be a part of something like this?

JB: It's great. There have been ongoing talks for quite some time about cross promotion between local bands for a long time, so coming together to produce a local comp CD that we're going to give away for free is a huge step for our local scene.

SW: What's been your experience with the local scene in Central Oregon?

JB: I've been playing music in this town for 11 years, so have my bandmates—probably longer. The scene has evolved a lot, people come and go, venues come and go, but I feel like there's one constant and it's that the scene is what you make it.

If you're missing something in this scene, you get together with like-minded people and bands and make it happen. Put on the shows you want to see. A lot more people are taking this approach and it seems like it's working—and as a result, venues are becoming more open minded.

SW: Do you have any advice to other musicians in the area who are thinking of starting a band or wanting to play as a solo act?

JB: To the new kids on the block I would say this... Play your ass off and mean it. Be authentic. Be you. If your music is a cliché or a gimmick people will know, and you will never be able to give YOUR best performance as someone you're not. Sing your heart out if there's five people in the room the same as you would if there were 5,000. You're there to show the world who you are—and it doesn't matter if someone doesn't like it, there will always be people who do, and you're playing for them.