The "Shoes" Protest Was About Something Not Happening in Bend. Is It a Frontload to a Bigger Fight? | Editorial | Bend | The Source Weekly - Bend, Oregon

The "Shoes" Protest Was About Something Not Happening in Bend. Is It a Frontload to a Bigger Fight?

The recent protest at the BLPS building could be labeled as simply annoying or embarrassing if it didn't have other issues attached to it.

December 08, 2021
14 comments
Editor's note: Updated with information from the Oregon Health Authority regarding current and proposed rules regarding COVID-19 in schools. See the addition at the bottom of this editorial.

We get it. It's been a long couple of years. We're all getting pretty tired of wearing masks while lifting weights at the gym or wondering when our favorite event gets to take place inside again. We understand that, in a society designed to let the people operate their own functional government, protest and petitioning the government for redress of grievance is an important tool—and one we wholly support. Where we draw the line in that support, however, is when protests are used for things that don't actually require redress—for things that haven't happened, aren't happening now and aren't expected to happen at some point in the near future. It denigrates the process.

Case in point: the "shoes on the steps" demonstration that happened Dec. 1 on the steps of the Bend-La Pine Schools administration building. 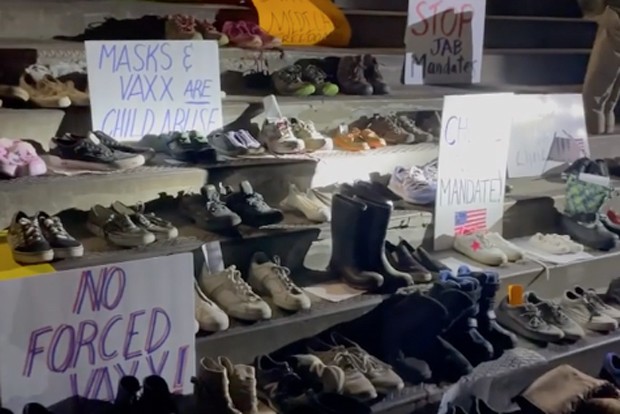 "Each pair of shoes representing a child being pulled from the school system if vaccine mandates are enforced," states a description of the protest on the Facebook page of the Moms for Liberty – Deschutes County Chapter.

And yet, Bend-La Pine Schools has not rolled out a vaccine mandate for students in the district and does not have plans to do so. We asked, just to be sure. Decisions like that are typically the purview of the state, the board's chair told us.

Portland Public Schools, located in a city that has seen far more COVID caution and overall compliance than Central Oregon has, did briefly consider a student vaccine mandate, but already declared it will not enforce one.

The recent protest at the BLPS building could be labeled as simply annoying or embarrassing if it didn't have other issues attached to it. Staging a demonstration in protest of something that has not happened and doesn't appear to be happening anytime soon preys on people's ignorance and riles them up for no good reason.

It's one thing to stand in objection—as is Americans' constitutional right—to things that pose a very real threat of being enforced. It's another to make stuff up. Doing so diminishes the impact of protests that aim to tackle real problems.

So what would be the purpose of such a thing?

Seeing this type of protest crop up in Bend demonstrates something important: That nationally led movements and national talking points continue to insert themselves into local issues—even when the local community doesn't have an issue at all. Moms for Liberty is a national group with various chapters around the U.S., incorporated just this last year by two moms in Florida. It's a group that can be counted among the loud minority that showed up at school board meetings across the country in protest of Critical Race Theory and comprehensive sex education, along with mask and other COVID mandates.


"These well-connected partisans are opportunistically manufacturing outrage and selling it to parents under the guise of empowerment," describes Media Matters, the nonprofit that monitors and corrects conservative misinformation in the U.S. media.

So where is all of this going?

Beyond upsetting those who saw last week's shoes protest as an affront to Jewish people, (the original "shoes protest" along the Danube River in Budapest sought to memorialize the people killed by the fascist Hungarian militia during WWII), the end game of all of this needless protest appears to be a front-load to a larger effort.


"Globalists, utopians, socialists, totalitarians and the UN are using public schools to undermine freedom and Christianity," a slideshow at a Moms for Liberty event in October decried, according to Media Matters. That statement slots nicely with the efforts to undermine and water down public education and to build up the school-choice and charter-school movement, which has been identified as a modern-day move to segregate schools and subsequently, we feel, negatively affect lower-income students.

"It would be unrealistic not to acknowledge that far too many of our public schools are troubled with low performance (due to a variety of factors) that understandably prompt many parents and guardians to seek alternatives," wrote Raymond Pierce, president and CEO of the Southern Education Foundation, in a May article in Forbes. "...The truth is that voucher and tax credit programs structure choices to promote de facto segregation, contravene constitutional considerations, and threaten to dismantle hard-fought and socially beneficial historical progress. They represent a serious setback for universal free public education and the equality and equity goals it promotes."

While it would be easy to disregard these meaningless protests in our community as simply annoying or beneath discussion, it's important to remember that, if not for a broader knowledge of what is happening inside and outside our schools, this misinformation can gain traction and seriously upset people. This unrest can lead to a very real decline in our ability to provide vital services to those in our community who don't possess a national platform.

After hearing from readers concerned that current rule-changes underway at the Oregon Health Authority purportedly included vaccine requirements for students, we reached out to OHA for clarification.

Below is the response from Rudy Owens, communication specialist at OHA:

"OAR 333-019-0010 implements a state law that requires school administrators to exclude staff or students who have been exposed to one of the communicable diseases identified by the Oregon Health Authority, which includes COVID-19, if that staff person or student is susceptible to the disease, for a period of time, unless the local public health officer believes that exclusion is not necessary. A staff person or student who is not vaccinated is considered to be susceptible to COVID-19.

"OAR 333-019-1005 requires child care providers and youth programs to have communicable disease management plans and does not have any vaccination requirements."