The Slipper for the World Cup Champions

U.S. Women's Soccer Team scores victories that highlight a number of issues still in play for women, for LGBTQ+ people and for athletes worldwide

Years ago, the Source used the "Boot" and "Slipper" terminology on its Opinion page, calling out the "bad" and "good" actors who deserved some type of recognition. While we've sunsetted using that format on a regular basis, we reserve the right to bring it back—like when the U.S. wins the FIFA Women's World Cup, for the second time in a row. 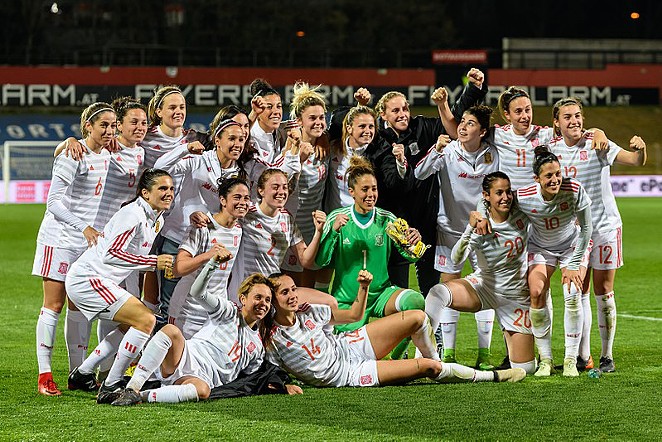 This team earns The Slipper this week, not just for taking home the top honors, but for using their victories to highlight a number of issues still in play for women, for LGBTQ+ people and for athletes worldwide.

Here are just some of the ways the U.S. women's team is advancing dialogue on important topics—and why they're getting the Slipper.

Re-igniting the dialogue about a federal Fair Pay Act

The topic of equal pay has been at the forefront of people's minds this week, having been a battle cry for the U.S. women's soccer team since long before the World Cup. In this recent World Cup, women competed for a prize purse totaling about $30 million. By contrast, the men's World Cup contenders will battle for a prize purse of $440 million. That $30 million was already doubled over what FIFA originally offered women's teams. Inequities like that are why 28 members of the U.S. women's soccer team filed a suit against U.S. Soccer in March, alleging gender discrimination.

Equal pay is a topic the Oregon Legislature tackled several years ago, culminating with the Oregon Equal Pay Act going into effect Jan. 1 of this year. That law prohibits employers from asking job candidates how much they made in their last jobs, for one, and bans employers from paying "wages or other compensation to any employee at a rate greater than that at which the employer pays wages or other compensation to employees of a protected class for work of comparable character."

Statewide laws are good—but even better would be a federal one. Democrats in Congress have been trying to pass a federal Fair Pay Act for years. The current iteration passed the House in March, but has yet to move along in the Senate. As the U.S. team advocates for its own version of equal pay, voters are reminded that this Act is in play, too.

When it comes to gender discrimination, federal legislation can have a big impact. Just look at the effect of Title IX of 1972—which outlawed discrimination, based on sex, in a federally funded program, including school sports.

Title IX saw a dramatic increase in sports participation among girls in the U.S. Still, it hasn't abolished gender discrimination. In the U.S. today, "Schools still don't provide women and girls with equal opportunities to play or equal treatment in areas such as facilities, equipment, travel and publicity," wrote Neena Chaudhry, general counsel and senior advisor of education at the Washington, D.C.-based National Women's Law Center. Ask yourself how that applies here in Central Oregon. In our area, male-dominated sports such as football and baseball still have the most extensive facilities, for one. Think about your own participation in youth sports—how many times have you packed up the family to tailgate at a local high school football game? What about a girls' soccer game?

"Many people say that female athletes can't expect equal pay or treatment because women's teams don't bring in as much money or the market dictates pay," Chaudhry wrote in a blog July 5. "But even in situations where this might be true, those same people don't acknowledge that men have been encouraged to play sports for centuries, whereas women have only been allowed to play sports for decades."

Since its inception in 1930, 79 nations have competed in the men's FIFA World Cup. In the Women's World Cup, 36 nations have competed. The women's competition has been held since only 1991. While the vast majority of people play sports just for fun, a push for equal pay will level the playing field not just for participation, but in encouraging girls to see that sports can be a viable career option for them, too.

A worldwide spotlight on LGBTQ+ rights... racial equality... and more


Not only has U.S. team captain Megan Rapinoe been outspoken about equal pay, she and her teammates have also championed equality elsewhere. Rapinoe was among the first athletes to kneel in solidarity with NFL player Colin Kaepernick, who advocates for ending systemic racism against African Americans. Rapinoe has also refused to visit the decidedly anti-trans Trump White House if invited, and she's been vocal in opposition to the anti-trans policies prevalent in international sports.

With all this in mind, maybe it's time we swap the Slipper for a soccer cleat.