The Slow and the Curious | Film | Bend | The Source Weekly - Bend, Oregon

The Slow and the Curious

I didn't expect this movie to be smart, but I'm not sure I expected it to be so stupid, either. As an unabashed fan of the "Fast and the Furious" franchise, I've been looking forward to "Hobbs & Shaw" all year. Dwayne Johnson's Luke Hobbs has been the best character in the series since his introduction in "Fast Five," so it makes sense the producers would pull him off the flagship and give him his own franchise. It also doesn't hurt that he's far and away the biggest movie star in the series. 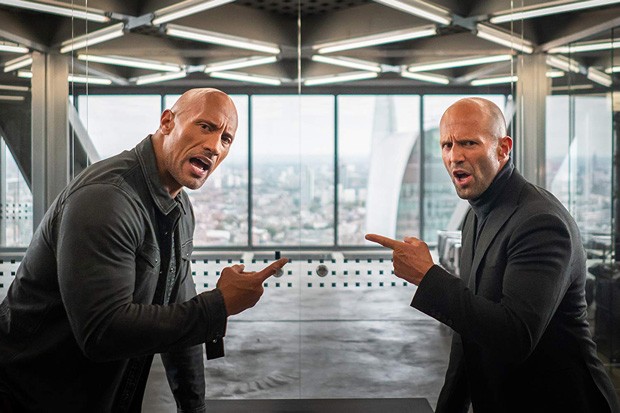 Teaming Hobbs with Jason Statham's Deckard Shaw (the villain in "Furious 7" and sort of hero in "The Fate of the Furious") makes sense. The characters hate each other and have fought each other repeatedly throughout the series, adding a bit of an "Odd Couple" vibe to the movies.

The problem with that is now "Hobbs & Shaw" is basically two and a half hours of the characters bitching at each other which, even with Johnson and Statham's grounded chemistry, gets awfully dull and repetitive after a while.

They hook up with Shaw's sister (Vanessa Kirby, who steals the whole movie) to take on Brixton Lore (the wonderful Idris Elba), a rogue MI6 agent who is part cyborg, part super villain and all sass. Lore has a virus called Snowflake that makes you...ohmygod who cares! Do things blow up good? Yes, they do! Does the Rock punch things? All the things! Does Statham kick things? So many things!

That's all you need to know. The film is fast paced and ridiculously entertaining even as it doesn't quite reach the highs of the other franchise ("Five," "Six" and "Seven") it doesn't come near the lows, either (I'm looking at you, "2 Fast 2 Furious"). And while Vin Diesel and company aren't really drowning in an excess of intelligence, "Hobbs & Shaw" makes those movies look downright intellectual by comparison.

This movie is pizza. Like, maybe you wanted something gourmet with Greek olives and basil-infused artichoke hearts but instead you got Pizza Hut with fingerprints on it. tweet this

Guess how Hobbs and Shaw figure out how to defeat Brixton? Teamwork. His robot brain doesn't let him move quickly enough when multiple attacks come at him at once. A villain self-described as "Black Superman" is taken out when our heroes decide to throw punches...at the same time. It's "MARTHA!" levels of dumb.

Also, Brixton is working for an unseen villain who, even by the end of the film, remains completely anonymous. I mean, I get that everyone wants this to be another franchise, but at least try to pretend you're telling a complete story. Romance me into coming to a sequel; don't just assume I'm coming so I can see how the first movie turns out.

"Hobbs & Shaw" is big, fun, dumb and the very definition of a "blockbuster." If the dumb stuff bugs you too much and outweighs pretty explosions for you, then avoid this like the plague—but if you just want some stupid excitement and big action sequences then you could do worse. It's pizza. This movie is pizza. Like, maybe you wanted something gourmet with Greek olives and basil-infused artichoke hearts, but instead you got Pizza Hut with fingerprints on it. It's not great, certainly not the best, nowhere near the pizza you wanted—but screw it, it's still pizza and the hunger never goes away.