The Slow Boat to Recovery | The Source Weekly - Bend, Oregon

The Slow Boat to Recovery

On the last weekend of June, the occupancy rate at local hotels and short-term rentals was at 92%. Will tourism keep Bend's economy and city budget afloat?

During the Great Recession, some believed tourism in Bend rescued the local economy. Travelers poured money into Central Oregon's restaurants and coffeeshops, millhouses were transformed into profitable vacation rentals and national sports events attracted first-time visitors. Some visitors decided to relocate to the area, which reinvigorated the real estate market and construction industry.

"As far as tourism's role in our recovery from the Great Recession, it really 'greased the wheels' for the rest of the local economy," Damon Runberg, of the Oregon Employment Department, told the Source. "For nearly a two-year period of time it was the only industry that added jobs while other industries continued to decline slowly or see little change." The surge came as people from nearby cities began to feel more comfortable about their financial situation. They opted to drive over to Bend for a less expensive vacation than flying to Hawaii, for example, Runberg said. 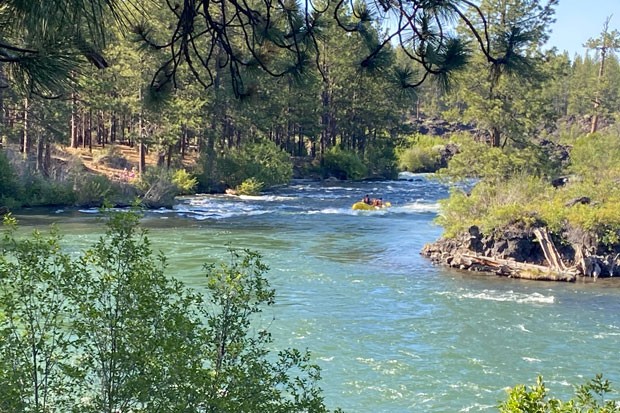 But in the midst of a worldwide pandemic, is tourism the path to economic recovery? Some people fear that carriers of COVID-19 will bring the coronavirus with them and seed an outbreak—which happened in early April in Ketchum, Idaho, the town with the highest infection rate in the country at the time.

Tourism advocates see the industry's potential to lift the city out of economic despair. As long as visitors follow the rules, stay home if they are feeling sick and wear masks, then why not keep the economy running at full capacity, goes the thinking.

Over the past 10 years, Bend has seen a huge increase in tourism taxes that help cover basic services like police and the fire department. Since 2011, revenue from transient room taxes has tripled in Bend, from $3.2 million to $10.2 million last year. Revenues more than doubled for Deschutes County, from $3.1 million in 2011 to $7.8 million last year. The city keeps two-thirds of its room tax collections to pay for services, and pumps the rest into tourism marketing.

More than one out of six workers in Deschutes County has a job in leisure and hospitality. Runberg reported in mid-June that in the previous 12 weeks, 19% of the labor force in Bend filed unemployment claims. The accommodation and food services industries have been hit the hardest, with 40% of claims. Arts, entertainment and recreation jobs are close behind at 30%.

The role of tourism promotion in a pandemic

Visit Bend is at the center of the ongoing debate pitting public health against the economy.

"On one hand we have stakeholders that are eager for us to get back out there and do marketing; on the other hand we have a health crisis upon us," said Kevney Dugan, CEO of Visit Bend.

At the onset of the coronavirus crisis in mid-March, Visit Bend completely eliminated its outbound marketing efforts, and instead encouraged potential visitors to follow Gov. Kate Brown's orders to "Stay Home, Stay Safe." Throughout April and May, occupancy hovered around 25%.

We’ve seen a 290% increase in traffic on our Visit Bend camping page. Hitting the trails and being outdoors is one of the safest places you can be during a pandemic, and we are well suited to capture some of that.—Kevney Dugan, CEO Visit Bend tweet this

Most of the travelers coming to Bend arrived by car from cities within an 8-hour radius, Dugan said. They're driving in from Portland, Washington and Northern California, instead of flying in from Texas or Los Angeles, which is what happens during a normal summer season, Dugan said. VB is only budgeting for future online marketing campaigns so it can turn them on and off at a minute's notice depending on outbreak reports across the U.S.

As of now, it is not doing any marketing, but it's 2020/2021 fiscal year business plan was just approved by the Bend City Council earlier this month with total expenses estimated at $2.3 million, down from $3.2 last year. VB had to dip into its reserve fund, lay off a number of employees and cut salaries, Dugan said.

Still, Dugan believes Bend is poised to have a strong recovery because of all the opportunities for outdoor recreation.

"We've seen a 290% increase in traffic on our Visit Bend camping page," Dugan said. "Hitting the trails and being outdoors is one of the safest places you can be during a pandemic, and we are well suited to capture some of that." 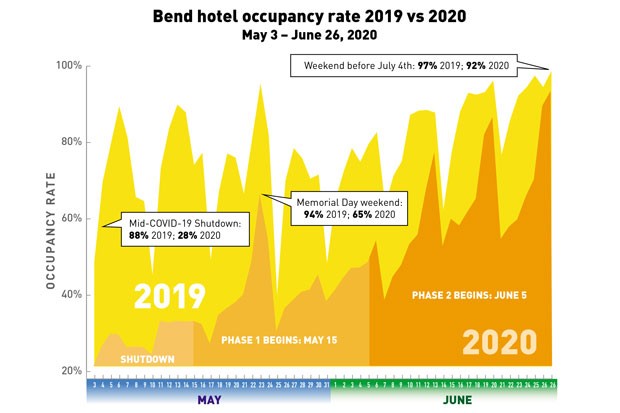 Impacts on the City of Bend

During the fiscal year 2018-2019, transient room taxes provided nearly $7 million to the City of Bend's general fund. Those revenues resulted in $245,000 going to arts and culture organizations, and provided an additional $400,000 to the Bend fire and police departments.

While it is impossible to chart an accurate forecast of what lies ahead in the tourism economy, Dugan worked with the City to come up with an estimate of what both Visit Bend and the City can expect in losses, using estimates from Oxford economics, a global forecasting company.

As of June, the City is counting on a $5.4-million- to $11.4-million shortfall from room tax revenues for fiscal years 2019/2021. The City may also lose a few million from property taxes, fines and citations, and highway gas taxes as a result of the coronavirus lockdowns. The City had planned to spend $219 million in 2020/2021, but every department was asked to make 10% cuts, according to Sharon Wojda, the City's chief financial officer. The Bend City Council finalized the budget reductions on June 17.

The cuts will primarily come from a hiring freeze: Bend currently has 36 jobs openings it won't be filling. This includes about 10 jobs within the fire and police departments.

Because city employees will continue to work from home in the foreseeable future, the City of Bend is cutting $500,000 that it budgeted for expanding its downtown offices. It also eliminated conferences and training.

The City will delay a few traffic-flow projects for at least a year, including a new roundabout at Ninth Street and Wilson Avenue. The City will also delay a project at the intersection of Purcell Boulevard and Neff Road that would have added extra lanes.

Wojda told the City Council that she is assuming the City will be reimbursed by the federal government and the state for all the of its expenses related to COVID-19, and it is actively pursuing grants in the meantime.

The U.S. Congress left on a two-week recess beginning July 2 to celebrate Independence Day. The U.S. House of Representatives passed the Health and Economic Recovery Omnibus Emergency Solutions (HEROES) Act over six weeks ago that would provide $900 billion to cities and states. It would also extend the extra $600/week employment benefit through the end of 2020: it currently expires at the end of July. States are left in limbo as they attempt to budget for public schools, new Medicaid claims and the costs of higher education. The U.S. Senate will return July 20 but it is scheduled to leave again Aug. 10.