"Army of the Dead" mixes zombies and guns

I keep thinking I'll eventually get sick of zombie movies, but it just never happens. Don't get me wrong: I'm fully aware that most of them are terrible, but even the worst zombie movie usually has a moment or two worth watching. The truly memorable zombie movies really only need to nail a couple of elements in order to be considered classics: At least one great horror set piece, some pretty good violence and something the film is trying to say about modern society.

Zack Snyder's new zombie opus, "Army of the Dead," covers all of those bases while also being filled with memorable characters and a few original ideas. Snyder is having a pretty good year with this movie, along with his version of "Justice League" finally being released, but for those who have issues with his directorial style, non-stop use of flashbacks or shallow plot lines, then "Army of the Dead" isn't going to convert any new fans. 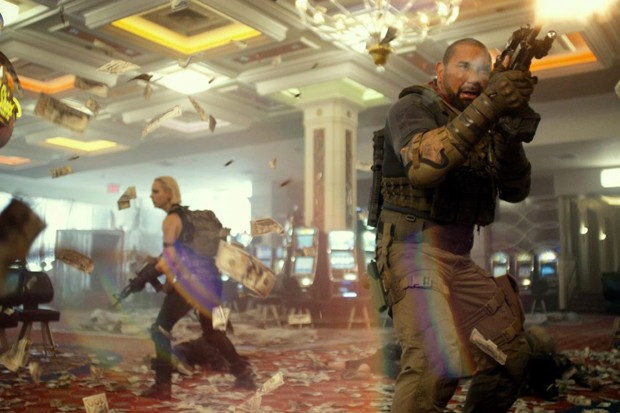 The film follows Dave Bautista as Scott Ward, a former mercenary hired by a ruthless billionaire to take a team into the walled-off city of Las Vegas to rob $200 million from a casino vault. The catch is that Vegas is now filled with zombies—some of them slow and dumb like "Night of the Living Dead" and the original "Dawn of the Dead," and some fast and super intelligent like "28 Days Later" and Snyder's own 2004 remake of "Dawn of the Dead."

So basically, what we have here is a heist movie along the lines of "Ocean's Eleven," mixed with a Michael Bay-esque military action movie, smashed together with a big-budget, massive-scale horror epic like Brad Pitt's "World War Z." The film dances between the genres well and has great pacing for being 148 minutes long, but it also does feel like the first entry in a new franchise as opposed to something that stands well on its own. It doesn't exactly end on a cliffhanger but leaves a few threads that exist not to create ambiguity, but that so a future filmmaker can come back to the world a few years from now. Since there's already a prequel and an animated series in the works, also expect a sequel someday.

Snyder also acts as his own cinematographer here, with "Army of the Dead" being his first film shot digitally. Some of his lighting and compositions are gorgeous, with others being so muddy and blurred out that it looks like he had trouble pulling his own focus (he acted as camera operator, as well). The film bounces back and forth between beautiful and ugly so much that it's hard to tell which it really is.

"Army of the Dead" isn't a great movie, but I can't really call it a terrible one, either. I loved the characters and the gore, and the zombies were disgusting and cool all at once. At the same time, the script was annoying and the cinematography ugly. There's a lot to like about the movie while also being filled with things that are also easy to nitpick. If you're like me and still have an abiding love for the zombie genre, then you've probably already watched it, but if you have zombie burnout, this won't reignite your love for the undead, either. I guess we all have to decide whether to bury the genre, once and for all.

Army of the Dead
Dir. Zack Snyder
Grade: B-
Now Streaming on Netflix