The Sound of Home Comfort

Best known for its strings and on-point harmonizing, the Virginia-based band The Steel Wheels released "Over the Trees," its seventh full-length album back in July. The release marks its first album as a five-piece, with the addition of percussionist Kevin Garcia, who had been touring with the band over the last couple years. 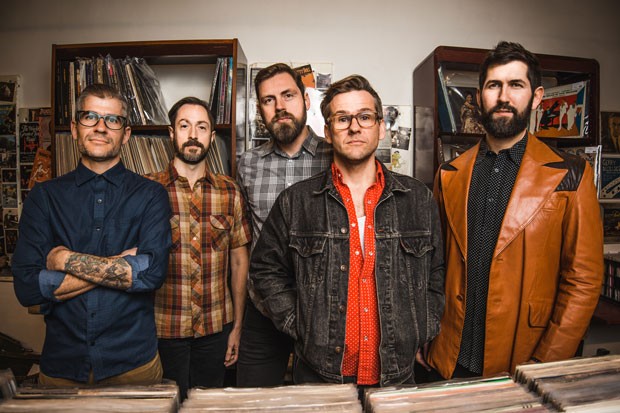 We called up Trent Wagler (vocals/guitar/banjo), who was just finishing a brisk Virginia-morning walk with his two dogs, to get a lowdown on the album.

Source Weekly: You guys put out your seventh album this year with "Over The Trees." As a group that has been making music for quite some time, where did you try to push yourselves creatively on that project?

Trent Wagler: I think, every other album we've done, drums have been an afterthought or more in support of what we're doing—which was normally in the string-band realm. This time it was really fun from the very beginning to have a drummer and just consider that being an integral part of the sound. It wasn't as much like, 'well, do we have drums?' as it was, 'what does percussion do on this particular song?'

Because of that we were able to explore different textures—and it also opened us up to consider, like in the same way we might say there are no drums on this song, we also said that to each other. Like maybe there's no fiddle on this song, or maybe the keyboard takes the bassline. We just opened up the palette. We tried to ask, 'what does the song require?' rather than 'look at what I can do on this instrument!'

SW: One thing that immediately stood out to me was opening the album with "Rains Come." Not only is it almost five minutes long, but it's speaking out about climate change. Did guys always know this would be the one to kick off the album?

TW: No, there was a lot of debate actually [laughs]. Overall, Sam as a producer on this record—he's a super easy going, great producer from top to bottom. Great musician. Really good at taking multiple people's ideas and digesting them. When it came to the album order he definitely had some strong opinions. I wouldn't even say "Rains Come" was his first choice as an opener. But when we threw out different possible album orders, this was one of them that he was definitely willing to fight for.

What I learned from Sam is that it's OK to not follow a specific formula. Because you're right—it's a five-minute song. And to open a record with a five-minute song, especially right now when people's attention spans are short as ever, that was the concern. But it set the tone. It says, 'this is not like your past Steel Wheels' records.'

SW: And then on the flipside of that, you close the album with "This Year," which is centered around having and giving others peace. Why is it important to you to put that type of positivity into a record?

TW: For me, that song, I was not convinced that song should be on any record at first. Someone told me, 'you should write a holiday song,' so that's where it started from. What finally hit me a little bit, at least in my group of friends or people I'm around a lot, was this sense of being positive, being hopeful and having that as a mindset or mantra throughout your day—right now especially, can feel very naive or almost passé. That whole idea of 'if you're not angry you're not paying attention.'

I was fascinated by laying that out there and seeing what people would do with it. It's a little bit tongue in cheek, you know what I mean? It goes into these verses like, 'all your marriages are healthy, all your children are strong.' It's still sort of with a wink that you're saying that.

SW: You guys recorded the album in Maine. What was that experience like?

TW: It's great. Because this was our second record we've done with Sam up there, we really knew the whole vibe this time. We knew where our bedrooms were. It's like an old farmhouse and you sleep there and we make all the meals ourselves.

It was almost a year ago now when we recorded it, so it was December, and we got caught in a snowstorm just as we were getting to the studio. We have a big long van and trailer we were bringing up there for the week and we got stuck on a hill like 3 miles from the studio. We were sliding backwards, and the trailer was kind of jackknifing across the other lane of traffic. It was a disaster. We got rescued by this local farmer who said his daughter saw someone stuck on the hill. He showed up with a tractor and a chain and pulled us up the hill. It was such a cool setup to the week. Then we holed up for 10 days.

SW: I'm a pretty big believer in that where you listen to music can change the whole experience. Do you think that's the same for recording?

SW: Where would you tell people to listen to "Over The Trees" for the best experience?

TW: Oh, man. Well, I'm sitting in front of our woodstove right now and I've got a record player that puts music around the house. It's funny—it's kind of like what we're talking about. Some of the most controlled environments, while they may be finely tuned to offer theoretically what you're supposed to experience, I think that some of the reason vinyl has come back is the imperfections. I think about that with the wood stove because it doesn't heat your house perfectly. But you see the fire and you feel it. I think that the right place to listen to this record is whatever feels like home to you.