The Spirit of Collaboration

Many food & drink products are made in Central Oregon. Now, there's an organization to help them thrive

From hot sauce to dehydrated adventure meals to coffee fruit tea to toffee candy to organic nut butters, an array of food products are produced in Central Oregon. Despite the geographic challenge (over two hours to nearest metropolitan area) which contributes to distribution hurdles, among other things, local food product producers seem to agree there's an entrepreneurial spirit in the air.

Case in point: The ongoing collaboration between a new local hot sauce maker and a longtime beer producer. 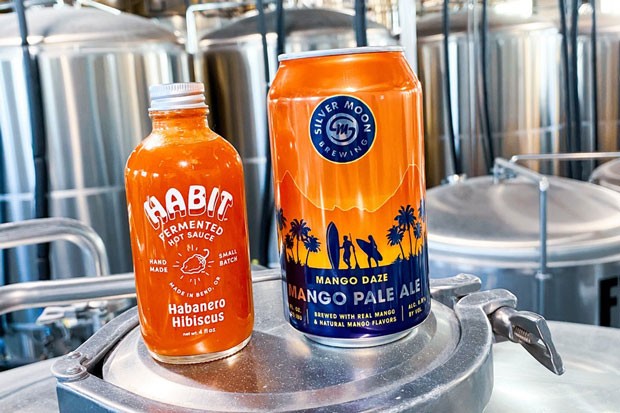 "It took me a while to finally get some of his product in my hot little hands," says Endicott, "but from the first taste, I was very impressed. In a flash, I was sharing it with our Head Brewer, Jeff Haskins, and discussing how it might pair very well with our Mango Daze. Jeff is a huge fan of spices, heat and all things fermented. We did a quick sample right then and there in the taproom, shared it with the brew team, and everyone gave it a thumbs up."

Endicott says immediate plans include blending Silver Moon's Mango Daze Pale Ale with Habit's Habanero Hibiscus hot sauce for Habanero Mango Pale Ale. If the pairing proves popular in the taproom, a long-term goal would be a larger, dedicated batch brewed and fermented with Habit Hot Sauce along with the possibility of a kettle sour.

As Mazama Media CEO/Habit Hot Sauce Founder Bud Torcom puts it, "We look out for each other. For example, fRED Sauce (Fred Giacomini) has given us advice and we would be considered competitors." Torcom says he can't imagine that kind of sharing happening in Chicago, where he's originally from. Both Torcom, along with Riff Cold Brewed Co-founder/CEO Paul Evers, give credit to those who've come before them.

Bend and all of Central Oregon is very supportive of local food producers, restaurants, and the growing food truck culture. This local support allows us to grow and in the case of fRED Sauce, expand.” —Fred Giacomini, Founder fRED Sauce tweet this

Evers says it all started over 30 years ago when Gary Fish founded Deschutes Brewery, "They really were the impetus for creating a craft culture in Central Oregon," Evers said. Torcom also acknowledges Fish and Humm Kombucha Founders Jamie Danek and Michelle Mitchell for their leadership and willingness to share expertise with newcomers.

fRED Sauce's Giacomini says the support isn't just from other producers, but from the entire community. "Bend and all of Central Oregon is very supportive of local food producers, restaurants, and the growing food truck culture. This local support allows us to grow and in the case of fRED SAUCE, expand."

Food for the Sole Co-Founder Julie Mosier echoes Giacomini, stating, "The creative energy in Bend has grown in the last decade and that, coupled with some amazing resources both formal and informal, create an atmosphere that makes it easier to grow."

Riff's Evers is also on the founding board of directors for Cultivate Bend, a nonprofit trade organization focused on enhancing the sector's (food/beverage) ecosystem in Central Oregon. That means sharing wisdom, forging connections, creating resources and ultimately getting locally made products distributed outside of the local market to bring jobs and vitality back to the area. Humm and Hydro Flask have already stepped up as founding members.

Micah Elconin, president of Season to Taste Food and Beverage Business Consulting and director of Eugene's Table, has been contracted by Cultivate Bend to structure the organization. Evers calls Elconin a force within the food and beverage industry in Oregon but assures that, "We're not cutting and pasting the program from Eugene; we're adapting the program for our unique collection of companies in Central Oregon, which are more oriented toward early stage development."

Evers adds that the smaller community means a higher level of accountability and connection, again adding to that spirit of cooperation and collaboration. "It really takes a community to have success here at a higher level, more so than in a metro area," Evers said. "The objective of Cultivate Bend is to bring people together and provide really rich programming that is going to help various businesses to become successful."