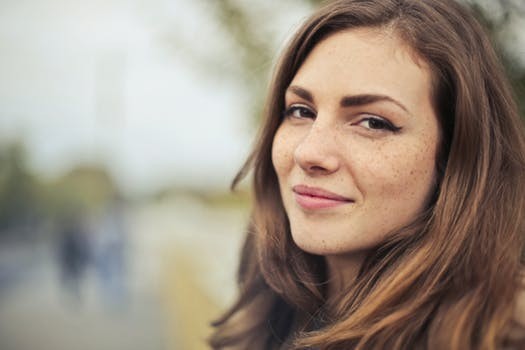 I'm a 28-year-old woman who has been single for over five years. I'm steering clear of dating sites right now because of how so many guys portray themselves in ways that are very different from how they are in person. But then, in day-to-day life, when I smile at a guy I like, he'll usually smile back but he still won't come over and talk to me. Call me traditional, but I want a guy who has the courage to approach me. Guys are meant to do the pursuing.

"Guys are meant to do the pursuing." Well, okay, but forgive the poor dears if they'd like some sign from you about what's likely to be in store for them if they hit on you—a hot time in bed or years of painful skin grafts from a 300-degree pumpkin latte you throw in their face.

Oh, right—you say you smile at the guys you like. Consider that from a guy's perspective: Maybe you were (were needs to be italics) smiling at him—or maybe at some CrossFit Adonis standing right behind him.

A single ambiguous signal isn't a reliable message—that is, a reliably actionable message—especially when there's risk involved in taking action. (In hitting on you, there's the possibility of public humiliation— maybe even of the "Whoa, the YouTube video is going viral!" kind.) It also doesn't help that a smile requires very little investment from you—in effort or risk.

Amotz Zahavi, an Israeli zoologist who studies signaling—behavioral communication between individuals or critters—points out that signals that are more "costly" to the sender are read as more trustworthy (and usually are). Your talking to a guy would be an example of a stronger indication of interest from you (than a mere smile)—particularly if you initiate the conversation.

You send an even stronger message that you're interested by giving several signals at once. For example, you could touch a guy's arm while you're talking and make and hold eye contact (though just for a few seconds, not as if you're a serial killer trying to hypnotize him into climbing into your trunk).

You should also consider that men, more than ever, want to err on the side of seeing that their advances are wanted—which is to say they're all terrified that they'll wake up one day and find their name tweeted with #MeToo. This surely affects their willingness to even ask women out.

I have written previously about how overt pursuit by a woman—direct, explicit expressions of interest, like asking a guy out—is a risky strategy, as it tends to lead men to subconsciously devalue her. (If she's chasing them instead of snubbing them like so many other women do, she must be desperate and/or have her sanity up on blocks in the front yard.)

However, it turns out that you can probably go really, really big in being flirtatious—like way over what you're seriously sure is the top. This comes out of the fascinating psychological effect of "indirect speech"—speech that implies what the speaker means rather than explicitly stating it.

The indirectness allows us an essential "out," according to psychologist and linguist Steven Pinker. Basically, as long as we can't be 100 percent certain of what a person really means—as long as there's even 1 percent of uncertainty—there's "plausible deniability." This allows us to just ignore something that would have been offensive if it had been said in a flat-out way.

So, for example, if something is said euphemistically—a la the ol' "Wanna come up and see my etchings?"—both parties can act as if it didn't mean what it pretty obviously does mean: something along the lines of "It's getting a little loud in here in Cafe Pretentious. Wanna go somewhere quiet and have sex?"

However—realistically—flirting big, on its own, may not be enough. There are men who will realize — after you walk out of the drugstore or cafe and out of their lives forever—that they should have asked you out. Put them in a position to have a second chance by going to the same place over and over—like by showing up at the same coffeehouse every Saturday.

In doing this, you'll also get the benefit of observing men in a naturalistic habitat, allowing you to see potentially disturbing things about them that aren't evident online. This can end up being a lifesaving measure—perhaps literally (in rare cases) and at least figuratively, when you discover that five minutes talking with a guy flies right by...like seven hours spent gagged and zip-tied to a chair.