The Stars Have Beckoned Us: Part Four of "Walking the High Desert" | Culture Features | Bend | The Source Weekly - Bend, Oregon

The Stars Have Beckoned Us: Part Four of "Walking the High Desert"

Musings on the stars of the High Desert, from Ellen Waterston's new book

In the last edition of our excerpts from Ellen Waterston's "Walking the High Desert: Encounters with Rural America Along the Oregon Desert Trail," the author began to describe one wonder of the High Desert Trail: Pine Mountain Observatory. She continues musing on the stars in Part 4, our final installment of the book.

But how about when we can no longer see the glowing mantle of stars overhead? When there is no backdrop for the heavens’ excesses and infinities? We’d be doomed to a world dominated by artificial light, metaphor intended. The world as bright as Times Square. Endless illuminated reflections of ourselves projected back at us, underscoring our lack of self-reflection. Our imaginations would be stunted thanks to our obscured view of and relationship with the Milky Way, the inspiration for speculation, exploration, and limit- less dimension, and our home, after all. The stars—including our sun that teeters on the edge of this spiral fanfare of clusters, chains, and ribbons—that also call this galaxy home, have beckoned us, con- founded us, mapped our passage since time began. We’d be lost with- out them. According to a common medieval legend, when walking the Camino de Santiago pilgrims believed that the Milky Way, always overhead as they made their east-to-west journey across Spain, was created by dust kicked up by their feet. Perhaps hikers on the ODT will adopt this belief, will kick up a new Milky Way or, at least, commit to protecting the one we have. 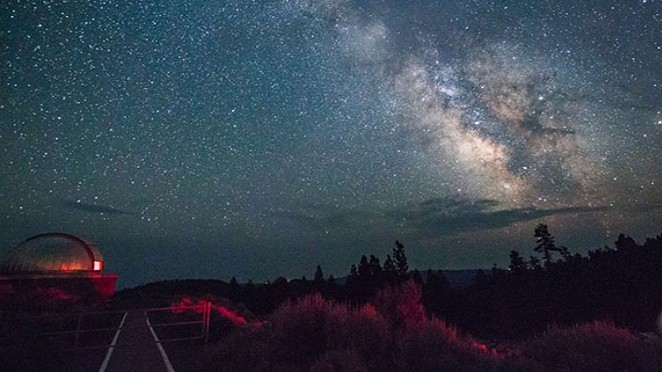 Whether humans are a passing fancy or destined for a longer stay on the planet, you can’t say we lack for ingenuity and, when applied to the good of all, the ability to inspire. Take Roger Worthington, who jumped on Bend’s brewery bandwagon in 2013 (now over twenty craft breweries are in the town and at least thirty in central Oregon) and then went one big step further. Offsetting (or complementing) his entrepreneurial ambitions, he mixed into his craft brews his philosophies and hopes for the planet, literally. Adjacent to Worthington’s nearly thirty-four-thousand-square-foot brewery is an organic hops garden where Oregon State University students can practice the craft brew trade. Not only does Worthy Brewing offer a series of lectures put on by the Oregon Natural Desert Association, but he built an observatory—make that an Hopservatory—for the public on the top of his building.

Since 2014 the administration of the Hopservatory has been in the capable hands of an avid amateur astronomer, Grant Tandy. He runs solar viewing and nightly viewing programs, greets school groups, and collaborates with other regional observatories to encourage awareness and curiosity about the galaxy we call home. With Pine Mountain Observatory, Worthy Brewing is one in a trifecta of observatories in central Oregon, the third being Sunriver’s Oregon Observatory, which impressively claims the largest collection of telescopes for public viewing in the United States.

A quote from Worthington inscribed on the wall of his brewery articulates his invitation to pay attention to the here, right now. “What do you see when you look up at the night sky?” he asks, then answers, “I see two things. Like a Van Gogh on the wall of a museum, I see beautiful art, strange and humbling and constantly changing. I also see a reference point. Space travel is an understandable ambition. But to these eyes everything is too far away, too hot, too cold, too toxic, or too lifeless. The cosmos is a refreshing reminder of how lucky we are to live on such a unique planet. Truly, there’s no place like home. Let’s leave it better than we found it.” I think Worthington is on to something. Perhaps the notion of cultural and educational offsets could be added to the mix of carbon offset options offered to companies around the world. If the chorus of “I love you, man! I love you, bro!” heard at breweries after a pint or two could be replaced with “I love you, planet! I love you, Milky Way!” we’d be on to something. In addition to this clutch of education-oriented observatories in the high desert, there is an exciting national movement to combat light pollution, a celestial Nature Conservancy, a galactic ONDA if you will. It’s the International Dark Sky Association. All around the world, dark sky communities are organizing; sky parks and reserves are being designated as sanctuaries for dark sky protection. Oregon astronomer Bill Kowalik is behind the central Oregon effort, “Several of us are involved in quantitative measurement of the skyglow in central Oregon, to provide a baseline of the current situation. We plan to periodically re-measure the skyglow to assess changes. We are in the process of bootstrapping an Oregon-wide chapter of the Inter- national Dark Sky Association. The Oregon chapter will work to stave off light pollution and bring back the starry skies.” In Bend, it’s Lights Out, Bend, with volunteers lobbying for fewer and less bright lights in town.

Oregon is home to one of the largest and highest quality dark sky zones and statewide has some of the darkest skies in the United States. According to astronomer Kirina Riggins, the last and most southeastern section of the Oregon Desert Trail, through the Owyhee Canyonlands, is one of darkest areas in the country. Kowalik and his associates are concerned that this celestial treasure is at risk from encroaching light pollution. “Oregonians working together can reverse the light pollution trend and preserve our dark sky heritage,” he says. It is striking, looking at the overall map of the ODT, how perfectly the trail mirrors the areas of Oregon’s high desert skies that the International Dark Sky Association proposes for protection. Indeed, the Milky Way is the trekker’s shroud each night on the Oregon Desert Trail, its gauzy haze seemingly something you can touch, a fairy dust you can inhale, a gossamer hammock that rocks our earthbound world with incomprehensible concepts of time and space.

The dark sky movement joins other movements with similarly urgent and poignant goals, such as identifying and protecting locations where one can stand for fifteen minutes and not hear a man- made sound, which is becoming harder and harder to find. We’re more familiar with other initiatives—returning fisheries and coral reefs to health and ridding the oceans of plastics, where instead of a musky tangle of kelp, a line of discarded plastics records the high mark of the most recent record-breaking moon tide. But we are drawing conservation and preservation lines in the sand of Oregon’s high desert and, too, in sound waves, sky, and water.

Nature has been tapping on our shoulders politely, asking tocut in on our self-absorbed dance. The tapping is turning into a pounding as we, oblivious, continue to move across the dance floor, unheeding. Seriously, what will it take? tweet this

Pine Mountain Observatory’s telescopes bring stargazers up close and personal with a light show of amazing proportions: meteor showers, nebulae, the late-arriving news of star births and deaths, and eclipse events. Central Oregon was along the path of totality during the 2017 eclipse. What a high desert sight it was—the eclipse itself, of course, but equally impressive the chill in the air during the eclipse, the silence of the birds, the chastening realization as to how quickly we’d be toast without the sun. No one was unaffected. Hundreds of social media posts told the story. Here are two:

“You get an overwhelming sense of humbleness and how small and petty we really are compared to the mechanics of the solar system, the clockwork of the universe. These events that are taking place, that in no way can we affect or stop. It gives us a sense of how tiny we are and yet how we’re connected to the whole system. All this happens all at once.”—Fred Espenak

“I saw the total eclipse and I realized that I was living in a much deeper, much more dynamic universe than I had previously considered.”—David Makepeace

Nature has been tapping on our shoulders politely, asking to cut in on our self-absorbed dance. The tapping is turning into a pounding as we, oblivious, continue to move across the dance floor, unheeding. Seriously, what will it take? The eclipse brought us to our knees in a shared, though fleeting, recognition of how big and extra- ordinary nature is, that it rules. How about being as moved by our daily, small-scale experiences—dawn, sunset, thunderstorms, baby scrub jays fledging noisily in the front yard?

The more mundane but noteworthy headline associated with the 2017 eclipse was the inability of the central Oregon region to accommodate the hoards who came despite months of inter-governmental planning involving law enforcement agencies, BLM, Forest Service, municipalities, and counties. Hundreds of thousands descended on the high desert to witness the eclipse. Highways were in gridlock for miles and hours as swarms of people, seventy thousand in one high desert meadow, congregated on BLM or Forest Service areas putting extraordinary pressure on the land as well as public and commercial services.

The hordes that overwhelmed the region that day felt like a foreboding, a prophesy of what central Oregon, growing in popularity, will be up against as more and more seek out its rugged beauty. Are we trying to prevent people from coming? Or encouraging them but telling them what to do and when and where? And according to whom?

More on Walking the High Desert, available from the University of Washington press: