The State of Beer in Beer Town, USA

A Q&A with two local brewers

For our annual Beer Issue, the Source sat down with two of Bend's OG brewers to chat about the state of beer in Bend, what they imbibe and just general beery-ness.

Mark Henion is the brewmaster at Boneyard Beer, and Bobby Jackson is innovation head brewer at 10 Barrel Brewing.

Source Weekly: Where did you get your start in the industry?

Bobby Jackson: I started home brewing when I was in college at the University of Vermont. My buddy Conner and I were like, you can buy those kits for like $45, and so we ended up getting one. Right after we got it, we started [brewing] a whole lot, and I was finishing up my degree at school and didn't know what I was going to do. There was a brewing school just south of Burlington, Vermont, the American Brewers Guild, so I applied to that. I went to that right after I finished school. And I had been working at a vineyard and going to the brewing school, and then I had an apprenticeship that I did at Otter Creek in Middlebury, Vermont, and then really just went from there. I got a job offer in Salt Lake City when I was finishing up my apprenticeship, so I did that and moved to Salt Lake, brewing lagers at Bohemian Brewery. I was there for five years.

Mark Henion: I started brewing at Deschutes Brewery in July 1994. I started out keg washing there and kind of climbed through the ranks. It was a pretty fast-moving company when I got there, like people would change jobs every few months because they were growing really quick. I started right when their production brewery opened up, so I mainly worked down at the original brewery for a while and then I went over to the production brewery, and then after a few years they sent me to Siebel Brewing School, and then I became head brewer.

SW: How long have you been in the business?

SW: How long have you been in Bend?

BJ: I've been here for seven years. I moved up here to work for 10 Barrel. I had met the brothers [Chris and Jeremy Cox] in like 2009, and we kind of talked for a couple of years and kept in touch and just kind of hanging out and they made me a job offer in 2011 and I came up.

MH: I've been in Bend 26 years. I worked at Deschutes for nine years, then I went to Cascade Lakes for six and went over to the [Willamette] Valley for five years at Ninkasi, and then came back here. Actually, I worked with Tony [Lawrence] at Deschutes, so we've been friends ever since and kinda working back and forth together, and I just knew eventually I'd be coming back here.

SW: What's the state of the beer market in Bend?

MH: I think it's a little in flux right now. It's definitely been a major boon for several years and I think everyone's kind of feeling that it's not really a good time to go out and expand. A lot of people are pulling back from major expansions because it's a little... there's a bit of a bubble and I don't know if it's going to burst, but it kind of feels like there's a lot of pressure. I've heard a lot of different things. The craft brew movement—people are kind of going more local, more small. The little guys and stuff, so it's kind of putting strain on the bugger guys. And then I've also heard just recently the new generations that's coming up, they're just tired of seeing their parents drinking craft brew all the time, so they're just not drinking it as much. It went from like, macro brew drinking, to the craft beer movement, to the rebels back to macro brew—the whole PBR deal—back to craft beer. I think craft beer is a big thing, it's a big deal, and I think it will continue to grow. It's just where do those [new beer drinkers come from]. Are we pulling from the macro brew? It will be interesting to see. It's definitely in flux, but I think everyone's going to be all right. It's like in the 90s, when we had a bubble burst, but back then it was a lot of people making really bad beer. So it was pretty easy to, you know—the people making quality product and were in it for the beer instead of the money all survived and did well—and the people who were just trying to, let's get in here and make a buck, they just kind of went away. And I think now, there's a lot of people making really good beer, so it's a different scenario.

BJ: Currently, I feel like it's tumultuous and there's a lot of stuff going on outside of the beer [industry] itself. Obviously, trends will always be trends. I feel like it's a whole lot—not to make assumptions or anything—but I think it's kind of like the same ebb and flow that we saw 10 years ago, where there were a lot of people making beer and at the end of it, the consumers are driving what they want and what they think is good. I mean, there are more breweries now than there ever has been, by a lot. I think it's good, you know, production is up across the country, the craft thing is as strong as ever.

SW: How has the beer market changed?

BJ: I feel like there's definitely been an awesome focus on quality, and even since I started working here. Being able to find what works for you and making sure you can repeat that. And, taking steps to repeat that. I think something you might see with craft beer is variability. But we definitely have had a much stronger shift into the quality of our beers, not only flavor and aroma and the actual physical properties of it, but maintaining a quality, safe, long shelf life. Really, just making sure we're just putting out quality products all the time. Our lab has grown from nonexistent to four people down there as well as like two other people managing and overseeing it all and alongside with the safety program that was nonexistent before. 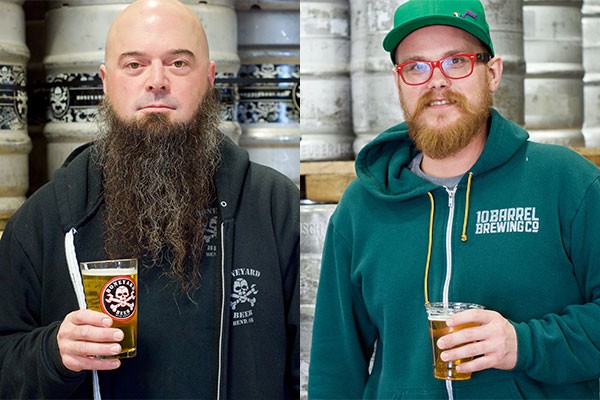 MH: It's shifted, kind of like the main product. When I got into it, it seemed like dark beer was a big deal: stouts, heavy porters and stuff. And then it kind of went into the pale ale realm and now IPA is a big crazy deal and has been for several years. I like to think more refined beers like pilsners are kind of starting to show their face a little bit. I've always been a fan, that's my favorite style. I think they really show the art of brewing; any defects are going to stand out heavily in a pilsner, where in a big stout or a big IPA, they've got hops and malts to cover up [mistakes].

SW: Do you think we're in a post-Beer Town, USA?

BJ: I don't think so, I mean Bend is one of those places that like, yes, beer is a draw, but there are so many other things that draw [people here] that beer goes hand in hand with, that I don't necessarily think it's a post-beer town. Our production is going up every year and has been since I started. Obviously, there are small places in town that are also growing, like Silver Moon has their offsite production now. Three Creeks has their offsite and some of the more mainstay breweries in Bend are growing as well, along with the new breweries opening up and opening pubs. Is the next Beer Town, USA just waiting to happen? You know, who knows, but I think people will still come here for the beer.

SW: What beers do you drink?

BJ: I really like Hamm's, I love Hamm's (Bobby leans back in his chair and laughs). I'm a big fan of [Boneyard] RPM, I think it's a great beer. If I go out and they have it, that's typically what I order. Clay [Storey] and Tony [Lawrence] are awesome. They were some of the first people I met when I moved to town. I actually carpooled up here with a buddy of mine to interview with 10 Barrel and he was interviewing with Boneyard, and Tony ended up taking us out for breakfast before we went back down to Utah. I think they make great beer and they're just solid dudes. I really like Sunriver's Hef, too. I've been buying a lot of that lately. It's just great, it's exactly what I look for in a Hef, and it's quality and super well done. I like when I can get Kettle House Beers from Montana. They have Cold Smoke [Scotch Ale]; great beers. I really like lagers a lot. I brewed lagers exclusively when I was in Salt Lake City. I think they have a spot in my heart. Easy drinking, clean and complex at the same time.

MH: Like I said, pilsner is kind of my favorite style—German style pils—I'm a big fan of that. It kind of depends on the season, I go through the whole realm. I like an IPA as much as the next person. Big stouts—Imperial stouts—for a nightcap or whatever. But I definitely say my go-to is a nice German pils.