The Strongest Flower Yet | The Source Weekly - Bend, Oregon

The Strongest Flower Yet 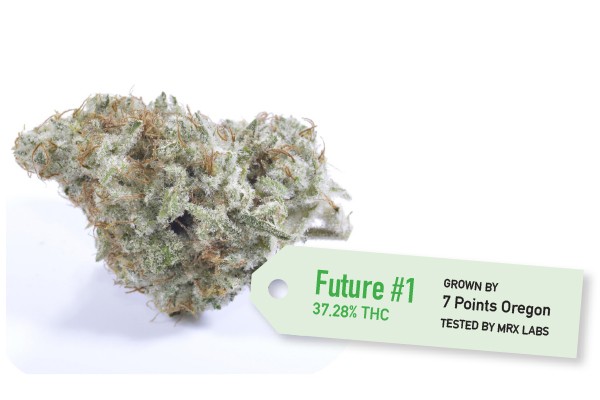 Last week, I tried flower with the highest THC I've ever seen, or had: 37.28 percent. (I rarely see strains higher than 30 percent at dispensaries.) In a post on Instagram and Facebook, I learned that the strain, "Future #1," was grown by Portland-based 7 Points Oregon, and tested by MRX Labs, which tested the sample four times after initial results to confirm, then posted congratulations to 7 Points Oregon for growing the strongest sample they had ever tested.

My reaction was "Huh. I bet that's some strong weed. Good for them."

But there were some people in the comments section of the post who had different reactions. Angry, accusatory reactions—some from fellow growers whose man panties were getting painfully twisted. Well-researched and thought out feedback included tales that the results were doctored by the lab, that it wasn't physically possible for a strain to have that much THC, and how the highest THC doesn't mean the best weed. (That last one is spot on, however.)

Before I tried the weed, I tried the patience of those involved, along with a big brain regarding bud, Mowgli Holmes, CEO of Phylos Bioscience.

Future, bred by Exotic Genetix, is a cross of whatever we are now legally obligated to call Gorilla Glue #4, and Starfighter f2. From a package of 12 seeds, 7 Points Oregon found nine females, retaining four very distinct cultivars with different growth characteristics, terpenes, aromas, tastes and potency. They discovered that Future #1 was the most potent of the four, and it went on to win second place in category of Most Potent Flower at the 2017 Oregon Dope Cup, with 32.5 percent THC.

The main point here is: why the fuck would you want a plant that strong? That's like going to 180 proof from 150 tweet this

The reaction to the 37 percent result for the 7 Points Oregon team ranged from surprised and curious, to skeptical and concerned. "We knew that this could be a contentious issue," they wrote in an email. "MRX is an ORELAP accredited lab, and our relationship with them has been nothing but professional and consistent. They were rightfully cautious when the results came in. Quality Control tests were run four more times to calibrate equipment and validate the number prior to reporting. They did their due diligence."

"What about the scoffing dismissals that cannabis physically can't test at 37 percent THC?" I asked Mowgli Holmes, who actually knows WTF he is talking about in these matters. He replied:

"The general consensus seems to be that the physical limit is gonna be around 35 percent. But we don't really understand that, or why it is, and we're just guessing. So could a plant get to 37 or 38? Maybe. Probably. Not impossible. It is pretty unlikely though. The main point here is: why the fuck would you want a plant that strong? That's like going to 180 proof from 150."

Not 7 Points Oregon, who wrote, "For most of our team, a cultivar that hits 30 percent or above is too potent. And we are big advocates of the concept that THC percentage is only part of the story regarding cannabis. Lesser known cannabinoids and terpenes play a vital role as well. We acknowledge that THC numbers do matter to consumers in the Oregon Rec market—some look for terpenes, some for THC. As far as we're concerned, both perspectives are valid."

I viewed all four of the variations of Future harvested. All looked like frosty, light green weed, but the scents varied considerably. Between the four, I was least drawn to the nose of Future#1. It's quite good, but the others better captured my interest and attention.

I vaporized a dispensary provided sample at 290/330/350/380F, which offered a clean, wintermint initial taste that settled in with the subdued hints of flavors of its GG#4 lineage.

And yep, it got me stoned. Weed does that. With heavier shoulders, and a relaxed, slowing down of the fevered mind, it would be great for those seeking those intentions.

There are strains grown by 7 Points Oregon and other growers with half this potency that would also do great things for those intentions. High THC is great, I'm glad I tried this, but I'd be just as interested in next trying a strain with the highest recorded terpenes.