"Reminiscence" only reminds us of better movies

Is there a word for when every element of a movie on its own seems like it should work but, when taken as a whole, the elements make for an experience that is hugely underwhelming and crappy? "Craptacular" is too dismissive and "Ridumbculous" doesn't really get the point across, so I'm going to go with "Deprexcellent," something so close to greatness that it's just sad when it doesn't get there...at all. Even a little.

That's how I would describe "Reminiscence," a movie that should be good, yet left me feeling emptier than Chipotle. With a cast featuring the always excellent Hugh Jackman, the ethereal and intense Rebecca Ferguson and the subtle Thandiwe Newton, that should have almost been enough to carry the film right there. Adding to that, it's the directorial debut of Lisa Joy, the co-creator of "Westworld" and one of the writers of the all-time classic show, "Pushing Daisies." Then to top it all off, it's a futuristic Neo-noir piece that looks like a blend of "Waterworld," "The Maltese Falcon" and "Inception." That's my sweet spot right there. 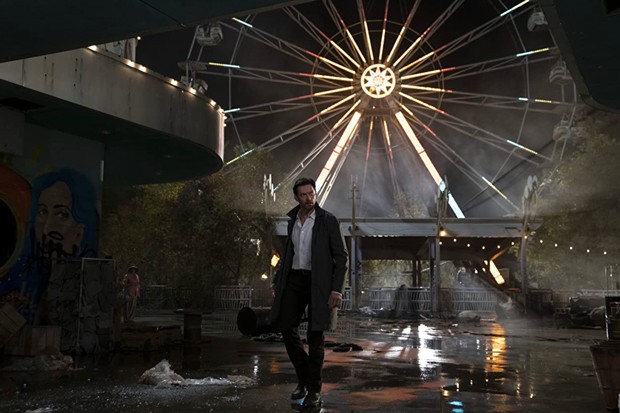 But somehow, the nomination of all of these cool aspects doesn't do anything to make it a memorable film, which is an absolute shame, because "Reminiscence" is gorgeously shot and the actual world-building is astounding. The film is set in the near future when climate change has made the seas rise and Miami is now this mostly flooded city where people live on rooftops of half-sunken skyscrapers and drive through constantly flooded streets. Jackman plays Nick Bannister, an ex-soldier who operates a business (along with his partner, Watts, played by Newton) that lets people go back and relive specific memories or access moments in their mind that they can't remember anymore.

Enter Ferguson's femme fatale, Mae, who comes in looking for her...missing keys? This leads Bannister down a rabbit hole of drug addicts, organized crime and the powerful politicians of Miami that will cause him to lose everything while also finding himself. Or some corny line like that. The story itself is where the problems of the movie really come to the forefront.

I would watch another dozen movies set in the world of "Reminiscence." The sunken city of Miami is incredibly well developed and awesome to look at. That, combined with the idea of helping people gain access to their memories is a great concept because it allows us to see how everyone in this world is basically trapped thinking back to a time when things were better. Looking forward to the future is depressing and hopeless, so people are mostly caught in a loop of trying to remember when things were less terrifying.

But the mystery of Mae (who goes missing 10 minutes into the movie, causing Bannister to become a detective), is a poorly developed one. When all the questions are answered, we see that it's a very simple and predictable mystery that was only beguiling because of the structure in which it was told. There's nothing here to think about, only to look at.

The sunken world of "Reminiscence" deserved a good story to be told in it. The potential was there for the film to be a classic along the lines of "Inception," but you need more than good world-building when telling a science fiction tale. So much of "Reminiscence" is built on the spine of a romance we never once care about, leaving everything to feel weightless and, ultimately, pointless. If the machine Jackman used to send people into their memories existed, I would go back to before I saw the film, so I could remember it as a very cool idea with exciting prospects, instead of the sadly incomplete mess that was to come.