As she takes a sip of a cereal milk latte, mermaid blue-haired Nickol Hayden-Cady, pastry chef and owner of Foxtail Bakeshop & Kitchen, describes her work flow. 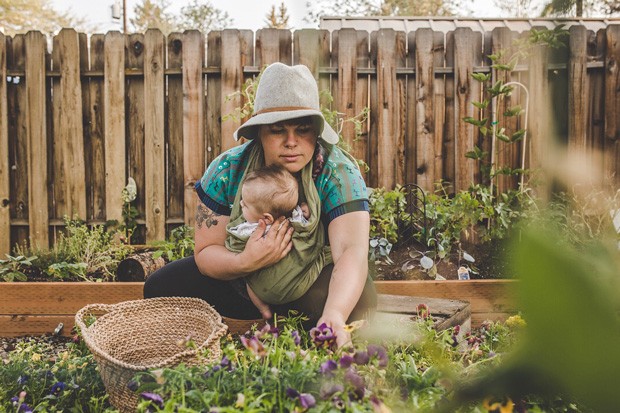 Hayden-Cady already had a successful pastry business before opening Foxtail in the Box Factory last year.

After seeing a photo of Hayden-Cady picking purple and yellow pansies from her backyard garden for the bakery, son Forest nestled in a sling, I wanted to know what a day in her life was like, so she let me follow her around.

"Thursday is my bake time," Hayden-Cady said. "I don't want to let that go because I like to do every job at my shop one day a week."

Once everything is egg-washed, baked, decorated and put in the front case or boxes, Hayden-Cady makes herself a cup of coffee with collagen, MCT oil and cinnamon. It's 6 am by then, and after working alone for hours, her staff starts to arrive.

"We prep for the day," Hayden-Cady continues, "Either we talk about what we're going to make for the week or specialty orders. This week we'll discuss the new ice cream project. It's called Treats from the Den. We'll be doing high-end ice cream—not scooped, but to-go ice cream sandwiches, cones dipped in chocolate. One is called the rainbow bright ice cream sandwich. It'll be a cart outside."

Hayden-Cadey flips through photos on her phone until she finds the mockup of the project— a colorful rolling cart with a hand-painted fox and flowers on the body, topped with a bright fabric umbrella. She expects to launch the cart in July.

When the staff arrives, five and a half hours after her arrival, she also uses the time before opening to pump up the staff.

"I want them to be ready, know what's up and put good vibes in our food," Hayden-Cady said. "We want people to leave happy."

The doors open at 8. Hayden-Cady weaves through, talking to customers, ordering or doing production until she goes home between 4:30 and 5 pm.

“I wanted to be a working owner, that’s what I set it up for. I like the nitty-gritty of every day.” - Nickol Hayden-Cady tweet this

At home she returns emails and makes dinner with her older son, Jasper, who's almost 7. "Once we're done, we all sit down as a family to eat," Hayden-Cady said. "We eat outside in the garden. Jasper plays; I get to hang out with Forest."

Her youngest son is a little over a year old, just two weeks older than the shop. He plays in the dirt while Hayden-Cady cleans spinach and tends her garden.

"I pick pansies every other day for the shop," she muses.

The backyard garden has a lot of herbs, but it's mostly edible flowers: pansies, nasturtiums, bachelor buttons, calendula and roses. She also grows vegetables for the kids. Twelve varieties of berry bushes surround the garden, and on this night Hayden-Cady checks on her Italian bees to make sure they're doing well. Forest helps her get eggs from their 10 chickens.

When the kids are ready for bed, Hayden-Cady reads to them.

After reading she relaxes with her husband, Joshua. They clean the kitchen together, listening to Bon Iver and the new Little Wings album on their vinyl player.

"I go to bed at 9 pm," said Hayden-Cady, "I meditate every night before bed. Then I do it again."

On Saturdays in the summer, at the height of wedding season, Hayden-Cady starts at 1 am. She makes every wedding cake herself and personally drops them off to each client. Saturdays typically end at 10 pm.

The chef life demands long days and dedication, but Hayden-Cady has a strong support system. Her husband is a special needs teacher and works from home. Her parents help out and her mom works at the restaurant and does the books.

"I wanted to be a working owner," said Hayden-Cady. "That's what I set it up for. I like the nitty-gritty of every day. I like scrubbing the mixer. There are things we do that give us pride."