The Sweet Tunes of Sustainability

Local music venues pair with the Broomsmen for sustainable cleanups 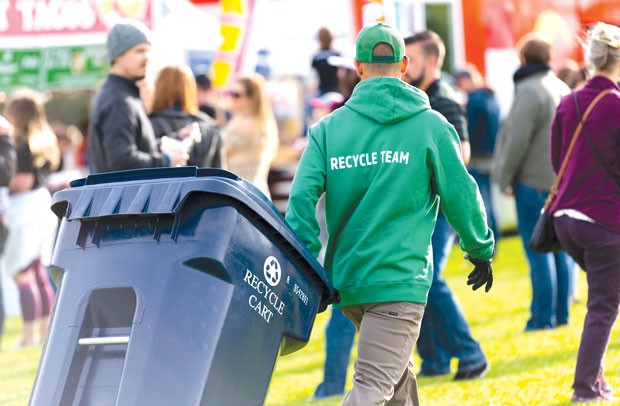 Concerts draw enormous numbers of people to Bend's venues. In recent years, artists such as Norah Jones, Jack Johnson, Zooey Deschanel, M. Ward and many others have played for large crowds—which also have the potential to leave large amounts of waste.

Organizers for concerts at the Les Schwab Amphitheater and the Athletic Club of Bend aim to make their shows Zero-Waste events. Zero Waste is an initiative that strives to make trash emulate natural cycles, where all the waste that is created is then reused.

These venues work with local business, The Broomsmen, to promote sustainability. The crew aims to make it easy to recycle—offering clearly labeled bins for recycling, glass, compost and landfill waste. On average, The Broomsmen say they can increase a venue's landfill diversion rate by 72 percent.

Cutting Down on Waste

"The most important thing is to avoid overall consumption and think ahead," said Phil Torchio, owner of The Broomsmen.

Torchio says the business started out as a wedding cleanup service three years ago. From that experience, he became aware of the massive amount of waste each wedding produced and started to think of solutions.

"The goal is to educate everyone on what to do with their waste. It's more than just what bin you dispose of your waste in. It's how we can all work together to make less waste," Torchio said.

The Broomsmen staffs its teams through Abilitree, a company that supports intellectually challenged adults.

After a Bend event, The Broomsmen take the compost to Knott Landfill. The bottles and cans go to the Cans for Kids charity and Oregon Bottle Drop, and cardboard goes to Deschutes Recycling.

This summer, the Athletic Club has The Broomsmen on hand for all of its concerts.

Cyndie Rouse, special events coordinator at the Athletic Club, said, "We love it; it's the only way to get people to recycle properly—otherwise they just don't pay attention."


"On any given summer day, the amount of tourists in Bend seems to exceed the local population. We need to do a better job as a community to promote recycling for the tourist," —Phil Torchio tweet this

"At each event we teach people how we recycle, Bend style," said Torchio. Still, The Broomsmen isn't the only business promoting sustainability. Three years ago, the team at Les Schwab Amphitheater pledged a Take Note Initiative, designed to reduce waste and make the amphitheater a more environmentally friendly venue.

"We love the planet and want to keep it nice," said Brent Joseph, venue manager at Les Schwab. "The more organizations do to promote sustainability... is incredibly important."

In the first year of the Take Note Initiative, officials at Les Schwab say they reduced waste at the Amphitheater by 50 percent.

"On any given summer day, the amount of tourists in Bend seems to exceed the local population. We need to do a better job as a community to promote recycling for the tourist," said Torchio.

Visit Bend released a study of how many people visited Bend. In 2015, 2.5 to 3 million tourists came to Bend and stayed and average of 2.4 days. To put that to scale, that would mean almost 20,000 people visited Bend each day in 2015.

"Tourists need to know that importance of recycling in Bend. We all need to do our part," encouraged Torchio.