A column on ageism and ageing

Have you discovered this zany, too-much-fun game? Everyone brings one dollar. Chips work, too. Three dice, each inscribed with L, R, C and a dot. Gambling-lite. It requires no skill other than coming up with your own surefire incantations to guarantee a winning roll, e.g., "Show me that you know me!" or your version of the pre-serve sequence perfected by Spain's tennis wonder Rafael Nadal, hopefully minus the crotch grab. Isn't it astounding how we believe we are in control of outcomes, the course of fate? Yoo hoo.

Our lot is to embrace, make the best of what we get, offer our best efforts, accept the outcome, give thanks, be good sports, make lemonade...all that. But back to the game. You want to roll the dot. Then you don't have to pass your dollar to the person on the right or the left, or, worst of all, permanently sacrifice it to the growing jackpot in the center. Eventually the winner takes all. They don't have to, though. They could, instead, redistribute the dollars, all or some, so the game can go on, the fun can continue. Hoard or pay forward. And how about the losers? Accept? Protest? Leave the game? Demand a rerun? 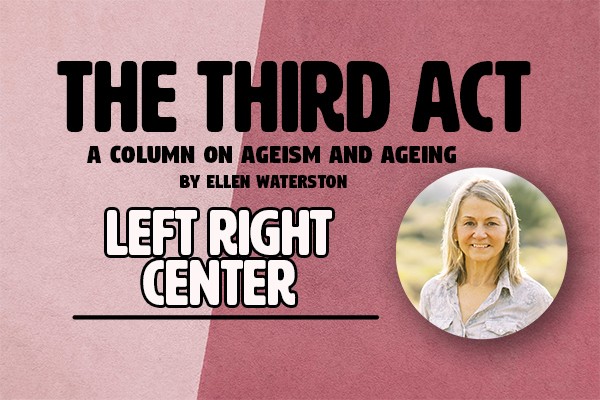 As we gather for our simple-to-extravagant versions of Thanksgiving with strangers-to-be-friends, BFFs, family, kin, don't just leave your shoes at the door, leave the political left and right of you there, too, please. If you can, stay centered in family, focused on what matters, like saying thank you. Family and giving thanks are church. Politics are state. Younger generations at the table are watching us olders for signs of wise elders.

In addition to the aptness of the name of Left, Right, Center in the wake of the midterms, my rah, rah comments are also inspired by a Nov. 9, 2022, post by American historian Heather Cox Richardson. She writes that the recent elections put her, "In mind of what poet Walt Whitman wrote about the momentous election of 1884. In that year the Republican Party had become so extremist that many of its members, disparagingly called 'Mugwumps' by party loyalists, jumped ship to vote for a reformer, Democrat Grover Cleveland. It was a chaotic and consequential election, for it showed those Republicans who stayed with the party that they must moderate their stances or become a permanent minority. Younger Republicans like Henry Cabot Lodge of Massachusetts, Robert La Follette of Wisconsin and Theodore Roosevelt of New York took notice and turned their party back toward its roots, protecting the rights of individuals rather than of corporations. By the end of the century, they had captured the imagination of the nation... but on Election Day, 1884, all anyone could know was that there were currents and crosscurrents. What would come from any of them would not be clear for another decade or more."

She goes on to underscore, given how tense things were in that 1884 election, the miracle was that voting took place at all, the right to choose our lawmakers was exercised. She closes with Walt Whitman's words, an anthem really, written in an English of old.

"If I should need to name, O Western World, your powerfulest scene and show,
'Twould not be you, Niagara—nor you, ye limitless prairies—nor your huge rifts of canyons, Colorado,
Nor you, Yosemite—nor Yellowstone, with all its spasmic geyser-loops ascending to the skies, appearing and disappearing,
Nor Oregon's white cones—nor Huron's belt of mighty lakes—nor Mississippi's stream:
—This seething hemisphere's humanity, as now, I'd name—the still small voice vibrating—America's choosing day,
(The heart of it not in the chosen—the act itself the main, the quadriennial choosing,)
The stretch of North and South arous'd—sea-board and inland—Texas to Maine—the Prairie States—Vermont, Virginia, California,
The final ballot-shower from East to West—the paradox and conflict,
The countless snow-flakes falling—(a swordless conflict,
Yet more than all Rome's wars of old, or modern Napoleon's:) the peaceful choice of all,
Or good or ill humanity—welcoming the darker odds, the dross:
—Foams and ferments the wine? it serves to purify—while the heart pants, life glows:
These stormy gusts and winds waft precious ships,
Swell'd Washington's, Jefferson's, Lincoln's sails."

I have voted in 14 presidential elections and countless midterms, placed my ballot in the box accompanied by the most fervent of incantations. Even so, often the results weren't what I wanted. What's as good is how reassuring and invigorating it is to see that the warp and woof holds and holds, that the fabric retains its core strength despite, despite. I am thankful to be a participant in this grand experiment called democracy. It's asking each of us to "show me that you know me." We just did and we will again and again.