The Third Act: We're in what some refer to as the "Psychedelic Renaissance | The Source Weekly - Bend, Oregon

The Third Act: We're in what some refer to as the "Psychedelic Renaissance

A column on ageism and ageing

If change is the only constant, why is it so hard to change one's mind about things? Witness the ill effects inflexible thinking is having on many aspects of our society.

But sometimes, some special times, taken separately or together, compassion, modern research and aboriginal wisdom prevail, resulting in change that is for the good of the whole. 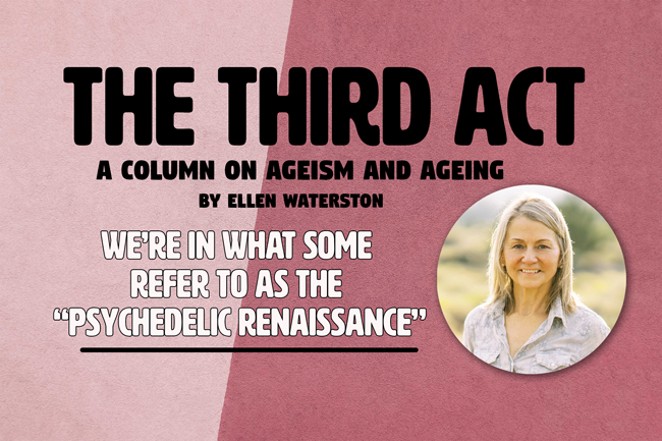 The health benefits of standard, over-the-grocery-counter mushrooms are well known. They're a rich, low-calorie source of fiber, protein, antioxidants, vitamin D and zinc, and are an anti-inflammatory. Mushroom clubs, including in Central Oregon, are showing up everywhere, as mushroom hunters search for porcini, chanterelles and truffles. No special legislation required for these hunter gatherers. That's not the case for psychedelic varieties.

As a child, Lewis Carroll's dreamscape masterpiece, "Alice In Wonderland," was my first encounter with the notion that a mushroom was more than sauteed garnish for red meat or a healthy addition to salad. With the hookah-smoking Caterpillar in the role of what would now be referred to as a "trip sitter" to monitor her experience, Alice nibbled opposite sides of a mushroom, one making her taller, the other—smaller. (She ultimately settled on her original height, interpreted by some to be Lewis Carroll's way of encouraging young people to accept themselves just as they are.) Grace Slick and her band Jefferson Airplane co-opted Alice's mushroom adventures in the 1967 song "White Rabbit" to extoll LSD use:

And if you go chasing rabbits And you know you're going to fall Tell 'em a hookah-smoking caterpillar Has given you the call. Call Alice..."

Those were the early Boomer days of Vietnam War protests, freewheeling counter-culture movements, Woodstock and lots of experimentation with psychedelics. Alarmed by the social upheaval and what then-President Richard Nixon considered rampant LSD use by young Americans, he instigated the War on Drugs in the mid-'60s. In 1970, Congress passed the Controlled Substance Act, effectively halting research on the health benefits of psychedelic mushrooms.

But 50 years later psilocybin studies are back. In 2018, the U.S. Food and Drug Administration proclaimed psilocybin a breakthrough therapy in treating severe depression, a designation the agency applies to drugs that demonstrate improvement over existing treatments. In 2021, the U.S. federal government finally re-entered the psilocybin research game, having left the funding during the hiatus to private institutions, including a 1990s Johns Hopkins study that identified the benefits of psilocybin when used to treat depression, chronic pain, addiction and anxiety. In 2020, Oregon voters approved a ballot measure to initiate a regulatory and licensing framework that, beginning in 2023, allows patients to take psilocybin under supervision. Oregon is the first state to do so.

According to a 2020 Pew Trust survey, "the Connecticut legislature has started the process toward legalizing centers in which veterans and first responders could be administered psilocybin...Texas, Utah and Washington state have set up task forces or funded research into the medical use of psilocybin. Maryland has created a $1 million fund to study alternative treatments, including psychedelics, for PTSD or traumatic brain injury, and to pay for such treatments for veterans. Ballot initiatives that would legalize psilocybin are underway in Colorado and California. Ann Arbor, Michigan; Denver; Oakland, California; and Seattle, have passed measures that essentially decriminalize psilocybin mushrooms ..." We're in what some refer to as the "Psychedelic Renaissance," a bit ironic in that indigenous populations around the world have recognized the beneficial effects of psychedelics for hundreds of years. It's not the first time "modern" culture is late to the plant party.

In his book, "How to Change Your Mind: What the New Science of Psychedelics Teaches Us About Consciousness, Dying, Addiction, Depression, and Transcendence," author Michael Pollan examines LSD, psilocybin, Ayahuasca and other compounds for "their potential to relieve several kinds of mental distress, including depression, anxiety, and addiction."

"Several of the scientists I profile," he says, "are convinced psychedelics could revolutionize mental health care and our understanding of the mind." All this sounds like a reason for anyone suffering with chronic pain, stress, or mental health challenges to celebrate!

But not so Oregon fast. Just as with the 2016 process of cannabis legislation, Oregon's psylocibin measure gives counties the ability to opt out. Many that did in 2016 are asking voters to do so again...although it should be noted the 2016 naysayers have since relaxed their opposition to cannabis and, thank you very much, are profiting from their change of mind. So how about a change of mind on this issue as well? How about clearing the way for regulated and supervised psilocybin uniformly available to help all Oregonians, young and old, in health- and life-enhancing ways we only just begin to understand? As Michael Pollan says, "This book has taken me places I've never been—indeed, places I didn't know existed."