It's hard to pinpoint exactly when the over-the-hill gang starts reading that particular section of the newspaper, but it seems to start roughly at age 60. The closest to a no from 60-somethings is "Not yet." or "Maybe soon." Otherwise, it's a definite yes in response to my asking "Do you read the obituaries?"

It makes sense, as us oldsters progress through the go-go, slo-go and no-go stages of life, that we likewise migrate from wedding and anniversary announcements to the obits. At first blush it might seem dreary, given the subject matter. Unlike wedding or anniversary notices, an obit is not the heralding of a beginning nor a milestone of something that is ongoing in real time, rather the acknowledgment of "le point final," the end of life's sentence, a death. 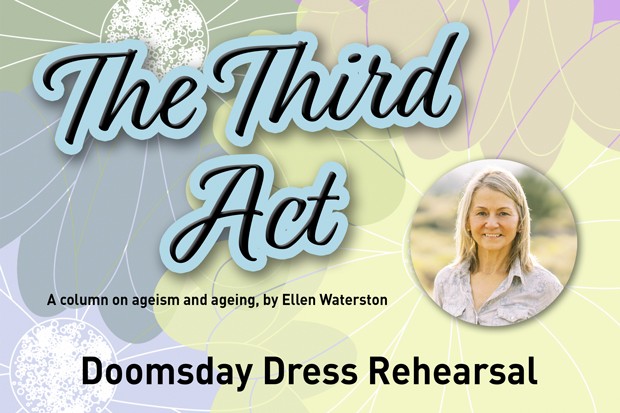 But what is alive in the written and online tributes to those who have passed is each individual's purchase and imprint on the world. You can feel the energy of the unique lives described. Such daring, joy, sacrifice, suffering, triumph, purpose! Even if we don't know the deceased, we can identify with their honest effort to stitch together a well-lived and well-loved life in the time they had. We can see our own struggles and ambitions within these brief biographies, can spot a goal of our own that they realized in their lifetime and we had damn well better get a move on if we're going to accomplish it in ours.

Today, with obituaries online, notifications can be broadcast instantly and widely. It wasn't always so. The word obituary comes from the Latin "obitus" meaning "going down," "death." The first known public notifications of deaths were printed on papyrus in the "Acta Diurna" in 59 BCE in ancient Rome! Flashforward to the 1800s in the U.S., when obituaries became common during the Civil War as a way of notifying relatives. In the 1930s, thanks to better printing presses, obits began to come into their own. Newspaper editors composed elaborate tributes to the most noteworthy citizens (sometimes jumping the gun, as was the case with Mark Twain and Ernest Hemingway—pronounced dead before their time!).

Commoners, however, were acknowledged but only in passing (no pun intended) with terse death notices that included a death announcement, short biography, list of survivors and funeral details. That changed when newspapers recognized there was money in them thar deaths and began selling space for obituaries written and submitted by family members. As a result, the commoners' template gave way to a more freeform style, the spotlight and ink shared by the famous with the everyday person. One relatively recent confirmation of this sea change was, after the September 11, 2001, attacks, The New York Times published short narratives on every single one of the 3,000 killed. "Everybody was recognized as a whole person," stated obituary expert Susan Soper. You'd think that would go without saying.

At a recent gathering with friends, I quizzed those present apropos of my anecdotal research about obituaries. The 90-year-old matriarch of the family abruptly got up from the table and disappeared into her study, returning with a very small piece of paper inscribed with the following verse which, she claimed, was included in the 1943 obituary for Elinor Glyn, the captivating author of racy (for the 1930s) romance novels.

Would you like to sin
With Elinor Glyn
On a tiger skin?
Or would you prefer
To err with her
On some other fur?

In contrast to this humorous send-off, but no less engaging, was a recent tribute in the The Bulletin honoring the life of a woman who dedicated her life to training horses. In 1981 she was the first female to win the Snaffle Bit Futurity. Her favorite horses, Cobra Chex and Lena, are mentioned by name.

"Horses not only touch us with their spirit," she was quoted as saying, "but they allow...a brief moment, experiencing freedom on earth—when horse and rider become one."

I am always struck by the exquisite configurations of our snowflake selves. When we put our ear to the seashell of others' lives and listen, really listen, I wonder how in the world we fail to see that we all drink from a common well of humanity? How can these glimpses not inspire us to work toward a common wealth and welcome?

Here's a challenge for millennials and up. Pen your own obituary every year. Write it in the third person. List accomplishments achieved, sure, but more importantly address how you have manifested in the world to date, leaned into living. It's a mapping exercise to evaluate who, not where, one is relative to who one would like to be at the conclusion of the final act. This dress rehearsal never fails to chasten and motivate. Ask me how I know.

—Poet and author Ellen Waterston is a woman of a certain age who resides in Bend. "The Third Act" is a series of columns on ageing and ageism.