The Unicorn of the Cascades | Natural World | Bend | The Source Weekly - Bend, Oregon

The Unicorn of the Cascades 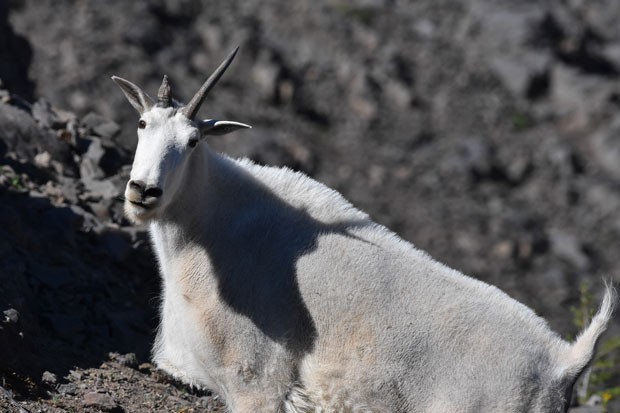 Wow! A "unicone" on the cover of last week's Source, and no one told me! The subject of unicorns has been discussed and dissected ad nauseam—but last summer, a pal from Camp Sherman sent me photographic proof of another creature: a living "unihorn."

Most of us know the unicorn is a legendary creature, described since antiquity as a pony-like beast with a single long, pointed, spiraling horn projecting from its forehead. It was depicted in ancient seals of the Indus Valley people and is described by various ancient writers, including Ctesias, Strabo, Pliny the Younger and Aelian. Even the Bible describes such an animal.

Psalms 92:10 talks about a one-horned animal: "But my horn shalt thou exalt like the horn of an unicorn: It shall be anointed with fresh oil."

In encyclopedias, its horn was said to have the power to render poisoned water potable and to heal sickness. In medieval and Renaissance times, the tusk of the narwhal was sometimes sold as unicorn horn. (And so began the slaughter of elephants and rhinos, still going on today.)

But here's what the finder of Oregon's "unihorn," Peter Esherick, has to say about his lifetime adventure searching for it/them:

"While I've been hiking up to the saddle on Three Fingered Jack almost every summer for the last 60-plus years, it was only two years ago that I first saw a mountain goat on the mountain, picked out by the sharp eyes of my granddaughter, Camila. We weren't sure at the time what we were seeing, which led to a spirited debate about whether those white specks in the distance were polar bears, goats, sheep or best of all, unicorns! So of course, we consulted the local expert and, of course, Jim set us straight.  'Mountain goats,' he said...adding, 'but then again...'

"Now, each year when we hike up there we are always on the lookout for mountain goats or unicorns, always hoping to get a close enough look to be able to tell for sure. So this time around my daughter Katrina and I got up early one Wednesday in July (too early for grandkids!) and made the hike to Canyon Creek Meadows and up to the saddle. Over to our right about 300 yards away, we could make out 12 mountain goats: nine adults and three babies!

"With that success we decided to take visiting friends up the next Saturday. I had carried my long lens and big camera all the way up there and I was not going to be deterred, so back we went the following Wednesday, making sure to get an early start. We got to the moraine over the ice lake about 9 a.m. and scouted around: not a mountain goat in sight! Dang! 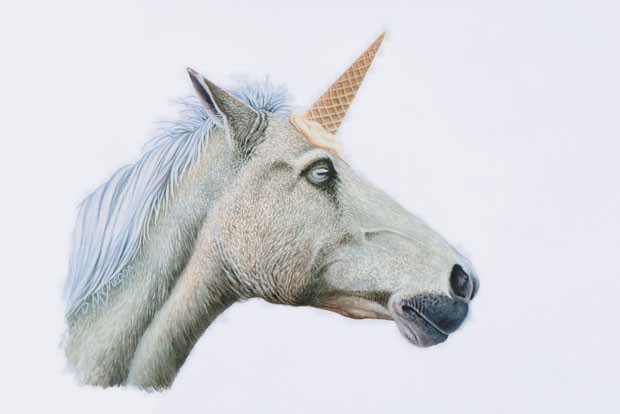 "Well, maybe they're on the other side again, I thought, so I continued on up towards the saddle while Katrina held back with some phony complaint about her feet hurting. Just as I came around a tree on the last knoll before the saddle, bang! There they were! Five mountain goats quietly grazing and just laying around, no more than 70 yards away!

"So I fired off a bunch of photos with the my 500mm zoom and contemplated getting closer. I figured it might not be wise to continue on the trail which would have put me 10 feet below a goat who could have easily knock me full off the mountain with one head butt, so I waited until he'd had enough of watching me and he wandered off.

"That let me continue up along the trail obscured from sight of the other goats. Popping over the moraine ridge a few minutes later I was now only about 20 yards away from a... goat...? Or was it a...a...unicorn!  True to Camila's initial observations, I had found the unicorn! (Or, as her brother Samuel more correctly identifies it, a unihorn.)

"This fellow had one broken horn, but he seemed to be proud of it, so he posed for me for 10 minutes before wandering off to join the rest of his clan. I could probably go on, but as a good friend has said on occasion, 'I've already told you more than I know. But we'll be back next summer and continue the observations. See ya' up there!'"

In closing, in recent research, I was amazed to find unicone's horns—like the one seen on last week's cover—are available in most grocery stores. If you see a live unicone, please don't shoot it. Be warned though, most cones found in stores are not "organic." However, I understand, if stuffed with ice cream they are delicious.