With a second vaporizer-related death in Oregon, the governor issues a temporary ban

In light of two deaths related to vaping, Oregon's governor has issued a temporary ban on flavored vaporizer products. In late September, state officials announced that a second Oregonian had died due to a severe lung illness related to vaping. That most recent death was a person who had been hospitalized with "respiratory symptoms after vaping cannabis products," the Oregon Health Authority reported. Gov. Kate Brown issued the 180-day temporary ban on flavored products Oct. 4. Brown's executive order also directed OHA and the Oregon Liquor Control Commission to develop legislative proposals that would ban flavored vaping products permanently—including both THC and nicotine products. The order also directed the agencies to develop legislation that would require companies to disclose all ingredients in vaping products. The order also directed the agencies to develop plans for consumer warnings on THC and non-THC vaping products. 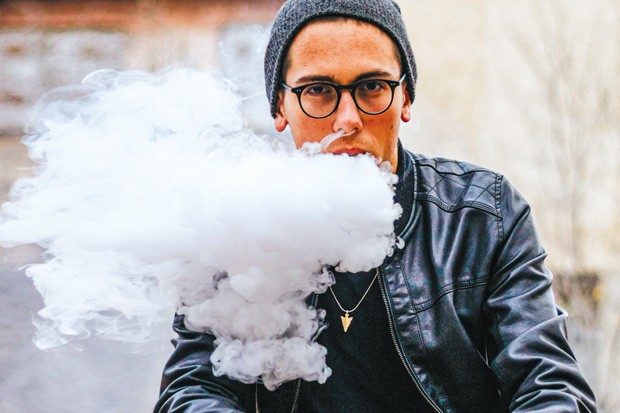 On Sept. 27, Rep. Cheri Helt (R-Bend) announced that during the upcoming February legislative session, she would introduce a bill that would ban retail and online sales of all flavored e-cigarettes and vaping products in the state. Helt is working with fellow representatives, Rep. Janelle Bynum (D-Clackamas) and Rep. Rachel Prusak (D-Tualatin/West Linn), on the legislation.

An impact on local business

Those in the vaping industry see bans and moratoriums as "knee-jerk" reactions they fear will lead people to the black market to obtain vaping products. Steve Johnson, business operations manager at Central Oregon's High Mountain Mist—a tobacco vaporizer retailer, explained Sept 30—before the temporary ban came out—how many of their customers are former smokers who now use vaporizers to avoid the damaging effects of smoking.

"We have thousands of customers here in Bend that don't smoke cigarettes anymore because they vape, and they've seen changes in their health. We had a guy come in, very emotional, yesterday," Johnson told the Source Weekly. "He smoked, he's a cancer survivor, and now he vapes and he runs marathons. He's very afraid that this is going to force him back to something that he knows is going to kill him."

Johnson said because tobacco products are already regulated by the Food and Drug Administration, ingredients are required to be included on the labeling, unlike black market or as-yet-federally-regulated cannabis products—a case for regulation, instead of bans. Still, sales at High Mountain Mist have been down 25 to 30 percent since the vaping crisis erupted, Johnson said—and the company permanently closed the doors of its Prineville location Sept. 28.

Vaping industry leaders—along with growers and producers involved with hemp and CBD products—have been awaiting guidance from federal agencies on a number of regulatory fronts, since the 2018 Farm Bill essentially legalized hemp and CBD. With this recent crisis, industry leaders say there's even more reason for the federal government to fully legalize THC cannabis, believing that more regulation of the industry is safer for consumers.

"As investigations begin to reveal the cause, it's becoming apparent that many of the issues appear to relate to unregulated and illicit cannabis and nicotine products," wrote Andrew Kline, director of public policy for the National Cannabis Industry Association. The NCIA has been gathering signatures, calling on Congress to remove cannabis from the FDA's list of Schedule 1 drugs—which could allow federal regulators to better oversee the industry.

On the notion of federal regulation, Gov. Brown wrote in her Oct. 4 release, "This order will help protect Oregonians in the short term, but federal action is long overdue to address this national public health crisis. It's time for the FDA to regulate flavored vaping products and other additives for what they are: products that are addictive, dangerous and targeted squarely at our youth."

An alternative for vapers?

On Oct. 1., Willamette Week published a review of another product marketed as an alternative to vaporizers: The Inspire cannabis inhaler from Eos Labs. According to the company, the inhaler delivers a dose of THC, CBD or a combination of both, without the burning required in standard vaporizers. A number of companies are beginning to market inhalers as an alternative to vaporizers, the story said. The Inspire inhaler is not yet available at Bend dispensaries, according to the Eos Labs website.