The View From Paradise 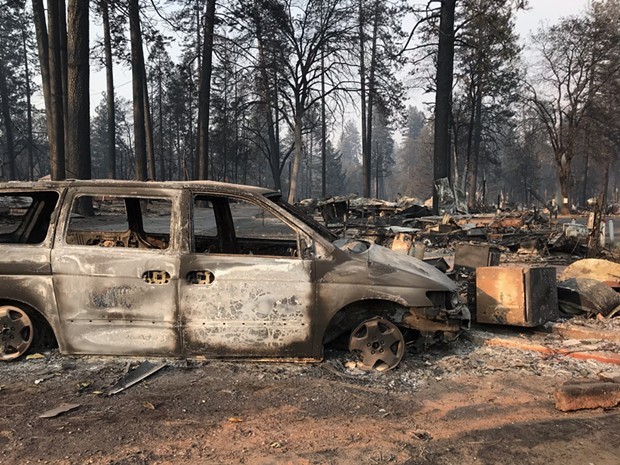 I am no stranger to wide ranging and complete disasters. In the late '90s I went through a category 5 hurricane that, in a 24-hour span, turned an island I lived on upside down.

The devastation was total, but it was also familiar. We grow up with storms and bad weather. Hurricanes are an unruly form of a big storm, so when it happens you process it faster. Storms can be varying degrees of bad. Storms are natural.

Fire is something that is ingrained in us. Humans tamed fire 10,000 years ago. It provides warmth, it's the backdrop to camping trips, holiday parties, it coexists with us in our homes as fireplaces and candles and we decide when it comes and goes. For me, fire is subservient to my needs and wishes. It is, unlike storms, controllable.

Fire is not something that we expect to turn on us and do what it did to the people and the entire city of Paradise, California.

Before I went down yesterday I watched news reports from the scene where reporters said the fire had, "swept through" Paradise, that it was a scene of "devastation." They utterly missed or refused to say what has happened here, or perhaps they have seen fires before and this is their normal. It should not be.

The media packages disasters in neat little 20 second clips so they can cut to the commercial break, but this place deserves more than 20 seconds and a few contrite words.

This place, these people, they need more.

In Chico survivors are in what I recognize as a second stage of disaster. They know they have lost everything; local help in the form of free corner street barbecues, clothing and tents are here for them. But on Wednesday it will rain, and life will get far more serious for them. There is no military, no tent cities, no major FEMA presence.

There are huge gleaming trucks emblazoned with Disaster Response from every major insurance agency in parking lots. I saw rag tag survivors lining up to make claims inside where they had air conditioning and heat and smiling claims agents...only to go back to cars, or tents, or the few hotels that had rooms for another night after the fire.

I saw 15 gleaming state police SUVs pass by part of Trump's security detail. He landed in Paradise and mumbled words about raking leaves to the media, called Paradise "Pleasure" twice and then left.

I am left profoundly in awe. I am concerned. This fire comes of the heels of Redding, of Shasta, of many others. I live in a similar town where my brother's house sits a stone's throw from the Deschutes wilderness. Homes where the selling point is the proximity of wilderness. What they should be telling you is your home is too close to a sick, overcrowded, and dried-out forest. That your life and home is at risk.

We need to rethink how we build, where we build, and how we manage our forests. Now.

Over the Nov. 17-18 weekend, Bendite Patric Douglas delivered relief supplies on behalf of Bendites and businesses to people working in the area of Paradise, Calif. This is his account of what he saw.