The Wonders of Chickens, for Easter or Any Other Time | The Source Weekly - Bend, Oregon

The Wonders of Chickens, for Easter or Any Other Time

The egg came first. Let's just get that out of the way. For millions of years before humans domesticated the feathered lizards known today as "chickens," countless generations of amphibia and reptiles, including dinosaurs, were laying eggs. The egg is an amazing system for nurturing young beings that's just plain awe-inspiring when you think about it. It's also a delicious and beautiful form of animal protein that no animal had to die for.

When Easter comes around, people steam their homes with vinegar in order to recreate the pretty colors that come naturally from a diverse set of hens. We backyard hen keepers, aka flocksters, understand the excitement. There is something deeply captivating about a multicolored basket of eggs. We just don't care to wait all year to enjoy it. 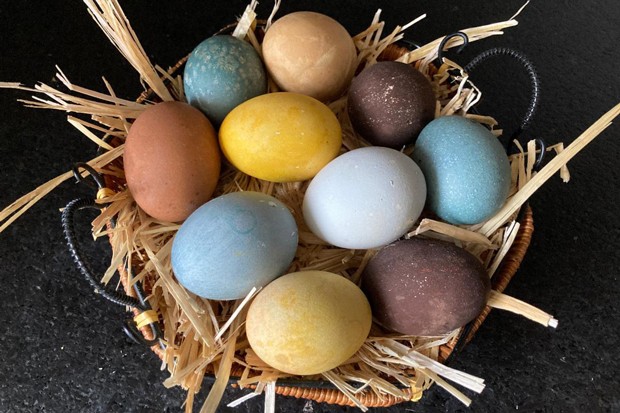 For the flockster, every day is like Easter, especially if there is a blue-egg layer in the flock, like an Araucana or an Ameraucana. Then you can have a mix of white, brown and blue eggs. In that company, the brown eggs look reddish next to the blues, and you end up with a haul of red, white and blue eggs.

Each protein-packed spheroid is a reminder of how preferable it is to give your food waste to a chicken rather than a compost pile. The girls cluck pleasantly as they convert soggy noodles, meat scraps, old greens and browned bananas into brunch. They close the loop between your kitchen and garden and connect your home to the surrounding ecosystem.

There is also something soothing and invigorating about the sound of spring chickens scratching in the dirt. Young chicks have an intoxicating zest for life that is fun to be around. After a long winter, I let the hens out of their coop and let them run around the entire back yard, including the garden, where they turn over the top layer of soil and get it aerated a little, like scratching the earth's head after a long sleep, at the beginning of a big day.

Last year my flock had dwindled down to just two golden Buff Orpington hens both named Annabelle. At least they had each other through the winter, but they needed company. And thanks to a deal that went down in a parking lot near the farmers market the other week, we've got some reinforcements.

Related Sorry Folks, We're All Sold Out... of Baby Chicks: The pandemic ignited an interest in backyard gardens and raising animals

Sorry Folks, We're All Sold Out... of Baby Chicks
The pandemic ignited an interest in backyard gardens and raising animals
By Laurel Brauns
Outside Features

I bought a cardboard box with six birds stuffed inside from a market vendor whose eggs I buy when my girls aren't laying enough. The timing of this transaction was meticulously planned. The new chicks had to be big enough to not get pecked apart by the old hens, and old enough to be discerned from the roosters, which we could not accommodate. But the new chicks could not be too big, else they in turn would bully the senior hens.

I set the box of boisterous cargo in the chicken yard and took off the lid. A single feathered head popped up like a periscope. One by one they hopped out. After a polite, deferential period of about 30 seconds, the new chickens quickly made themselves at home. They knew exactly what to do in a chicken yard, and were running around like juvenile delinquents, while the old hens watched from the corner, making concerned squawking sounds in my general direction. But when evening fell, the new girls had all found their way into the coop and were snuggled up on perches alongside the old girls. The flock merger was complete.

The hen party never ends, but if you don't have the yard space, extra bandwidth or desire to take care of living, eating, pooping beings, you certainly don't have to. You can buy eggs from local chicken farmers for your dietary needs. And if you want to make some colored eggs for Easter, buy some cheap white eggs at the store and color them with natural products you can find around the house. Natural dyes give a more "realistic" look to the eggs, with changes in hue and little bumps and flakes that make them look like they came from the nest of a magic bird, rather than eggs with the flawless, airbrushed finish of synthetic dyes.

Many types of household foods, like beets and blueberries, can be used to color anything white. I prefer using dried leaves, spices and flowers, and basically make tea. My favorite materials are turmeric, black tea, blue pea flower, which makes a bright indigo color and is easy to find online.