The World of Lizards

And how grandkids can bring some spirit to your backyard 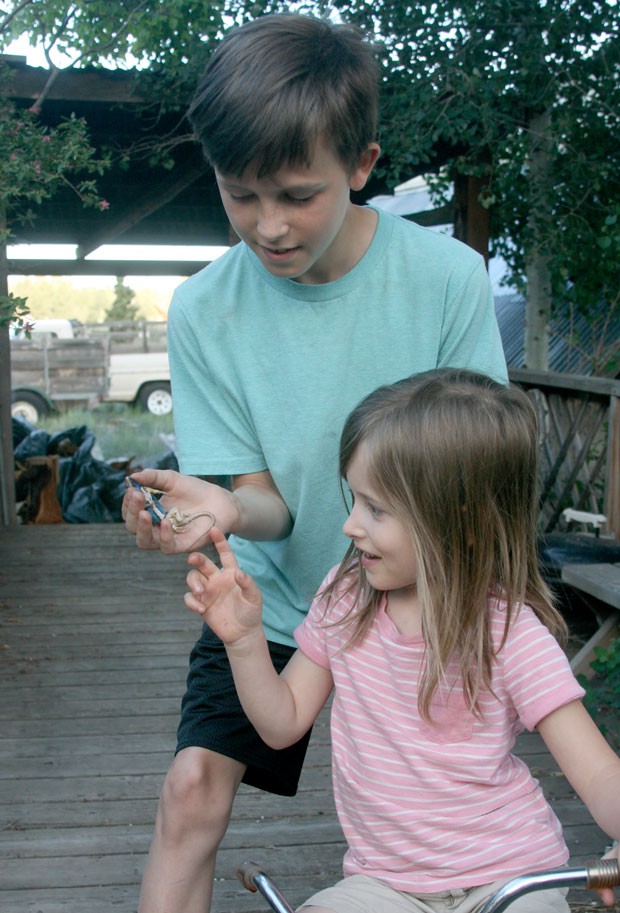 If you want to know (and would like to see up close) what kind of wildlife you have on your place—either in town or out in the country—just turn your grandkids loose and they'll find it/them.

I have a particularly inquisitive grandson, Daxon, who can find a needle in a haystack. He started seeking living things in our back-40 (actually 2.5 acres) when he was about 3 years of age. If it moved, he had it in his hand. He carried grasshoppers, beetles of all kinds, creepy-crawlies and lizards into the house with the exclamation: "Hey Grandpa, look what I got!"

Bumblebees and occasional stinging or non-serious biting insects are about all there is out in the sagebrush that could do any damage to Daxon, so I was grateful for everything he hauled into the house or otherwise brought to my attention.

Over Memorial Day, he and his sister Jane came over from Salem with their dad to help my wife, Sue, build a new raised bed, complete with a hinged netted roof to protect her delicious strawberries from the indigenous wildlife. Of course, the minute Daxon hit the house he did two things. One, he ate a handful of snacks, and two, he went wildlife hunting. Within minutes he'd discovered a colony of creatures I had no idea lived on my little acreage; a new species of western fence lizard.

Now, I doubt if the scientific community—and especially my old pal, Al St. John, our local expert on reptiles and amphibians—will accept my "new species" claim, but the place Daxon found the lizards is really unique: on the backside of my barn. Therefore, they are—to me—known as the Sisters Country barn lizard, horreum habitans andersonii.

Fence lizards are rock lovers; they delight in basking in the sun on the warm surface of rocks and scrambling into crevices for safety to get away from the wildlife (and outdoor cats) who eat them. In addition to cats, hawks, weasels and foxes, there's a local avian predator that really depends on lizards: the American kestrel, the smallest of our native falcons.

As soon as the kestrels arrive back here in the breeding grounds from their wintering in Mexico, they go lizard hunting. One of the lizards that comes out of its winter home in the ground among the rocks and old logs is the western fence lizard.

The lizard's been living off its fat reserve all winter. As soon as things warm up it's wide awake and looking for prey to gobble up... and so is the falcon. Not only is the lizard the source of vital energy to get the falcon back to fighting and mating condition, but the male falcon uses said lizard as some human males use a beautiful bouquet of flowers to woo the love of their life.

The kestrel zooms down, grabs up the poor lizard, dispatches it quickly with its powerful beak and sharp talons, and then, for all to see, holds the lizard in his beak and swoops overhead, calling for a female to notice what a grand hunter he is and how he'll provide for his sons and daughters when they hatch from his dear mate's eggs.

A young kestrel devours a full-grown western fence lizard all in one piece, slowly working it down the gullet. Mom (or dad) stuffed it into the young male's mouth and probably said, "Here kid! This'll stop you from hollerin' for food!"

Anyway, back to Daxon and my new species of fence lizard. When he took me to the place he found it, I was amazed. Not a rock in sight and it was on the north side of the barn where the sun never hits.

When Sue heard of Daxon's find, she said, "Oh, yes, I see the lizards all the time when I'm working in my garden (which is right up against the west side of the barn). It turns out the lizards crawl into the barn by going under the bottom of the boards and into the barn itself. They're safe there from feral cats (of which I have two to put up with at the moment) and other dangers.

There's enough of my junk near the lizard's entrance for them to find the right material and the right place for the female to bury her eggs and raise their young. And somehow the youngsters are learning to keep away from the cats and still find enough insects and spiders to fill their needs.

Now I ask you, doesn't that sound like a new species doing a new thing?

If you live out in the beautiful sagebrush and sand and want to know who lives out there with you, just feed your grandkids and provide them with a pair of binocs, a small notebook and a shoe box to record and collect what's flying, creeping and crawling around your home. They'll report and haul home those things they love to find—and that will enrich your life.