Pili Hunters sticks to its wild roots, while putting the planet first

About five years ago, Jason Thomas was on a kite surfing trip in the Philippines. It was then that he first tried the pili nut (pronounced peel-y) and experienced the powerful flavor for himself. Thomas flew back home with 10 pounds of pili nuts in his backpack and proceeded to sell them along the coasts to other surfers and natural food stores. Once he ran out, he knew these nuts were something special. Eventually, Pili Hunters was born. First starting in Eugene, Pili hunters has been in Bend now for about a year and a half.

Pili Hunters' products are marketed as a prime source of fuel for adventurers—runners, hikers, bikers or those on a special diet. The nuts are packaged in their traditional form, as a butter, as a mix into coffee and more. The company even makes a hand salve from the nut's oil. While its versatility is one quality, the nutritional value is the real catch.

Thomas spends three months out of the year in the Philippines, helping with the harvest and distribution, all while building relationships with the workers there and finding the best new practices for Pili Hunters.

"We're the only ethically sourced pili nuts on the market," says Thomas, as he shows me a photo of a 150-year-old pili tree. "We're seeing a big push of companies trying to do "organic" over there – but you don't have to. They [the locals] are not spraying pesticides on that tree. They are not fertilizing that tree. It's the rich volcanic soil."

Everything about the Pili Hunters' process is done by hand, says Thomas. The hunters climb up the pili trees – which can grow to over 60 feet high – and knock off each nut with a spear-like tool that has a hook on the end, before they're gathered on the ground. From there each nut is cracked open with a machete.

"They are starting to plant some trees, but it's not monocrop style – it's not like an almond farm in California," mentions Thomas. "This is the jungle." 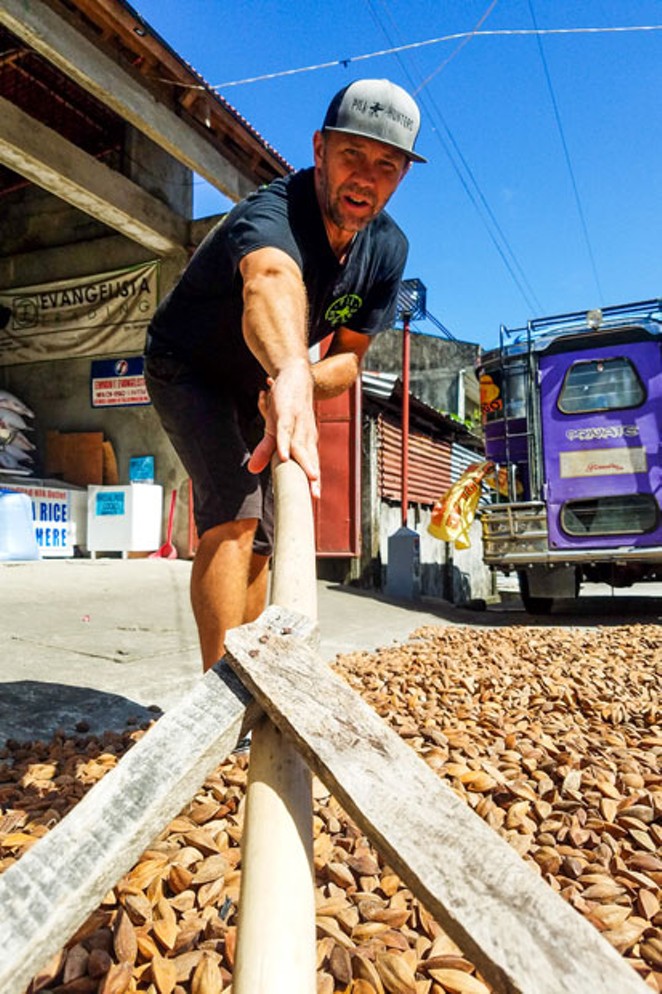 Speaking of almonds, the other advantage to the way Pili Hunters grow and harvest these nuts is that there is zero irrigation work – it is 100 percent rain water, he says. To put that in perspective, the average amount of water used in irrigation on almonds is 3.2 gallons of water per nut, according to a study published in 2019 in the journal, Ecological Indicators. That's a staggering amount of water when you consider how many nuts come in a single bag, and then if you multiply that with how many bags are produced total worldwide—that's a lot of water.

"I just feel like we can do it in a decent way, without f*cking everybody along the way," Thomas says of the company values. "I have an amazing opportunity to do something right."

Everything about the Pili Hunters headquarters in Bend is DIY and aimed at being environmentally friendly. Just as they to try to use every part of the nut to create their products, the company itself is very conscious about the environment: The tables? All leftover doors from a door company that closed across the way. Shipping? All recyclable paper envelopes packed to the absolute brim. The picture of the pili tree he showed me? Printed on a board Thomas found in a church dumpster. Market of Choice and Natural Grocers even give Pili Hunters all of their bubble wrap to use for shipping.

"I'm trying to do the opposite of what everybody else is doing," says Thomas of Pili Hunters' environmental footprint. "We're so wasteful in this country. I'm trying to keep a business going with my mentality. I think if we stay true, hopefully the stars will align. And if they don't, I can still look in the mirror."