The Year the Music Died

It took a decade, dozens of artists, and hundreds of volunteers to transform the Four Peaks music festival from a bootstrap local gathering into a bona fide concert destination. But it took just one rogue virus a few weeks to bring it all crashing down in late March. That's when Stacy Koff, festival founder and organizer, made the decision to cancel plans for the 2020 edition, a festival that was set to be bigger and more ambitious than any previous iteration. At the time, the festival was still over two months away, but most of the hard organizing work was done. Artists had been booked and tickets were already sold for the late June event, most recently held on a farm southeast of Bend. The mostly open-air event draws thousands of revelers who arrive in Subarus and RVs for the multi-day music extravaganza. Festival goers— which include families and music lovers of every stripe—camp and soak in the scene, which includes multiple stages. Music begins early in the day and continues late into the evening.

Eight months after informing ticket holders that the event would be canceled, Koff is still trying to figure out if Four Peaks will be back in 2021. She believes it will be. But she also believes that it will be different than the past few years when event organizers relied on booking marquee national touring acts to anchor the performances.


If the event happens this year, it will be with smaller crowds and a greater emphasis on local and regional acts, said Koff.

"It will look a lot different—a lot smaller," she said. "It could possibly go back to the old-school Four Peaks. "But there is nothing in place, there is no plan."

That could change quickly. Koff said festival organizers were waiting to hear back from Deschutes County officials on Four Peaks' request for its initial gathering permit. That could happen in a matter of days, or it could be a matter of weeks. Even if county officials are willing to sign off on the preliminary request, Four Peaks will have to meet whatever state guidelines are in place for public gatherings. Right now, the state caps events at 50 people. That's just a fraction of the more than 2,000 spectators who came to Four Peaks in 2019.

The wait-and-see approach is not unique to Four Peaks. Around the country promoters, artists and venues are watching public health officials for a sign of when they will green-light crowds to return to concerts and sporting events. For most artists and venues, it's been almost a year since they last took the stage or welcomed fans.

Marney Smith runs Central Oregon's largest venue, the Les Schwab Amphitheater, which typically hosts more than a dozen shows each summer featuring national touring acts. Smith said that 2019 was set to be their biggest year on record, with approximately 20 shows tentatively confirmed for the outdoor concert season. The venue ended up hosting not a single artist.


Instead of putting on shows, Smith and her staff spent the spring and early summer trying to help would-be concert goers obtain refunds for shows that never happened. They fielded angry calls from frustrated fans who couldn't understand why the venue wasn't immediately returning their ticket purchases. (In most cases it was up to the individual artists or promoters to process refunds, but the pandemic-fueled frustration was palpable, Smith said.) 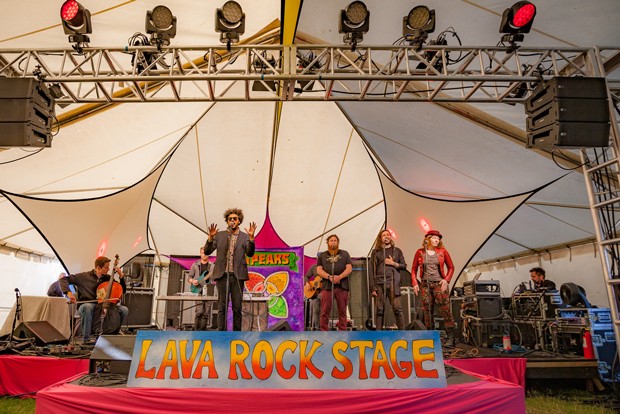 Having to explain to local fans that they couldn't help get their money back while at the same time haggling with artists and promoters whose livelihoods were drying up was a low point.

"It felt gross in a lot of ways," Smith said. "It felt sticky and the immediate reaction (among the public) was distrust."

It wasn't just fans who suffered. The amphitheater drives business to the adjacent stores and restaurants, which were already suffering amid the pandemic. Security guards, vendors and other support staff missed out on work generated by the shows.

The amphitheater has never been the primary source of revenue for the Old Mill District, which owns the venue, but the concerts are an important part of the overall marketing and vibe in the Old Mill, which recently announced plans to upgrade the stage, box seating and upgrade vendor accommodations beginning next year, in hopes of drawing larger acts. Smith points to a study by Visit Bend that pegged the impact of each concert at around $1 million for the larger community.

"We call it the sizzle that fries the steak," she said.

Other promoters also felt the sting of the summer that wasn't. Bend Radio Group owner Jim Gross said his stations produce about 10 outdoor concerts every summer, as well as the Outside Games sports festival. Gross said all the shows were canceled this past year. While the radio stations continued to broadcast, the loss of concerts hurt.

The company managed to avoid layoffs and furloughs, but the margin for error is all but gone. "It took the revenue right out of the machine," he said.

Still, not all music venues were affected equally. Small and mid-size clubs are among those hardest hit by the pandemic. Iconic Northwest venues such as The Showbox in Seattle and Wonder Ballroom in Portland have been idle for nearly a year. Most employees, save owners and a few essential staff, have been laid off or furloughed since last spring when the initial wave of shutdowns rolled out. While other businesses, including bars and restaurants, have experienced phased reopenings with limited operations, clubs have remained shuttered as restrictions on mass gatherings are in effect and touring artists stay home.

For many artists and fans, clubs are the soul of the music business. These are places where rock and roll came of age in the 1960s; the places where punk rock put down its anti-establishment flag in the late 1970s. They are where hip hop emerged from the underground in the 1980s before it hit the mainstream in the 1990s. tweet this

"Our business is gathering. That's what we do," said Derek Sitter, who owns and operates the Volcanic Theatre Pub in Bend's Century Center.

"Even if we are allowed to have 50 people, I just don't feel it's safe until cases are low and the vaccine is flowing."

Like Smith at the Les Schwab Amphitheater, Sitter said he was expecting a banner year in 2020 until the pandemic put everything on hold.

His next touring music act is booked for November, a full 17 months since the initial shutdown in March.

With no source of revenue and rent due every month, many venues around the country face the threat of permanent closure. The pandemic prompted hundreds of clubs across the country to recently band together to form the National Independent Venue Association to lobby on behalf of the industry in Congress. The organization pushed the Save our Stages legislation included in the recently signed pandemic relief legislation. Without the financial safety net, NIVA estimated that hundreds of live music venues across the country could close permanently.

For many artists and fans, clubs are the soul of the music business. These are places where rock and roll came of age in the 1960s; the places where punk rock put down its anti-establishment flag in the late 1970s. They are where hip-hop emerged from the underground in the 1980s before it hit the mainstream in the 1990s.

"They are the places that artists get their start. It's where you book your first gigs and build your fans. It's where you develop the craft and grow," said Joyce Lim, whose New York City-based organization, the Live Music Society, handed out grants this past year to keep small venues afloat.

Earlier this year the Live Music Society handed out 20 grants to clubs around the country, ranging from $10,000 to $50,000. Lim said the organization didn't award any of those to Oregon businesses, partly because of the lack of interest and awareness. Volcanic's Sitter applied but wasn't selected by the committee. However, the organization gave him a small consolation award and encouraged him to reapply for the next round of grants that will happen in early 2021, he said.

Lim said the privately funded organization is committed to handing out $2 million to clubs in mid-sized venues over the next two years.

"Our board feels strongly about these venues and taking care of them," she said.

Support from the stimulus package

The funding from Live Music Society could serve as a backstop for the recently signed stimulus package, which included $15 billion for arts and cultural preservation. It was one of the provisions that President Trump vocally objected to when he initially balked at the bipartisan deal that Congress reached late in December.


The federal Small Business Administration is charged with allocating those funds and many observers, including Lim, expect that it could be months before club owners see a check.

Still, with a COVID-19 vaccine in mass production and a financial lifeline approved, club owners can finally see a light at the end of the tunnel—one that doesn't feel like an oncoming train.

"Last year was going to be our biggest year," said Volcanic's Sitter. "Hopefully, we can pick up where we left off."

Yet, uncertainty remains. Will the fans come back? When will touring acts be able to hit the road? What restrictions will remain in place and for how long? These are all questions that remain to be answered, Sitter said.

"The recovery? I think it's going to be a long time," he said.