They All Float | Film | Bend | The Source Weekly - Bend, Oregon

"47 Meters Down: Uncaged" is shark schlock

Shark movies are, at heart, monster movies. Yes, sharks exist in the world and are much different than say, some weird and creepy creature designed by a filmmaking team, but their goal is the same regardless: killing teenagers. Whether it's a shark, an alligator, Bigfoot or a redneck, they populate horror movies to rack up a body count of attractive people. 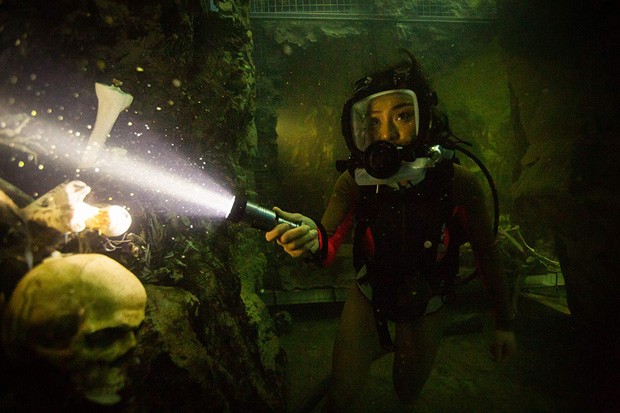 "47 Meters Down: Uncaged" is garbage. Terrible performances are compounded by digital cinematography that gives the entire film a generic, low budget look. The dialogue is so wooden and tin eared that we're unable to care about the cast because they never come across as human beings; just sacrificial lambs waiting for the next shark attack.

Amazingly, the sharks are so badass that it almost makes for a movie worth watching. The slimy story is that four girlfriends who live in Mexico (none of whom are Mexican) all decide to go scuba diving at a recently discovered sunken Mayan city, where they get lost and attacked by sharks.

That should be a killer setup. It's basically "The Descent," but underwater, and with a twist: the only light down there is what archeologists brought with them, so most of the film is lit from our characters' point of view as they desperately search for a way out. This also means the sharks are milky eyed and snaggle toothed, pale and nasty looking and genuinely horrifying to look at.

Every time a shark shows up, it's extremely intense, but the soundtrack makes one of those "BWAAAAAAAAAMP" sounds like in "Inception," so it becomes funny after a while and the sharks all look like old scary blind men that are chasing teenagers out of their Mayan temple—which is hilarious.

The four girls are archetypes: shy white girl, embarrassed black girl, bossy Asian girl and hot white girl. They have no connection to the characters from the original "47 Meters Down," which means this is a sequel in name only, but it does have a lot more going on in the shark department.

"Uncaged" could have been a minor classic just based on how creepy a blind shark looks, and based on some of the sequences with the giant creatures swimming around looking for fresh teenagers, who have to stay perfectly still. All the underwater stuff is genuinely fun, but as soon as the characters talk or try to act like people, the film becomes a parody of itself.

Since one of the leads is played by the daughter of Jamie Foxx and the other is the daughter of Sylvester Stallone, the film feels like one of those direct-to-video '90s action movies that featured Joey Travolta, Don Swayze, Joe Estevez and Frank Stallone.

I can't recommend this movie at all. I want to because the sharks are scary and there are some tense sequences filled with legit claustrophobia, but this is a bad movie. At home, with some friends and booze, this might be a blast and that's probably good enough. Instead of "Netflix and Chill," it could be "White Claw and Sharks."