They're on the Move! | The Source Weekly - Bend, Oregon

They're on the Move!

On birds in winter, and all those robins you're seeing right now

If you haven't seen them, you're either not paying attention, or you're really busy doing something else. It's really hard to miss them, especially if they're pooping all over your deck like they are at my place, or on your car if it's parked under the juniper tree at the edge of your driveway. 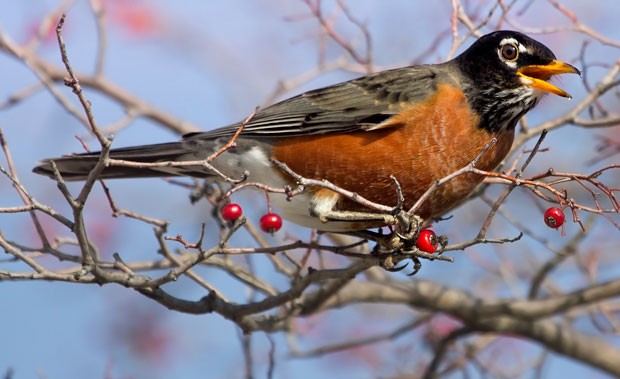 Robins! Yeah, lots of robins! Hundreds of robins, and lots of robin poop, too. You've heard the old story how robins eat juniper berries and then go around flying and running into things, drunk-as-a-skunk, and that sort of goofy stuff. Yes, they do eat juniper berries, along with any other berry they can find. Yes, they do get into stress if they don't have enough water to help them pass the berries through their crop without fermenting and causing them distress. But the business about their getting drunk is a tall tale that's been around so long it's got whiskers, like me.

There are two, no, three distinct populations of robins. Perhaps I should give them their proper name, American robins — inhabiting Central Oregon in any given 365-day year. First, we have the resident robins. They're the ones who defend a territory, raise a family, the males sing a beautiful song all day long and they're ready to do battle with any robin that dares enter their territory — even the one reflected in a window!

Sometimes male robins aren't too bright about battling what they perceive as a competitor for his lady-love's attention and nesting territory. One morning I was aware of a male robin doing battle with something under the eaves of my house, and discovered it was himself.

He was out to kill the reflection of himself in the big window in the front of my house where the bird bath was. I finally had to place a silhouette of a Cooper's Hawk on the window so when the goofy robin came back to do battle with himself, he saw the hawk silhouette first and stopped beating his brains out.

Sometimes male robins aren't too bright about battling what they perceive as a competitor for his lady-love's attention and nesting territory. One morning I was aware of a male robin doing battle with something under the eaves of my house, and discovered it was himself. tweet this

During the annual Christmas Bird Count, it's not uncommon to see 15,000 robins flying around Central Oregon wolfing down juniper berries by the millions. They're also good at finding apples still clinging to the branches and on the ground beneath the trees. If there's one thing we've learned from the robins that inhabit this neck of the woods in winter, it's how vital water is to the welfare of animals in winter.

I'm a big believer in water features that have water for wildlife all year long, and especially in winter. Some animals can eat snow and convert it to water, but even for them it's a close call, especially when the temperature goes down to below zero.

If you don't have a water feature and are thinking of building one, please be sure to install a heater in it so free-running water is available to wildlife all winter. If you want to have a glimpse of how important it is to have fresh water for your own body in winter, take note of how thirsty you are after cross-country skiing for about two hours. I'd come into the house and find myself gulping down a gallon of water after a wonderful day coming back from Bachelor to Sunriver on the cross-country trail.

The third population of robins to pass through Central Oregon takes place in late February to mid-March. These are a mixture of wintering robins moving north from here with "our" wintering robins coming up from the Sacramento area returning to the breeding grounds in Oregon, Washington and Canada. What a conglomeration of robins that is. Most of the males are already in breeding plumage, their bright orange breasts glowing in the morning sun and singing their hearts out with all the spring sunlight around them.

Sometimes, like frosting on the cake, a bunch of Cedar waxwings will be with the robins, both pigging out on juniper berries and coming to a water feature just about sunup. One of our water features is a small pan under an outdoor faucet just outside our bedroom window. I have a heat tape plugged in to keep the water moving in the above ground pipe with a faucet set to drip (loudly) so the water can be heard splashing into the pan from considerable distance.

If you sleep with your windows open as we do, just about sunup, my wife, Sue, gives me a nudge and says, "Hey, Jim, the robins are here and the waxwings are with them." She can hear them talking when they come in for water at dawn, while I, without my Central Oregon Audiology hearing devices, am deaf as a post and sound asleep. But, oh boy! When I put those hearing devices in, my world comes alive once again and there's no more sleeping.

If you can place your water feature so the robins wake you up at dawn, and then have it close enough to your kitchen window so you can also see and enjoy the other morning birds when they come in, it's the best thing in the world. I have the added pleasure of watching the Lesser goldfinches as they come to the thistle feeder and then watching other finches when they come to the dripper.

Then, as frosting on the cake, the Northern flicker—who uses the nesting box in my backyard —comes to the suet feeder and then the nemesis of the bird world comes sneaking in, the big female Cooper's hawk looking for breakfast. The water feature and feeders are birdless for the two hours it takes the accipiter to get her breakfast, time for a nap, and to see what I got on camera when all the activity was keeping me awake.

If you want to ask about your water feature, drop me a line: jimnaturalist@gmail.com and we'll chinwag.