Things Learned Along the Way

Local artist launches a book of illustrations and words of wisdom

Local artist Teafly—who's contributed both cover art and "Artwatch" columns to this newspaper countless times over the years—recently launched a Kickstarter for her first book of illustrations and personal wisdom, titled "Brain Clouds: Things I Learned Along the Way."

Teafly's artistic style is youthful and fun, but the book, she says, was not exactly designed for kids. Rather, it's an exploration of her own journey and what she's gained from life experience. I chatted with Teafly about the book, which debuts during a book launch party Dec. 17. In addition to the book, a companion coloring book is also available for purchase. 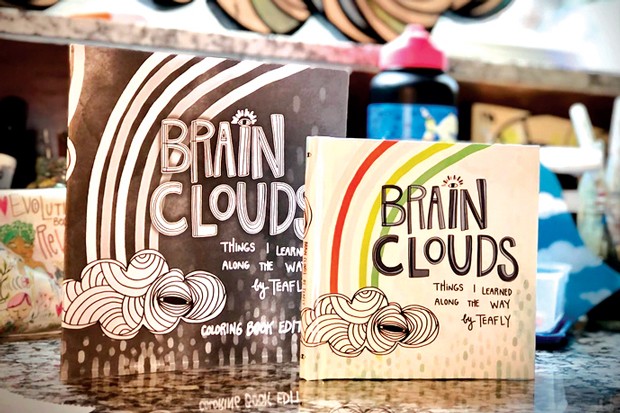 Source Weekly: What is your book about?

Teafly: It's a compilation of things I've learned, so it doesn't have a story. Every page is its own idea; all this work from what I had written over the last few years. Literally, when I was coming home in the airport, I was going through my old writing on my phone and just started pulling things out and then I Illustrated them. They were all things that were like, we're gonna call "life advice," because it's not life advice—it's more of like, this is kind of something that's true about life, that I think is true about life. Every page is its own thing. Some pages are just one sentence. Some pages are a little longer.

SW: What inspired you to write it?

T: I was traveling and I had gone to Meow Wolf [immersive art installation] in Santa Fe. And then the next day I went out to the Ghost Ranch where Georgia O'Keeffe used to paint, and, you know, inspiration goes in waves. I don't always have it. And then I went to the Santa Fe Indian market, this was the 99th year, but should have been the hundredth year. They had to cancel in 2020, but it's the oldest fine arts market of just indigenous artists from North America, and it was incredible—300 indigenous artists from all over.

It was really a lot of culture and three days and the thing I kind of took from it, which is this, the thing I think is always hard to remember, is that I don't have to make big things.

Sometimes you can stop making art because you're like, the idea is too big or like, you feel like you can't get there. You just can't see through it. And so, I thought, well, what if I just made a little thing; it doesn't have to be a big thing.

I found it really difficult to do work during the pandemic. I see people churning out content and I just like I didn’t get it. It was just too, there was just too much muck for me to sift through that. tweet this

SW: The book includes things you learned along the way. How did the current pandemic and its isolation contribute to what you've learned?

T: I think the interesting thing about the pandemic for me was, it's really similar to my everyday life because I tend to not be isolated, but I tend, you know, all artists, we kind of work in solitude a little bit. So I'm so used to being in solitude. The weird thing about the pandemic was it was really uninspiring for me. I found it really difficult to do work during the pandemic. I see people churning out content and I just, like, I didn't get it. It was just too, there was just too much muck for me to sift through that. It takes a while to process and process and process, and then put things down emotionally.

SW: How would you describe your artistic style?

T: I always say I'm very influenced by the natural world and by pop culture. So those two things, you know, and especially pop art—I hope you can see the pop art. But when I say the natural world, you can also see the natural world in my work. I grew up going to New York and Boston. So I just was like so in love with street art and, you know, I'm not a great visual artist, but I'm a visual artist who has a specific style in a voice. It's very recognizable and I just kind of embrace that.

It's weird, because people think of me as a writer, someone described me in something the other day as a writer, you know, and then I've had people introduce me as a photographer. I'm also a performer, right? I also sculpt. So, it's hard to say what my art is. I think it's not easy.

I said the other day to Bill [a friend] I said, well, I guess I'm not a traditional artist, like as a joke, and he said, 'You're actually a very traditional artist, because you don't allow medium to hold you back. You don't do just one thing,' and he was right. Like a lot of artists used to do—like Michelangelo, you know, he painted ceilings and also sculpted, built things. I definitely... I don't fit intoo Bend, as an artist, and I never really have.