Think Outside the Pie | The Source Weekly - Bend, Oregon

Think Outside the Pie

For a family-sized holiday dessert, think outside the pie with a swiss roll—perfect for a small holiday centerpiece. Composed of a simple sponge cake and a filling such as jam and whipped cream, it offers a light dessert after a heavy holiday dinner. The only tricky part: rolling the cake so it features the signature swirl. 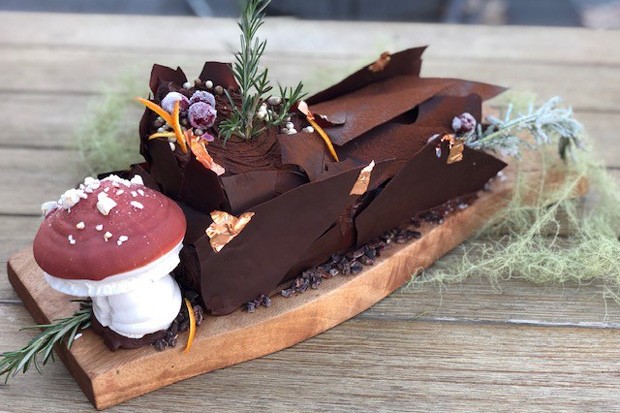 No need for a special swiss or jelly roll pan. Just use a quarter baking sheet, or any mold with dimensions around 13 inches by 9 inches. Butter and line the pan with parchment paper and, according to Foxtail Bakeshop owner and pastry chef Nickol Hayden-Cady, pick a joconde sponge recipe for easy rolling.

"It has so much egg whites in it, and it's light and airy so that you can roll it up and fill it," she told the Source, adding that more of a dense butter cake will likely break. Just be sure not to overbake it. "You want very little browning," she said.

While it's still hot, remove it from the pan and gently roll it up between two pieces of parchment.

"And then I would wrap it in a nice towel and stick it in the fridge until they're ready to fill it," Hayden-Cady said.

Foxtail Bakeshop is making a similar treat: buche de noels, made of a French sponge called a "biscuit" that's also filled and rolled.

"We're doing a whipped hazelnut ganache, and then a little Valrhona 60% ganache in there," Hayden-Cady said. "So, it's a little bit lighter but still has that richness. And then on the outside, we'll have a fun design of chocolate, and then we're going to do a velvet coco spray on it." Foxtail is also decorating with festive treats including meringue mushrooms and candied cranberries.