This Land is Our Land | Outside Features | Bend | The Source Weekly - Bend, Oregon

This Land is Our Land

A local, Latinx-led group forms to encourage participation in the outdoors

A new partnership is aimed at opening up outdoor activities for people who might not otherwise feel confident taking part.

"I want to make the outdoors more inclusive and accessible for people who don't have the tools to get out there, and for the Latinx community in general," says Zavier (Zavi) Borja, who grew up in Madras. In his early 20s, when he moved to Bend, he became interested in outdoor activities like hiking and rock climbing. "I didn't see Latinx representation when I would go into outdoor spaces," he said—so he set out to change that. 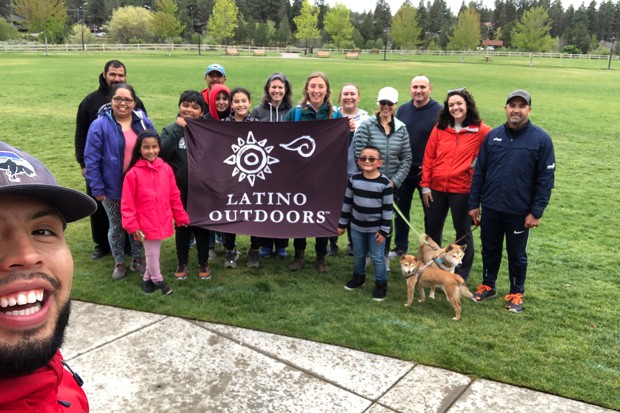 Borja partnered with Latino Outdoors, a nationwide nonprofit with chapters all over the country, to start opening up outdoor activities for Latinx people in Central Oregon. The Central Oregon chapter held its first outing in April. Latino Outdoors is not the first organization to offer something like this—but one thing that set it apart is that the organization and all its chapters are Latinx-led.

In Bend, Borja says many of the people he's working with don't have fancy gear, may not be familiar with trails in the area and may not get outside much—for fun at least. Some may spend their time working outside, so the idea of also spending their free time outside seems strange. And for some—especially parents, the outdoors seems like a dangerous place.

"A lot of organizations try to push for diversity in the outdoors, but they go for too much," Borja explains. "To a lot of Latinx people, Smith Rock seems like a dangerous place because all they hear about are people dying or people getting into accidents there."

Borja has experienced this with his own parents. They support him but don't entirely understand his passion for the outdoors. Borja says his mom still worries about him every time he does an outdoor activity.

"She thought I was going to get killed!" Borja says, laughing.

For the first Latino Outdoors outing, Borja led a group of about 20 adults and children along the Deschutes River Trail. It was a rainy Sunday—but that didn't stop them, Borja said.

His short-term goal for Latino Outdoors is to meet people where they are at and get them comfortable and excited about going outside. He wants people to understand that they don't need trekking poles or trail-specific shoes or lots of gear to get outside.

Borja is committed to reminding Latinx people that outdoor spaces belong to them, too. tweet this

There are many barriers to getting Latinx people outside, Borja says, such as language barriers, socioeconomics, or being in a cultural climate that might not be friendly to non-white people. Borja also realizes that some barriers are generational, saying many Latinx kids aren't being taken outside by their parents at a young age, so they miss out on an early intro.

Every outing through Latino Outdoors involves some sort of cultural activity, and there's always a leader who speaks Spanish.

"I want people to have a sense of community and feel safe in the outdoors with Latino Outdoors so that they can go outside on their own," he says. Latino Outdoors events are aimed at Latinx people, but everyone is welcome, Borja says. His long-term goal is to have Latino Outdoors leaders in all the towns in Central Oregon, partly to cut down on transportation issues.

He also wants to host events that are aimed at different age groups, and to offer leadership opportunities for older kids to get involved and learn valuable skills.

Borja is committed to reminding Latinx people that outdoor spaces belong to them, too.

"I want to create a sense of stewardship over time, beyond just getting people outside," Borja says. "The overall goal is recreation in all sectors, but people have to buy in and have a sense of ownership for that to happen."