In the mid-1950s I was working with Bob Couch cutting lodgepole on the west side of Newberry. One morning I fired up the old corn-binder, checked the tie-downs and was out on the logging road in minutes. When I pulled onto the main paved road, I'd be on my way to Hwy. 97 and then on to La Pine. I was rounding the first turn, when, lo-and-behold, right in front of me was a passenger car parked right in the middle of the road!

I did some of the fanciest driving I've ever done to miss that car and went up into the trees, somehow avoiding every one of them before coming to a stop. I shook my head as I passed all the trees I'd missed, and just got madder and madder as I headed for that car, running around behind it and pulling up to the driver's side, ready to eat the driver. As the window slowly came down, I looked at the driver and all the anger and frustration went out of me like a deflated balloon. 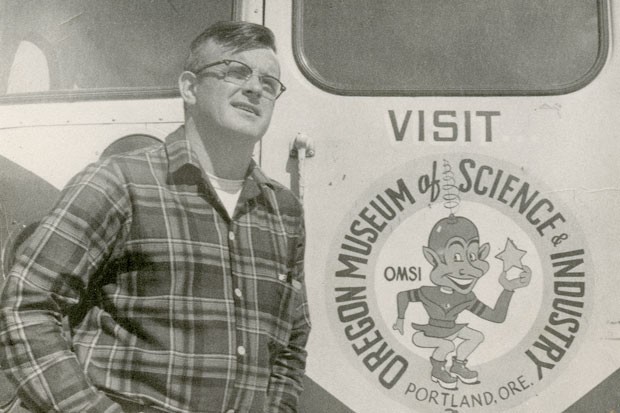 Seated in the driver's seat was a skinny old guy who had to be 100. Right next to him was his thin-as-a-rail tiny wife. I was about to ask him what he was doing in the middle of the road, when he looked up at me out of his foggy old eyes, and said, "Have you seen Ralph Mason?"

I couldn't believe it! "No sir," I said, clutching the top of the window in a death grip. "I wouldn't know Ralph Mason if he jumped up and bit me on the kneecap! Why is he so important?"

"Well, we're out here on a Gee-socker weekend and Mr. Mason was showing us the geology of Newberry when we lost him yesterday on a dusty road. I got turned around and now we don't know where we are."

I was dumbfounded. "You been out here all night?" I asked him. He sort of whispered yes, while his dear wife slowly nodded her head.

I told them to follow me to Hwy. 97 where I'd turn left to head for La Pine, and they should go right to Bend.

But that's not the end of this story...

In 1960 I went to work with the Oregon Museum of Science and Industry as the staff naturalist, and was assigned to the Education Department, run by a most wonderful woman by the name of Dorothy Mason.

Yep, you guessed it, Dorothy's husband was Ralph Mason, and he and I were scheduled to meet on a tour of the Columbia River lavas.

The best moment I ever spent with my new and dear pal, State Geologist Ralph Mason, was on the first trip he took me on with a group of high school kids to learn about the lava flows and Bretz/Missoula floods of the Columbia Gorge.

I was driving the museum's old 22-passenger Ford bus OMSI named "The Space Cruiser," headed for Hood River. As we approached the first crossing of the big overhead high-tension lines coming from the Bonneville Power grid, Mason suddenly jumped out of his seat, grabbed the PA microphone and shouted, "Stop the bus! Stop the bus!"

I did, fearing something was bad wrong and pulled off the road.

"Now the reason I asked Mr. Anderson to stop is I wanted you to notice those big power lines held up by those huge towers." And he went on...

"There are thousands of volts of electricity traveling in those huge wires, most of it going directly to California." He paused to make sure everyone was listening. "Now we're going to have to travel under them as we go on to Hood River, and each time we pass under those powerful wires Mr. Anderson is going to slow the bus down to 22 miles per hour, and we all must wet our pointing finger and place it against the glass window on the side of the bus."

I looked back at the kids and could see every one of them had licked his or her finger and was holding it against the glass.

I pulled back on the main road and as soon as we were up to the assigned 22 miles per hour, I wet my finger and placed it firmly against the window. We passed under the high-tension wires traveling at exactly 22 miles per hour, but nothing happened; absolutely nothing. I went on to the next wide spot, pulled off the highway, and as I did, Mason got out of his seat. He raised the microphone to his mouth, and with a slight grin, asked, "What, you didn't feel the pane?"