Photographer discovers community, one stranger at a time

We're all searching for something—a purpose, a home, or a group to call our own. That feeling is one that sticks around for most of our lives. Joshua Langlais, of Bend, is trying to help connect those dots for not just us, but himself as well.

Originally from Portland, Maine, Langlais is the creator of "A Community Thread." The project, one he says isn't necessarily art, but a people project with various art elements, is a catalog of interviews between Langlais and a complete stranger, usually referred by the previous interviewee. Those artistic elements come in the form of portrait photography, a podcast and the print version of the project itself.

"I was going to be an adventure photographer," Langlais recalls of his earlier years. "But then I got to photography school and just realized it wasn't for me. I was just more interested in people."

In 2008, Langlais started working on a project titled "I Heart Strangers" in which he photographed strangers for 625 straight days. When he stepped away from that, Langlais felt a creative block for much longer than he would have liked. Then when the idea for "ACT" came, he dove right in. Langlais had only been in Bend for two weeks when he got the idea. "I didn't know anybody."

One of the main messages of "ACT" is to help build that sense of community and humanism. Langlais' interest in the human condition isn't because he always had an affinity with community, but rather, a lack thereof. "I Heart Strangers and A Community Thread aren't projects for the people who are satisfied," Langlais says of his upbringing and inspirations. "I think the hunger—the poverty of community has really been the thing to make me look and work for it." Early on I asked Langlais how he defined community, knowing he had probably been asked that many times—but even after two years' worth of interviews, the broadness of community still finds ways to stump him.

The direct goal of "ACT" is one that isn't perfectly defined either—which is something Langlais enjoys. One motive however, is to try and remove stigmas around the idea of community. While on the outside some community events may seem, as Langlais says, "square," there should be a certain appeal to understanding those around you. Especially in a time where a lot of society has become divided, being able to ignore the lines drawn in the sand might be beneficial. "If somebody wants me to sign a petition, I want to know about it. I want to know more than your two lines," Langlais says as he dissects today's political landscape. "And I think that's what I want to know about people. I want to know more than your two lines." Local politics are apparently important to Langlais, as he also just ran for Bend mayor this past election cycle. 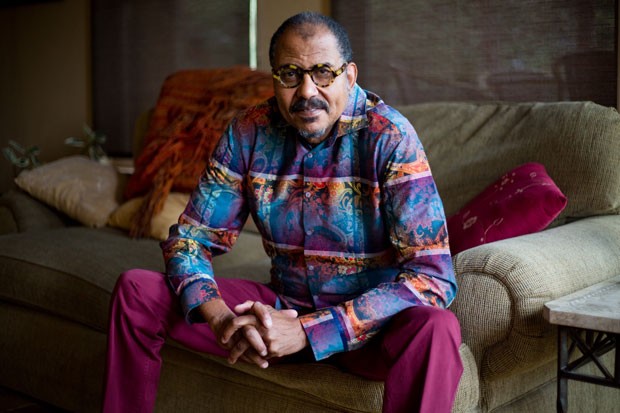 "ACT" breeds diversity through the stranger referrals, and its randomness keeps the lens out of Langlais' hands as a way to not search or focus for anything in particular. This is what helps create that genuine first encounter. "I show up at someone's house without having ever met them. I often don't know how old they are, what they look like. Anything. It's all pretty fresh and raw." Langlais has just begun gathering interviews for year three, so he's excited to be back at it.

At the end of our conversation I brought up how it felt to see a stranger I previously met in passing, and the different things I remembered about our interaction. "I think that stuff really matters," Langlais responded in true full circle fashion. "I think that's community. You getting excited about a connection you have with somebody and wanting to share that."

A Community Thread
On display until Feb. 3
at The Commons
875 NW Brooks St., Bend
joshualanglais.com